Commission Looks to Fix Up Atlanta Highway, Lexington Road and Other Areas 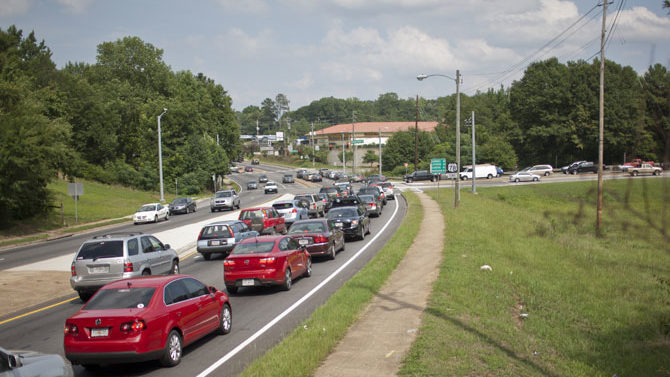 The Athens-Clarke County Commission is taking another crack at creating special tax districts all over the county to encourage the redevelopment of blighted areas.

Last fall, Mayor Kelly Girtz proposed tax allocation districts for the Newton Bridge Road corridor and an area stretching from the eastern end of downtown along North Avenue to the Loop. However, commissioners said they felt rushed and wanted to consider other locations as well.

TADs are an economic development tool intended to encourage redevelopment in a specific area. A tax allocation district—also known as tax increment financing—freezes property taxes in a blighted area for a fixed period of time; then, taxes collected from new development are devoted to infrastructure improvements within the district, such as roads, sidewalks, parks or water and sewer lines. After the period ends, the local government and schools collect the full amount of taxes.

Girtz identified six potential locations for TADs. “These are places we care about in our community, where we’d like to see more quality development,” he said.

• Georgia Square Mall, where the county could work with the owner or another developer to build housing, a park and a transit hub, convert outlying buildings to mixed use and fill empty retail spaces with bars and restaurants.

“You could imagine at some point the mall becoming almost another downtown,” Girtz said.

• West Broad Street and Hawthorne Avenue, where the county could upgrade intersections and improve bike and pedestrian connectivity—for instance, by building a greenway on the Middle Oconee—to encourage higher-density apartment developments that include affordable housing.

• The east downtown or “River District” area, where a TAD could capitalize on the new Classic Center arena and associated parking deck and senior living facility.

• North Avenue near the Loop and the Lexington Road/Gaines School area, where bike and pedestrian safety improvements could encourage mixed-use and mixed-income housing and commercial redevelopment.

Two types of TADs are possible: a geographical area where ACC slowly accumulates funds for improvements, or one tied to a specific project. In the latter scenario, ACC would sell bonds to fund improvements and pay them back once the development is completed. Or, the county could declare an area a “redevelopment zone” and solicit proposals from developers for a specific project that would meet a community need like affordable housing.

“You’ve got a bird in the hand, willing to commit an amount certain, and then you can borrow the funds to pay for the improvements, or you can do a geographic [TAD] and let it accumulate,” Manager Blaine Williams said.

ACC will solicit public input online this month, then discuss potential TAD sites in July. The whole process must be completed by the end of the year, when property values are set for tax purposes.

Proposals include improved signage and an access road from Lexington Road to Ben Epps Airport, sidewalk connections from neighborhoods to bus stops, a traffic signal with a crosswalk at the county jail, other intersection improvements and multi-use trails from Satterfield Park to the airport and Southeast Clarke Park.

Similarly, options for Atlanta Highway include bus stop improvements and filling in sidewalk gaps, along with realigning the Mitchell Bridge Road/Timothy Road intersection, removing the slip lane behind the Pepsi plant and adding signage on the right-turn-only lane into the mall.

The studies did not include the Loop interchanges on Atlanta Highway and Lexington Road because the Georgia Department of Transportation is already planning to rebuild them, Doster said.

Am I a Jerk for Jerking Off?