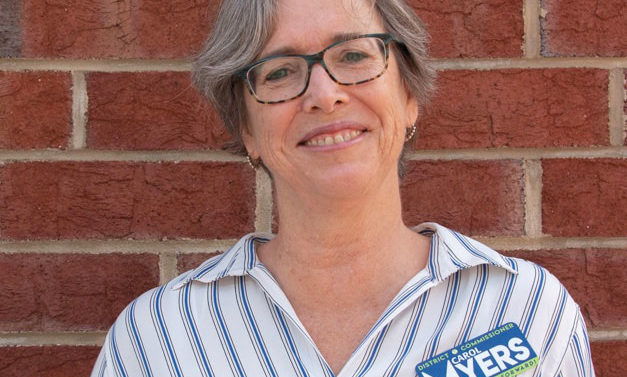 “I’m running because I care about the Eastside, and I want to make it thrive,” Myers said in a news release. “I want my children and grandchildren—and all of us and our families and friends—to have a bright future here on the Eastside and throughout Athens. That’s why I’ve spent years as an active community advocate—listening, asking questions, building partnerships, getting things done. I’ll be a strong voice for the Eastside, for all of Athens.”

Myers is a retired teacher and administrator at Athens Tech and has lived in Athens for 35 years, including 24 years in District 8. Her daughters attended Athens Montessori and Cedar Shoals and Classic City high schools.

She is currently chairperson of the Athens in Motion Commission. She was a leader of the successful 100% Athens Renewable Energy Initiative, which lobbied the commission to commit to clean and renewable energy and sought to include funding in SPLOST 2020. She’s been active with Envision Athens, the Bike Pedestrian Master Plan Citizen Committee, the SPLOST Citizen Advisory Committee and Bike Athens. According to her campaign, she is also an advocate for a just criminal justice system, for more investment in local infrastructure and for improved emergency ambulance service.

“I decided to run because I still have more to give to my community,” Myers said. “I was in a very fortunate place to retire from Athens Tech at a young age. After four years going through some life transitions and riding my bike a lot, I’m ready for more.”

Also running are couples therapist Andrea Farnham—who recently challenged her opponents to a debate at the Clarke County Jail to highlight felons’ loss of voting rights—and Kamau Hull, a lawyer who lost to John Knox in an Eastside school board race in 2016.