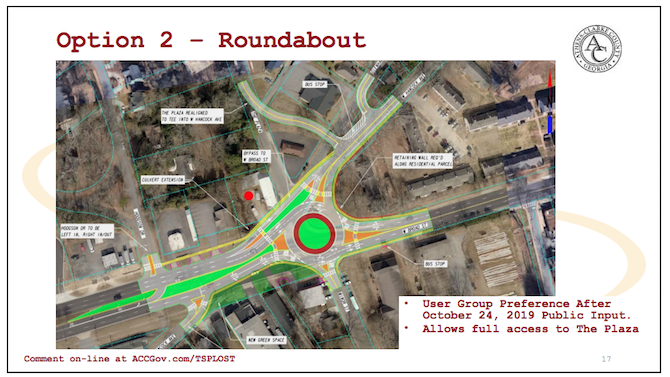 A roundabout at one of Athens’ busiest intersections, Broad Street and Hancock Avenue, will vastly improve safety for both drivers and pedestrians, a consultant told Athens-Clarke County commissioners last week.

The Georgia Department of Transportation has offered to kick in about $2.7 million for the roundabout. But commissioners put off a decision in May after raising concerns about closing off The Plaza when residents hadn’t been consulted and access to a church, among other issues.

After additional public input, consultants and SPLOST officials came back Nov. 12 with revised plans for the roundabout. Commissioners are seriously considering two options: Option 2 would reroute part of The Plaza behind a barber shop so that it intersects with Hancock Avenue at a total cost of $5.8 million. Option 6 would move the street to the west through several properties, including a plumbing business, to align it directly with the roundabout, at a cost of $6.8 million.

While GDOT is primarily concerned with moving cars, the roundabout would also benefit pedestrians trying to cross seven-lane Broad Street. “Yes, GDOT is looking at it and funding it as traffic improvement, but we think it is very much also pedestrian improvements,” SPLOST Administrator Keith Sanders said.

Roundabouts reduce pedestrian deaths by 80%, said Mark Lenters, a consultant with Kimley Horn, because they slow traffic and reduce the distance people have to cross on foot at one time. “Crossing at a traffic signal isn’t as safe as we think it is,” Lenters said, because drivers who are turning are usually looking in a different direction, so traditional intersections provide a false sense of security. Roundabouts also reduce crashes between vehicles, he said.

And while vehicle speeds are slower, roundabouts also make traffic flow more smoothly. “You don’t get a hurry up and stop effect,” Lenters said. “You actually improve travel times.”

While some driver education would be needed, people tend to grasp roundabouts instinctively, and wayfinding signs can help, Lenters added.Other benefits include the ability to add greenery and create a sense of place. 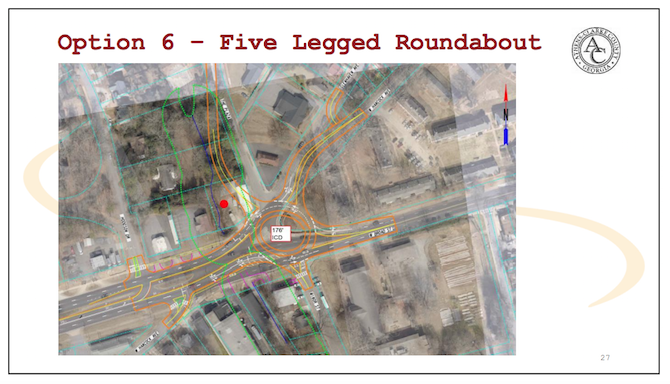 “If you try to hit a blend, it’ll fall in favor of Option 2, because it provides the capacity, it’s reasonably safe—we’ll raise the crosswalks, we’ll mitigate some of those concerns—and it’s costwise a cheaper option.”

Commissioners Tim Denson and Andy Herod said they’re willing to spend the extra money. “This is something that might be here for 50 or 75 years,” Herod said. “It’s a lot of money, but at the same time I want to do it right.”

However, Commissioner Melissa Link said she favors Option 2 because Option 6 would require piping a stream, and the less expensive option would leave $735,000 for other traffic calming projects in the West Broad area. With Option 6, ACC officials would have to find an additional $300,000. Currently $4 million is allocated for West Broad in TSPLOST, but GDOT funding wouldn’t be coming until 2024, so ACC could tap the next round of transportation sales taxes.