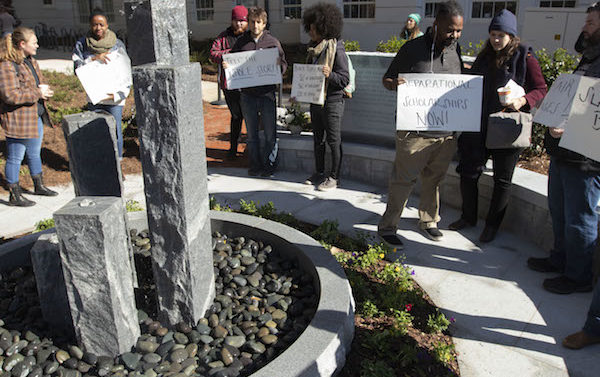 An ad hoc committee of University of Georgia professors issued a scathing report last week on the university’s handling of remains likely belonging to enslaved people that were discovered during the expansion of Baldwin Hall.

The report contends that UGA administrators didn’t do their due diligence before starting the construction project, violated academic ethics by refusing to consult with the community after discovering the remains, paid nothing more than lip service to research projects involving slavery on campus, and attempted to intimidate professors who spoke up about the university’s missteps.

“Public and private institutions of higher learning across the country are proactively acknowledging legacies of slavery, while UGA is conspicuously avoiding anything beyond minimal acknowledgement,” the report says. “History does not go away: It shapes the world of the living and becomes more insistent when it is ignored. UGA thus fails to acknowledge its past—present now in the Baldwin Hall remains—at the cost of its local, state and national reputation.”

The report recommends apologizing to those who may be descendents of the individuals who were unearthed; hosting town hall meetings on what to do with remains that are still buried in the Baldwin Hall area and further DNA testing on the remains that were moved; that the administration apologize to Laurie Reitsema, a junior anthropology professor who many faculty members believe was unfairly attacked by UGA spokesman Greg Trevor in the Athens Banner-Herald; and that UGA acknowledge slavery on campus by, at minimum, joining the Universities Studying Slavery consortium.

The full report took a year to create and is about 40 pages long, with another 80 pages of appendices going into more detail about various topics. It’s available on the Franklin College Faculty Senate website under “agendas.”

The Faculty Senate was initially supposed to discuss the report at its Apr. 16 meeting, but that discussion was pushed back until Apr. 23. “When you see its bulk, you will understand we’ve not been idle,” the committee chairman, English professor Christopher Pizzino, told senators.

The Senate did discuss the case of Irami Osei-Frimpong, the philosophy PhD student and teaching assistant who came under conservative fire for remarks on race earlier this year, and now faces a disciplinary hearing related to omissions on his application to graduate school. Though not by name—although his case has been widely discussed in the media, and he waived his privacy rights, presenter Janet Frick, a psychology professor, declined to use his name out of an abundance of caution.

After summarizing the facts of the case, which were published in last week’s issue of Flagpole, Frick went on to say that the university of administration appears to be using the student code of conduct to appease right-wing critics by silencing Osei-Frimpong’s protected political speech. “The issues are larger than any one student or any one department,” she said.

Frick asked the Senate to pass a resolution stating that a department should be notified when one of its students is being investigated; calling on the administration to support freedom of speech—even speech critical of the university; and recommending that the Office of Student Conduct reconsider penalties for political speech. The Senate’s executive committee is crafting a statement that also will be voted on Apr. 23.

Perhaps coincidentally, a memo from Chancellor Steve Wrigley and the Board of Regents’ lawyers went out last week reminding faculty and staff that the First Amendment prohibits public universities from punishing individuals “solely for engaging in otherwise protected expression.”