The Rent Is Too Damn High in Athens 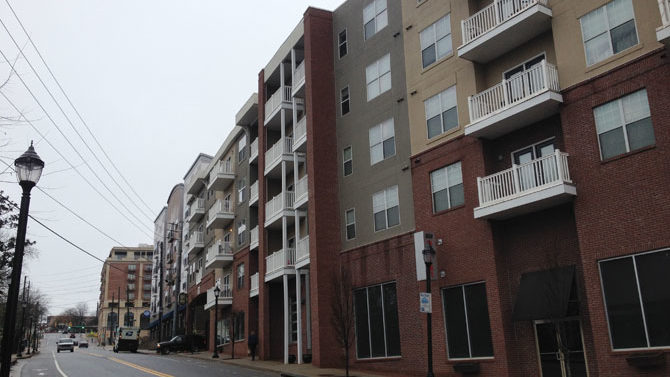 Athens residents who grow up in poverty have little chance of escaping it, according to a recent study. Exacerbating the problem, another study found that housing prices in Athens continue to spiral out of reach of many families.

The economic mobility study found that poverty—especially in Athens, and especially for minorities—has a “sticky floor,” according to consultant Kyle May of planning NEXT. “It’s hard to get off that first rung,” he told Athens-Clarke County commissioners at a Feb. 12 work session. Less than 5 percent of Athens children born into families in the bottom 20 percent of income make it into the top 20 percent as adults. And only 50 percent can expect to earn more than their parents, down from 90 percent in 1940.

In other words, the American Dream is dying. “Basically what we’re referring to is a better life through striving—the harder you work, the higher you rise,” May said. But that’s no longer the case.

Whether it’s perception or reality, Athens employers believe that local residents often lack the “soft skills” to succeed in the workplace, May said, and so they’re casting an increasingly wider net looking for employees, even hiring people from as far as away as DeKalb and Walton counties rather than Clarke.

The study didn’t go in-depth into the effect UGA, the county’s largest employer, has on local wages, to the consternation of Commissioner Melissa Link. UGA is “a unique component that plays into a lot of this,” May told her. “There’s work to be done in terms of bringing UGA into the fold and understanding their impact.”

The next step is to hold an Athens Economic Mobility Summit to present the findings to the public and discuss solutions. “Starting today, we’re not going to see results in two years,” May said. “It’s a long-term project.”

A separate but related study released this month—also done by planning NEXT, an Ohio firm that produced the Envision Athens community master plan, in conjunction with the Georgia Initiative for Community Housing’s Athens team—focused on housing costs. That study calls for redeveloping “challenged” apartment complexes to increase access to affordable rental housing.

Almost half of Athens residents are “housing burdened,” according to another presentation May gave at the work session, meaning they pay more than 30 percent of their income in rent. One reason is poverty: Athens has a 28 percent poverty rate, not counting college students; 44 percent of renters make less than $20,000 a year, and 68 percent make less than $35,000. Another is a lack of housing stock: While Athens’ population rose by 7 percent from 2010–2017, the number of housing units rose by only 2 percent, and the Athens Housing Authority has a waiting list of more than 2,700 people. In addition, the majority of newer apartment complexes were built for college students. Athens is also hamstrung by being the smallest county in Georgia, geographically.

“Growth leads to speculation, and speculation leads to changes in price and availability, and supply and demand,” May said. Later, he added that “this is a consequence of your success.”

The new study echoes a workforce housing study Athens-Clarke County commissioned in 2016. While the GICH study focused mainly on the rental market, the 2016 study found that a lack of single-family housing in an affordable price range was forcing working families to live in surrounding counties. “There is a desire to live in Athens, but there is not a product that meets that demand,” May said.

The greatest need, May said, is housing for those families that the U.S. Department of Housing and Urban Development defines as “low income,” which for Athens means an income of $46,500 a year or less. The study’s recommendations include building more duplexes and triplexes, providing incentives for developers to include below-market-rate units, creating a special revenue fund for affordable housing and beefing up code enforcement so that existing affordable housing remains safe and doesn’t fall into disrepair. All of this should be done with an eye toward ensuring that people aren’t displaced from their neighborhoods, the study says.

In addition, commissioners have already signaled that they’ll include $45 million for affordable housing on the SPLOST 2020 project list, which will go before voters to renew a 1 percent sales tax in November. That money would go toward developing mixed-income, mixed-use communities, including both rental units and owner-occupied homes. Those developments would be similar to Columbia Brookside, where the AHA partnered with a private developer to demolish the Jack R. Wells public housing project and replace it with an equal number of public housing units, plus additional subsidized and market-rate units and a senior living center.

HCD, the AHA, UGA, the Athens Land Trust, Athens Area Habitat for Humanity and the nonprofit Advantage Behavioral Health Systems were among the organizations that participated in the study, in addition to private real estate agents.