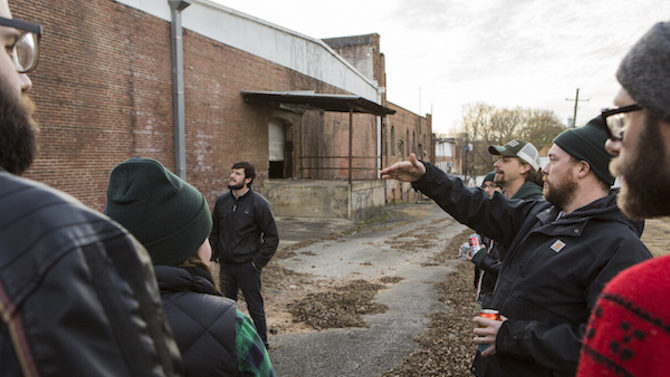 A request to reduce the number of apartments in a redeveloped Boulevard mill turned into a debate about affordable housing at last week’s Athens-Clarke County Commission meeting.

Developer Russ Crump brought plans for Southern Mill, a former denim factory off Chase Street, back to the commission for the third time in six years. While he had originally proposed converting some of the mill buildings into apartments, now he wants to utilize them as commercial space.

The market has changed, architect Scott Haines told commissioners. Brewery Creature Comforts is occupying the existing commercial space and has an option to buy more. Meanwhile, recent heavy rain is causing the buildings to deteriorate quickly. One wall fell in the previous weekend, Haines said at the Aug. 7 meeting. “Right now, we’re in a fight with this site,” he said. “We have to get this stabilized soon.”

The latest version of the plans still calls for new construction of about 200 bedrooms—half the original proposal—but Crump could also build none. That didn’t sit well with some commissioners, who pointed out that ACC’s comprehensive plan calls for denser development in areas like Southern Mill, especially affordable “workforce housing.”

“We’ve spent so much time talking about how we want density near the urban hub as a way of preserving our green belt,” Commissioner Andy Herod said. “The more we downzone residential property, the greater the pressure. People are coming here, and we have to put them somewhere.”

But any residential units in the development are likely to be more high-end luxury student apartments, which the community doesn’t want, Commissioner Melissa Link said. “This is an extremely expensive project,” she said. “The primary goal is to rehabilitate and preserve a historic mill complex.”

Herod, a University of Georgia professor, shot back, “I find it amazing there is so much prejudice against students.” They have the right to live anywhere they want, he said.

Link met with developers to hash out concerns related to the project’s new zoning of commercial-neighborhood. (It was previously zoned multifamily.) Several uses that are usually allowed in C-N zones will be prohibited, including hotels, hospitals, cemeteries, mortuaries, laundries, personal care homes and auto repair shops.

“The vision is this will be a bustling mixed-use commercial center that will very much directly serve the surrounding neighborhood and bring in new businesses [and] new folks to experience this little chunk of Athens history,” Link said.

Commissioner Sharyn Dickerson added a requirement that the developer work with the Athens Land Trust to prepare a report on whether it is feasible to build affordable housing on the site, how much in subsidies it would require and possible funding sources. Crump’s representative, local land planner Jon Williams, said he would agree to write the report within the next 24 months.

The rezoning, with Link and Dickerson’s additions, passed unanimously.

The commission also approved a master plan for Bishop Park by a 6-4 vote. The park is more than 40 years old, and many facilities badly need updating. The plan calls for reconfigured parking, better stormwater drainage and new amenities like a splash pad, but the centerpiece is a new, larger gymnasium, to which Commissioner Jerry NeSmith objected, saying the money would be better spent on a new park for the westside. There’s no money to implement the plan, but it could be funded in the next round of sales-tax projects scheduled for a 2019 vote.

Commissioner Mariah Parker’s proposal to televise work sessions passed, as well. Work sessions—where commissioners hear presentations from staff and often make informal decisions on which they later vote—are currently held in the Dougherty Street building that houses the planning department. In October, they’ll be moved to the commission chamber in City Hall, which already has the equipment to televise meetings. ACC televised two work sessions in February as a pilot project.

CCSD Will Ramp Up Teacher Recruitment and Retention

The Clarke County Board of Education had a long list of personnel recommendations to approve at its Aug. 9 meeting. Board member Greg Davis wanted to know, why is the district still hiring people three days after school started?

The job market is tight, Means said, and CCSD needs to start the hiring process earlier, perhaps by using its mid-year adjustment from the state to send recruiters to job fairs. Retaining teachers is tough in Athens because it’s an urban county surrounded by suburban counties that don’t have the same challenges, and it’s a college town, so recent college graduates might stay awhile but never put down roots, Means said. Georgia as a whole also has a shortage of teachers, he said.

One solution might be to offer signing bonuses, as many districts do, or bonuses to teachers who stay, especially the special education teachers whose jobs are the toughest, Means said. “We have to be more creative in the incentives that we use, but this is a challenge facing everyone right now,” he said.

At the meeting, Means also elaborated on his philosophy of social justice and equity, shortly after new statistics were released showing that black students score far lower on language and math standardized tests than their counterparts, and are more likely to be disciplined.

Some students need extra attention, but that doesn’t mean setting others aside, Means said. For example, he said he’s not satisfied with white students’ 67 percent proficiency, given the education level of many white parents in the district. “We have islands of excellence, but we want the entire school system to be excellent,” he said.

Means unveiled a new logo—“Better Every Day”—with rays of sunshine symbolizing hope. He showed the board a promotional video highlighting the fact that the district has just 2,280 days from the time students enroll in kindergarten to graduation to make an impact on their lives. “There’s a level of urgency we all feel,” he said.