Former Downtown Shoe Store Will Be Turned Into Recording Academy 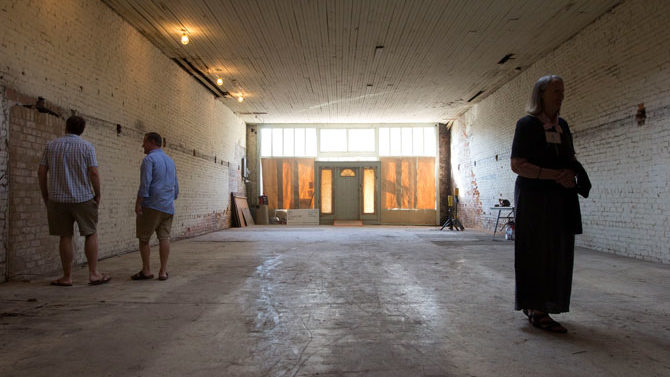 Downtown Athens is getting a new business, and it’s not a bar.

The city had abandoned the alley decades before, and the business on Clayton Street bought the building behind and joined the two businesses. In the 1950s, Lamar Lewis Shoes moved next door to the space now housing Aurum. Upstairs, there had been a hallway between the two businesses and offices for an accounting firm. In the 1990s, Aurum turned its part of the upstairs into residential space, but the shoe store did not. The back of Lamar Lewis Shoes, which faced Washington Street, was used for storage.

Andrew Ratcliffe, a recording engineer and musician who lived for years in Oxford, MS, has bought the Lamar Lewis building, as well as the building on Washington that housed the brewpub Copper Creek. According to Athens-Clarke County public records, Ratcliffe paid $820,000 for the Copper Creek building and $1.82 million for the Lamar Lewis building.

By the fall of 2019, Ratcliffe says, he will be running Tweed Recording out of the buildings. In their 11,000 square feet, he plans to have classrooms, recording studios and administrative offices. The front of the school will be on Washington. On Clayton, there will be space to showcase local musicians and artists, the history of music and recording in the Southeast, and rental space for private events.

Renovation and restoration is being done by Character Built Construction, and Studio BNA Architects is handling the design. Ratcliffe plans to keep the 18-by-18 concrete tiles on the front of the Lamar Lewis building. They were made by a local company, Mathis Construction.

“I think it’s going to be a great asset to downtown,” says David Lynn, director of planning and outreach with the Athens Downtown Development Authority. “They’ve taken over two buildings that would have been bars. It’s a great thing for Clayton and Washington streets.”

A native of Atlanta, Ratcliffe expects to have 32 students for each 20-week session—16 in the mornings and 16 in the afternoon. The 600 hours of instruction will provide them with the equivalent of an associate’s degree, he says. Instructors will be “from all over.” According to a press release from Ratcliffe, Grammy Award-winning producer John Snyder of Loyola University and Tim Hall, who teaches at the Art Institute of Nashville, are collaborating with him on the program.

There will also be a front-of-house mixing school based in the Winterville Auditorium, soon to be restored with a grant from the Fox Theatre in Atlanta. Tweed will provide the auditorium with a new sound system.