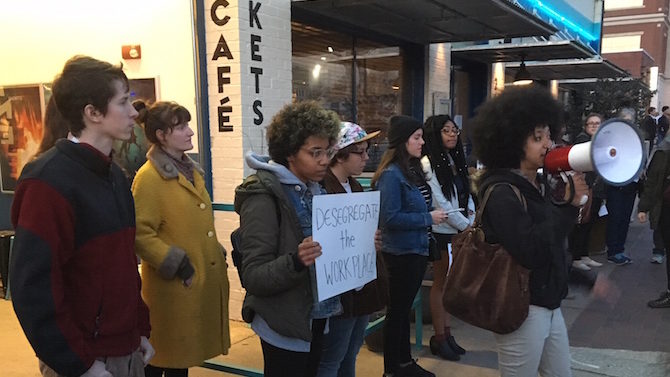 Several former employees of Ciné and Daily Groceries Co-op, along with supporters and United Campus Workers of Georgia union members, formed a picket line outside the Hancock Avenue movie theater Friday night to bring attention to what they called discriminatory practices at the two local nonprofits.

No, Ciné is not serving a n****rita like General Beauregard’s, but former employees KyKy Renee Knight and Marie Uhler said the theater has created an unwelcoming environment for people of color and caters exclusively to an upper-class white clientele.

Knight said she started as a bartender last May but felt “isolated” and “alienated” by the lack of diversity on staff. As a result, she said she tried to quit in September but was convinced to stay. At her urging, Ciné held a diversity workshop that, according to Knight, involved “racially violent interactions” and a “very difficult and traumatic series of exchanges that left me feeling sick and targeted.” A job as an outreach and diversity coordinator she said she was promised never materialized. Knight said she was fired soon after, ostensibly because of a scheduling conflict, although she said she had told management the conflict had been resolved.

Knight (who is black) and Uhler (who is white) also criticized Ciné’s choice of films, saying that female, foreign and minority filmmakers are underrepresented. For example, Uhler said staff resisted the idea of screening Black Panther (although it did opt to show that movie and worked with Haven Charities to offer free screenings to underprivileged youth; other recent offerings have included post-Oscar second runs of Jordan Peele’s Get Out and Guillermo del Toro’s The Shape of Water, as well as A Wrinkle in Time, the first Hollywood blockbuster directed by a black woman, Ava DuVernay). In the midst of a $2.5 million fundraising campaign to buy its building, Ciné has “whitewashed film and event programming” to raise money from “the country-club crowd,” Uhler said.

“Basically, the co-op has serious equity problems,” former employee Rashaun Ellis said. “The good news is… they’re aware of the issues, they know what’s up, and they’re committed to addressing the issue.”

Ellis, who is African American, said she was essentially tricked into quitting the job at Daily she’d held for five years after being berated by a white employee for her racial views. Ellis said she made “an off-color comment” at work that set off a white co-worker, who followed her through the store yelling at her that she is a racist and that all lives matter. “It was one of the most upsetting and traumatic experiences” she’d ever been through, she said.

Another time, Ellis said she was reprimanded for taping photos of black people who’d been killed by police around the store. A manager “was very worried it would offend y’all,” she told the mostly white crowd gathered around the demonstration.

Ellis said she was written up and suspended with pay while higher-ups decided how to handle the incident with the co-worker, who still works there. She said she was given the opportunity to quit, which she took because she had been planning to leave soon anyway.

“I miss the co-op every day, but I’m not going there until he is gone and we have some sort of public statement from the co-op committing to racial justice and food equity, specifically,” Ellis said.

“Don’t spend your money here,” said another speaker, Weatherly Knight. “Tell everyone you know, and tell them why.”

Ellis urged young people and people of color to run for local nonprofit boards. “We need a changing of the guard here in Athens,” she said. A successful boycott, though, might mean no Daily or Ciné board to run for. Like Ciné—which will likely have to close its doors if it can’t raise the money to buy the building—the co-op is at a crossroads where it must decide whether to expand and invest in a larger space. “Let’s nip this in the bud and get the expansion going,” Ellis said.

The issues raised at the demonstration could have political implications as well—two of the participants, Mariah Parker and Imani Scott-Blackwell, are running for county commission and school board, respectively.

When sought out for comment, employees and board members at Daily and Ciné have been wary of speaking about these issues. Daily’s board of directors provided this statement to Flagpole:

The Daily Groceries Co-op is committed to providing a discrimination-free workplace. Our goal is to embrace diversity by strategically working on racial and economic equity within the Athens community. We welcome an open and honest dialogue with the entire community on how Daily can become a model business for equity, social justice and equality. We recognize this goal as a constant journey rather than a destination. We undertake this journey as a democratically run group of over 1,400 owner-members, directors and staff members.

Among the 50 or so people who attended the demonstration were Matthew Epperson, Daily’s new general manager; Ciné Executive Director Pamela Kohn; and at least two Ciné board members, Dave Marr and Brian Carney. Invited by demonstrators to speak, Marr said they were only there to listen. “It hurts me to hear that people don’t feel welcome here or included here,” he said. “We don’t want that to be the case.”

On Saturday, the Ciné board released a longer statement saying that it will create a diversity advisory board dedicated to inclusivity in programming and personnel.

Just when a conversation Friday night started to get going, it ended on a sour note. Someone shouted out demanding an apology. But with the potential for litigation, Kohn shook her head, and Carney, a lawyer, could only offer, “I’m sorry, I can’t talk.”