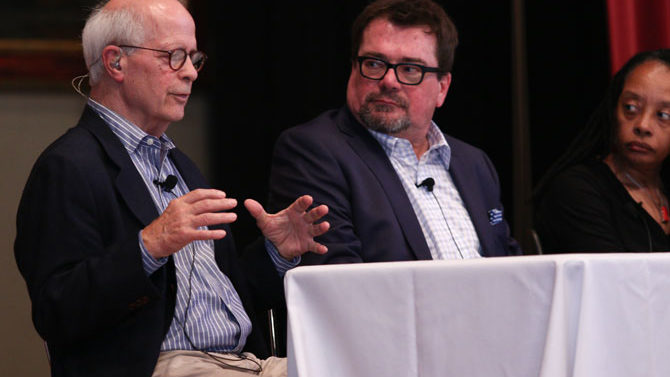 “Nobody else is as obsessed with themselves as we are,” New York Times Atlanta bureau chief Richard Fausset observed during a panel discussion last week, “Journalism in the Contemporary South,” sponsored by UGA’s Willson Center for Humanities and Arts.

And nobody is obsessed over as much as we are, either. Grady College professor Valerie Boyd said she has a friend in Brooklyn, NY who, when she tells people she’s from the South, “they look at her like she came in on the Underground Railroad. They don’t understand the contemporary South.”

And the contemporary South is a diverse South—urban and rural, Ozarks and Delta, with an increasing number of immigrants mixed in. “The South is not a homogenous region, and that’s something people who aren’t from the South don’t understand,” said Eliza Borné, editor of the Arkansas-based literary magazine Oxford American.

But that’s not why people find the South so fascinating. It’s the conflicts within our past that reverberate to this day. “Our nation’s most painful history [slavery] has its roots in the South, and obviously we’re still reckoning with that,” Borné said, in a sentiment echoed by other panelists.

The South has made progress, but the “Dukes of Hazzard” stereotypes remain. Perhaps more insidious than “some good ol’ boys” who “never mean you no harm” but happen to have a Confederate flag painted on their car is the vision of the South presented by Garden & Gun, a lifestyle magazine for affluent Southerners. It was the topic of an exchange between Boyd, who wondered why it didn’t feature more people of color sipping $12 cocktails, and Fausset, who insinuated that at least some of its subscribers didn’t want to see that.

So how does one tell the story of the contemporary South? For Fausset (a former Flagpole editor) and his national audience, it involves “helping people understand the South” and “exploding stereotypes” while also producing stories that “feel right” to Southerners.

For Scalawag, a North-Carolina based journal and website covering politics and the arts, it means “putting resources in the hands of communities” so they can tell their own stories for a larger audience, Managing Editor Alysia Nicole Harris said.

For Flagpole Editor and Publisher Pete McCommons, the answer is simple: Cover Athens. “Athens has all of the South here in town,” he said—the food, the music, a diverse population.

Then there’s The Bitter Southerner, a website dedicated to longform journalism from every Southern point of view. “Particularly along racial lines, we don’t understand each other,” Editor Chuck Reece said.

A mission statement is no good without the ability to keep the lights on, though. Flagpole’s revenue comes from old-fashioned ad sales, which, McCommons acknowledged, is a struggle and always has been. Scalawag, a nonprofit, is funded mostly by grants and subscriptions, and for years its editors worked for free in their spare time so writers and photographers could be paid. Subscriptions and ad sales pay for OA, also a nonprofit, although it’s also been branching out into memberships and events.

The Bitter Southerner might have the most unique model, although Reece said he wouldn’t recommend trying to replicate it. “I certainly never thought I’d work for a journalistic enterprise funded primarily by the sale of T-shirts and dish towels,” he said.

Grady College Dean Charles Davis also announced that Pete—can we dispense with the formality here?—will be the first recipient of the college’s Rollin M. “Pete” McCommons Award for Distinguished Community Journalism. Having known Pete since well before I came to work for him, he has devoted most of his life not only to informing Athens, but advocating for Athens and working to make the city a better place, which is the true spirit of community journalism. Community journalists like Pete are not some talking head in New York or D.C. We’re your friends and neighbors. Our kids go to school together. We’re a different breed, and one that may not survive as the news media continues to shrink and consolidate. Hopefully, Pete’s award will encourage Grady students to follow in his footsteps toward a rewarding (if not so lucrative) career as the “Colorbearer of _____.”

The inaugural award will be bestowed upon Pete Friday, Mar. 2.