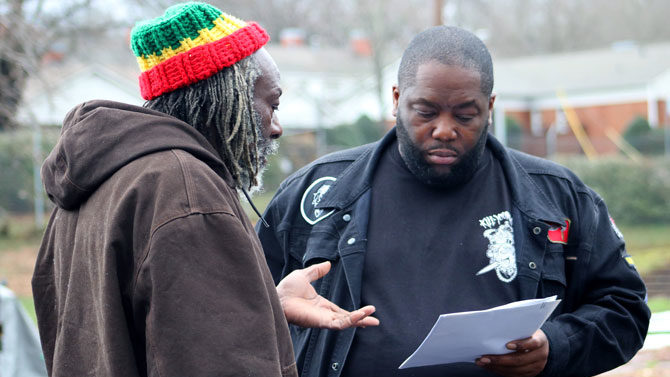 It was a blockbuster afternoon for the West Broad Market Garden. With a film crew and his Run the Jewels partner El-P in tow, rapper and activist Michael Render—better known as Killer Mike, though he asked not to be identified by his stage name because his mother doesn’t like it—spent more than an hour touring the Athens Land Trust’s community garden in the largely black West Broad neighborhood on Wednesday, Feb. 7, the day before Run the Jewels played a sold-out show at the Georgia Theatre. They also met with students in the land trust’s Young Urban Farmers program and walked down the street to garden matriarch Ethel “Ms. Ethel” Collins’ house for dinner.

Render and the crew wouldn’t say much about the project they’re working on, other than that it’ll be out “sometime this year,” and it involves Render spending three days trying to live totally within the black economy—food from black-owned restaurants, weed from black growers, etc.

“Other ethnic groups seem to do a better job keeping dollars in their economy, which in turn strengthens the community,” he said. “I think America is a better country when we [African Americans] as a community are a stronger community.”

Render even spent some time on a bench the night before because he couldn’t find a black-owned hotel in town. “That was a little too much dedication for the cause,” he said, sniffing his armpit as a joke. “I’m OK,” he concluded.

A scout told Render about the garden, and he said he had to check it out.

“One of the things that we have done traditionally well in our time here [in America] over the past 400 years is agriculture, and for the last 80–100 years or so, we’ve seen shrinkage in that area, specifically because of what Dr. [Martin Luther] King [Jr.] was talking about his last three years of life. The machine called America refused to subsidize black farming, refused to do some of the grants and things that were given to other farmers, land grants that he talked about in that famous speech,” he said, referencing a 1968 speech in Mississippi in which King talked about how the government gave whites land to farm, land grants for colleges, experts to teach them about farming and subsidies to buy equipment while telling blacks to lift themselves up by their bootstraps.

“Because of that, we’ve seen such a reduction not only in big black farms, but some of the smaller local stuff,” Render continued. “When I was growing up as a kid, people had gardens right in their backyard. People had chickens right in their backyard, and I lived in Atlanta, I lived in the West End neighborhood in Atlanta. Dr. King’s parents lived there. So, with the loss of that, we’ve lost greater independence as a community. We’ve lost a financial incentive that would’ve kept violence and poverty out of the community. This was an opportunity to come out and see a community that is restoring that, to talk to them about that.

“It’s also about food sustainability, from farm to table,” he said. “It’s also about how this isn’t just a black problem, it’s a class problem. Poor people don’t have access to good food.”

Render gave another shout-out to West Broad at the concert, as well as the Hot Corner, historically the center of African-American commerce in Athens, which dried up after integration.

In case anyone is curious, local artist Broderick Flanigan maintains a directory of black-owned Athens businesses at MOBAthens.com.

Meanwhile, the future of the West Broad garden remains uncertain. The Clarke County School District has plans to renovate the West Broad School—the long-vacant segregation-era black school where the garden sits—into administrative offices, which may or may not involve paving over the garden for employee parking.

Athens-Clarke County Commissioner Mike Hamby and neighborhood resident Ella Willingham, who are co-chairing a committee whose goal is to improve the neighborhood without pushing out residents through gentrification, are floating a plan to preserve the garden and the school. They recently asked the Clarke County school board to lease the school property to the land trust. ACC would provide $3.2 million in current SPLOST funding to restore the school “as a place for community learning” while preserving the garden. ACC would also consider building CCSD a new central office on county-owned land as part of the next round of SPLOST-funded projects (talks on which are scheduled to gear up in May).

While the commission hasn’t formally acted on Hamby’s proposal, it has “significant support,” he said, and he asked the school board to discuss it at their March retreat.