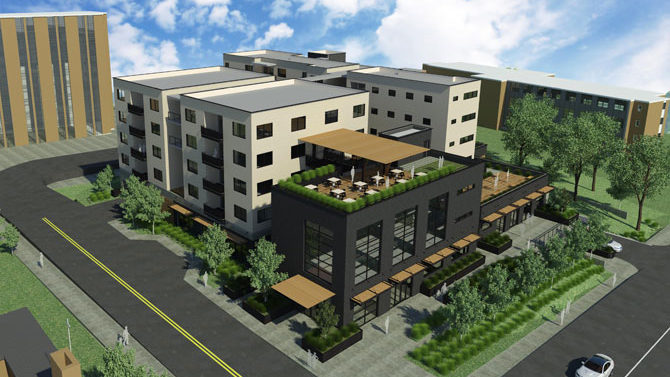 University of Georgia officials want to grant the Episcopal Diocese of Atlanta a license to use University Court instead of an easement. University Court is the street that snakes from Lumpkin to Cloverhurst, with parking lots on one side and the Oglethorpe House complex on the other. “That’s the sticking point,” said attorney Jim Warnes, who represented the diocese at last week’s ACC Planning Commission meeting, “the legal definition between an easement and a license.”

When the diocese submitted plans for the project last May, the university vehemently opposed it, with Police Chief Jimmy Williamson speaking against it because of potential traffic problems and student safety. Episcopal officials withdrew the plans, reworked them and sat down with UGA to resolve differences.

The reception last week was remarkably different. Planning commission member Alice Kinman spoke in favor of the redesign, saying changes make it suitable for the site. David Finkel also said he likes the new plans, as did Maxine Easom and Hank Joiner.

The new, improved plans for the property show a facility providing living space to 112 people—including a two-bedroom apartment for a priest and his or her partner—instead of 128, with 116 parking spaces instead of 133, and with two points of access, on University Court and Lumpkin Street. And it comes with a request for a land-use change, from Community Institutional to Main Street Business, and a zoning change, from Commercial Office to Commercial-Neighborhood, Planned Development.

In place of one large building are now four smaller ones, linked by bridges and set back 30 feet from the street. There are two levels of parking, one for residents and one for those who visit the facility’s retail enterprises or attend services in the Episcopal chapel, which will front Lumpkin Street.

Reached via Lumpkin, the parking lot for residents will be on the lowest level of the structure and will be gated. Warnes told the planning commission that because the facility is in a central part of campus—close to a dining hall, the Miller Learning Center and the stadium—he expects students to be walking or taking campus buses, not driving. He said the new design, redone by Studio BNA Architects, features “pods,” as the individual buildings are called, with two, three or four-bedroom options, with common dining and study areas. Those living in the buildings will be UGA students who want to be in a spiritual environment of like-minded individuals.

Speaking against the plan was Allison McCullick, UGA’s director of community relations. She said student safety is the university’s primary concern, and UGA officials are worried about the 47 parking places accessed by University Court. The university wants to grant the diocese a 50-year-long license to use University Court, which could be canceled if it’s breached. What would constitute a breach? If the diocese violates the terms of the license. But what are those terms?

When questioned by planning commission members, McCullick said the university doesn’t want a lot of cars coming in and out of University Court, on which many students walk and cycle. The diocese needs to assure university officials that this won’t be the case. Warnes said there’s more negotiating to be done.

“We know the problem, and we’re working on the answer,” said Ralph Edwards, who attended the meeting in support of the Episcopal Diocese. “The parking technology we need is out there.”