Commissioners Side With Developers Over Citizens on Mitchell Street Tower 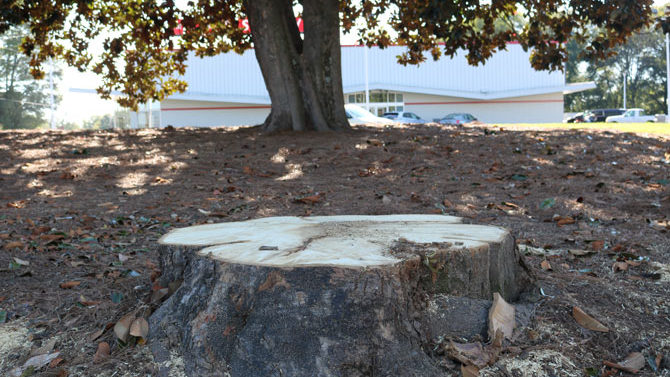 After listening to opponents of a proposed condominium tower near downtown for two hours, it was the commissioners’ turn to talk. Harry Sims started to lecture one speaker, Irami Osei-Frimpong, who had demanded that the developer hire black contractors and subcontractors, then noticed that Osei-Frimpong wasn’t in the room.

“They come in and say what they want to say, then they’re out the door,” Sims said. “They don’t get to hear the rest of the story.”

Just then, Osei-Frimpong burst through the door, walked up the aisle and sat down. Like many others, he had been outside in the hallway, watching the meeting on TV. It was a dramatic—and amusing—moment in a night full of drama. (Commission meetings are fun again, y’all! Some Jewish guy threatened to sue if the city removes the Confederate monument on Broad Street! Andy Herod told Melissa Link to move to Chattanooga!)

It was also another example of how defensive the commission can be. Like hairy dogs, they tend to hunker down when criticized. Some commissioners seemed not only to ignore their constituents on this issue, but to actively disdain them. They had received more than 100 emails against the 256-bedroom, 10-story Mitchell Street project and heard from dozens of speakers. When the public comment period was over, commissioners Allison Wright and Dickerson rattled off long lists of all the reasons why those speakers were wrong.

In an absurd twist, Dickerson and Mayor Nancy Denson even accused opponents of discriminating against wealthy retirees. “We’re vilifying people who’ve done well and been successful by saying we don’t want them in our community,” Dickerson said.

Of course, that’s not what anyone was saying at all. The point many speakers were trying to make was: Why should ACC do any favors for a developer who wants to build a development that will do little or nothing for the people of Athens?

Adam Lassila of the activist group Athens for Everyone called the development “a giveaway to those who already have enough” on behalf of its 1,075 members. “We want to be a community that meets the needs of all of our residents,” including the 38 percent in poverty, he said.

To build it, developers Carl Nichols and Steven Hill needed a rezoning from multifamily residential to the much denser commercial-downtown category. The rezoning will allow them to build more than six times as many bedrooms as the prior designation. “It’s basically a gift… of about $30 million to this developer,” Link said. “What are we getting in return?”

Not much. Nichols and Hill claimed that the development will provide office space for 100 tech workers and $700,000 in tax revenue. That’s all well and good, but is it enough for a gift that will make the developers millions?

What the development’s critics wanted was a place where ordinary Athenians could live, not one for wealthy out-of-town alumni who want to spend their twilight years reliving their glory days, or—as many suspect—more luxury student housing, or gameday condos that are occupied six weekends a year and empty or rented out on Airbnb the rest of the time. Sure, as the project’s Realtor, Stephanie Leathers, pointed out, there’s a lack of housing for seniors in Athens. There’s a lack of housing in and around downtown for anyone who doesn’t make six figures or have rich parents, unless you make so little you qualify to live in Bethel or public housing.

Commissioner Kelly Girtz tried to broker a deal where units would be set aside for middle-class retirees such as teachers and managed by the Athens Land Trust, an affordable housing nonprofit. “This is something dozens of cities have done, and we need to be talking about here,” Girtz said. The developers wouldn’t bite.

Commissioner Mike Hamby proposed setting aside 30 percent or more of the tax revenue the development would generate for ACC’s affordable housing trust fund (which is nearly empty after redeveloping Pauldoe into the Columbia Brookside mixed-income housing project). “Once and for all, we can quit talking about it and actually do something,” Hamby said. No one signed on.

As last year’s workforce housing study showed, there is a disconnect between housing prices in Athens and what most people can afford, especially in desirable areas like downtown and the surrounding neighborhoods. The one-year moratorium the commission declared on new downtown apartments earlier this year would have been a perfect opportunity to discuss options for encouraging more affordable housing—inclusionary zoning, density bonuses, tax credits, reduced parking requirements, smaller lot sizes, accessory dwellings.

It also would have been a perfect opportunity to discuss downtown’s design guidelines, which clearly aren’t working. “Everywhere I go, people talk about how much they hate these high-rise, boxy, bulky buildings,” Link said. “They absolutely hate them.”

Commissioner Andy Herod cast sprawl as the only alternative to the type of developments coming up downtown. He and Commissioner Diane Bell (correctly) noted that the 2000 comprehensive land use plan funneled development downtown for a reason—to curb suburban sprawl and efficiently provide services. “Our community is growing,” Herod said. “People are coming here. We have two choices: We can grow upward, or we can grow outward.”

That’s true, but growing upward doesn’t have to be so ugly, or so expensive.

But the rezoning was approved 7-3, with Dickerson, Sims, Wright, Bell, Herod, Hamby and Commissioner Jerry NeSmith in favor. (As a planning commissioner, NeSmith, incidentally, once called a nearly identical development proposal on the same property “too Paces Ferry.”) Link, Girtz and Commissioner Jared Bailey—who raised concerns about water and sewer capacity—voted against it.

Earlier that evening, the commission voted 6-4 to deny a rezoning for a bank at the corner of Epps Bridge Parkway and Timothy Road, partly to protect a small neighborhood of affordable single-family homes on residential Kirkwood Drive, and even after the bank’s CEO threatened to go across the county line to Oconee. Commissioners have been dealing with Epps Bridge parcel by parcel for years because its 1990s zoning remains residential, even as the rest of the corridor develops as commercial. Now, they’re finally going to create a master plan for the corridor, along with upcoming master plans for Atlanta Highway and Lexington Road (not the rinky-dink studies done on the cheap a few years ago, but real, honest-to-God master plans).

Commissioners also unanimously voted to send plans for a QuikTrip gas station off Oconee Street at the Loop back to the planning commission due to concerns about access and the development’s interaction with Firefly Trail. But they signaled their approval for the overall concept by voting to change the future land use map to pave the way for it.

ACTION Building Will Be Renovated

Ten years after the Athens-Clarke County Commission rejected a plan to tear down ACTION Inc.’s headquarters in a former school off Oconee Street and build townhouses, a developer has finally stepped in to renovate the historic property.

Planning commissioner Alice Kinman was on the commission in 2007 and voted against that rezoning, one of the most controversial in memory. “For all those years, I’ve looked at this property and said, ‘I hope I did the right thing,’” she said.

The 1908 building is the oldest schoolhouse left in Athens, planning commissioner and retired principal Maxine Easom noted. Developer Wesley DeFor is using state and federal tax credits for historic preservation to help finance the $2.2 million project. “We’re very excited about the project,” he said. “We love the history of it. We’re looking forward to maintaining that.”

Although they acknowledged the irony of tax credits subsidizing what architect Scott Haines acknowledged is likely to become student housing, planning commissioners by and large praised the project, which will preserve the main schoolhouse’s facade as well as a long-abandoned cafeteria behind it, converting them into apartments with a total of 38 bedrooms.

“I think everybody in the community agrees this building is definitely worth saving,” planning commissioner Hank Joiner said. “It is a challenge to restore this building to its former glory, and I admire anybody willing to take a crack at that.”

The planning commission only commented on the plans Sept. 7; it will vote on a formal recommendation next month, sending the project on to the county commission for a final vote in November.

The sale of the building cleared the last remaining debt for the once-financially troubled organization, which administers social-services programs, such as job training, housing counseling and emergency home repairs. ACTION is moving its main headquarters to Barrow County but will maintain an office in Athens, according to the Athens Banner-Herald.