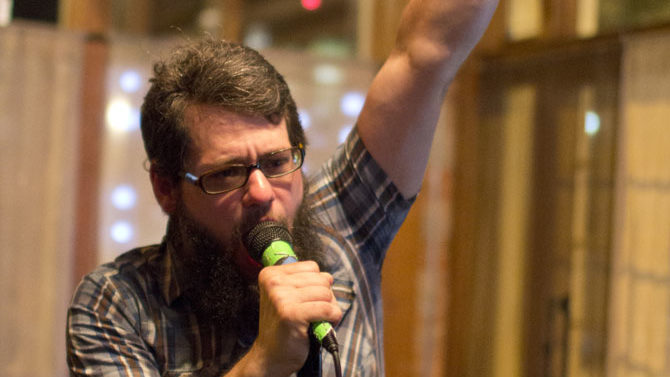 Mayor Nancy Denson is term-limited, but there will be a Denson on the ballot in 2018.

No, Madame Mayor’s 2014 opponent, Tim “No Relation” Denson, isn’t going to try again to nab that third-floor office in City Hall. But with a recently purchased home on Quailwood Drive, a countywide campaign behind him and another three years’ experience in political organizing with Athens for Everyone, he’s ready to run for Athens-Clarke County Commission—against District 5 incumbent Jared Bailey, who’s usually an ally, no less.

“It’s time for me to step up in an elected role and try to get some of these policies enacted that we’ve been talking about,” Denson said last week, including addressing affordable housing, child care, a living wage, a comprehensive civil-rights ordinance covering more than bars, and the racial disparity in marijuana arrests, he said.

Last week, Flagpole reported that Denson and Briana Bivens had stepped down from A4E, the organization that grew out of Denson’s mayoral campaign and pressures the Mayor and Commission from the left. Now we know why: Denson wants behind the rail, and Bivens—who worked on the successful effort to beat back Amendment 1, last year’s charter-school referendum—is his campaign manager.

Denson’s announcement will lengthen what’s already shaping up to be a stuffed 2018 ballot. Last year, none of the five commissioners who were up for re-election—Harry Sims, Allison Wright, Jerry NeSmith, Andy Herod and Mike Hamby—faced any opposition. Next year will be an entirely different story. Hilsman Middle School teacher and political newcomer Mark Martin is running for the District 2 seat Sims is leaving to run for mayor. Kelly Girtz is also leaving the commission to run for mayor, and school board member Ovita Thornton and PhD student and political activist Tommy Valentine are running in District 9. Lawyer and business owner Russell Edwards—best known for running against Rep. Paul Broun in 2010 and his anti-downtown Walmart crusade—is running against District 7 Commissioner Diane Bell. District 3 Commissioner Melissa Link and District 1 Commissioner Sharyn Dickerson are unopposed so far, but progressives have been scouting around for someone to challenge Dickerson.

Nothing against the more experienced folks, but it’s interesting to note that in Girtz, Link, Edwards, Martin, Valentine and Denson—all of whom are in their 30s or 40s—Athens has a chance to elect a whole new generation of progressive leadership.

One thing that ties them all together is their emphasis on transparency and engaging citizens. For example, Denson has long pushed for televising the commission’s monthly work sessions, where many decisions are made. He also pledged to hold monthly meetings in the district between agenda-setting meetings on the third Tuesday of the month and voting meetings on the first Tuesday of the following month to gather public input on agenda items. “I want to have a more engaged style of governing,” he said.

Of course, Bailey himself was elected as a progressive and remains one. He’s voted with Athens for Everyone’s position on almost every key issue over the past three years. As Flagpole’s former publisher, he’s been fighting the good fight for 30 years. But while Denson is quick to say that his campaign won’t be about Bailey (or anyone else who runs), “the commission can do better,” he said. (Bailey confirmed he plans to run for re-election but otherwise declined to comment.)

“Right now there is a complete lack of vision on our commission,” Denson said. “We’ve seen a combination of bad policy pushed through and good policy swept under the rug.

“It’s not enough to have commissioners who vote for good policies when they’re put in front of them,” he said. “We need commissioners researching policy, writing policy, going out into the community and getting it passed.”

• Our Daily Bread will be temporarily moving back to Oconee Street United Methodist Church on Sept. 9. The soup kitchen moved into First Baptist Church downtown after Oconee UMC caught fire in 2012, and decided to stay in the larger, more centrally located facility after it was rebuilt. But now First Baptist is undergoing renovations, which are expected to last until the end of the year.

• Plans have been submitted to renovate the ACTION Inc. building, also on Oconee Street, into a 38-bedroom apartment building. The developer is asking for a waiver from the county’s requirement that residential developments include first-floor commercial space, which was a sticking point when the ACC Commission rejected another development at that location 10 years ago. But that 2007 plan called for tearing down the historic 1908 building to make way for townhouses, whereas this one will preserve the former school’s exterior. The planning commission will get its first look at the plans Sept. 7, so check back next week for more.

• The knock on the ACC Department of Economic Development has always been that it focuses too much on the “big fish,” like Caterpillar, rather than fostering small, local businesses. To that end, the department has hired Michelle Nguyen as a business development specialist. “She will work with entrepreneurs and innovators in a role that was newly created as a response to feedback from the community regarding the latent opportunity to capitalize on entrepreneurship in Athens,” according to a news release. Nguyen has a BA in public policy from Duke and an MA in public administration from UGA, and previously worked as a special-events coordinator in Salisbury, NC, and in the ACC Human Resources Department.

• Since Pete was on vacation, it falls on me to report the sad news that former ACC Commissioner Tal Duvall died last week at 83. Duvall, who retired as statewide director of the UGA Cooperative Extension, was one of the original commissioners elected after city-county unification in 1991, and he also served on numerous other local boards and authorities. He is remembered as an open-minded straight shooter who could disagree without being disagreeable—a trait that’s in short supply these days.