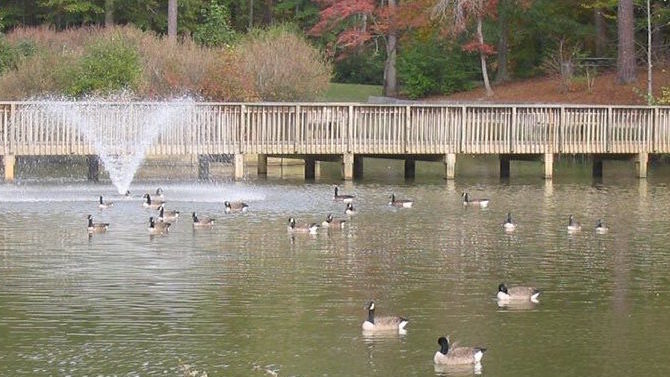 For 30 years, Memorial Park grew organically, with a playground here, a dog park there and a scattering of parking places. Built as a tuberculosis sanatorium, the building that houses the theatre was renovated in 2004, and the playground moved and expanded in 2009, but nothing significant has been done to improve the infrastructure since 1987. Now, county officials say, it’s time to look at the park as a whole and to determine which features people love, which ones they want improved and which, possibly, can be eliminated.

A dozen people—half of them employees of Athens Clarke County Leisure Services—attended a Monday night public visioning session. Another session will be held today at 6:30 p.m., and a second on Saturday, June 24 at 10 a.m., followed by an optional hike on the Birchmore Trail.

Like Bishop Park, Memorial Park has changed over the years—for instance, it used to have an area for skateboarding—and should continue to change, in the ways its users want. Leisure Services official aren’t sure what the public wants or how much those changes will cost, but they expect funding for improvements to come from a combination of SPLOST, grants and public/private partnerships, said county parks director Mel Cochran-Davis.

At Monday’s meeting, Cochran-Davis talked about some of the problems in Memorial Park. Session participants were asked to put colored stickers on different features of the park, with different colors indicating priorities—how much they like, say, the playground or the picnic shelter.

Memorial Park’s hilly topography leads to erosion, with storm water from neighboring streets washing mud, along with feces from the dog park, into the lake. Bear Hollow Zoo doesn’t meet today’s accessibility requirements, and there hasn’t been enough thought about how the animals are grouped. Cochran-Davis said there are vital security challenges for the animals as well. (Vandals broke into a cage and freed an owl last year, probably not realizing that none of the animals at Bear Hollow are capable of surviving in the wild.)

The zoo needs to be upgraded, said Daniel Sizemore, a parks planner. It could be expanded to include more educational opportunities. And the trails could be laid out so they meander and attendees could more easily circulate.

Egress and ingress at the park also have problems. The entrance doesn’t line up correctly with Marion Drive, but requires a slight jog to the right. School buses have gotten stuck entering and exiting the park. The one-way, circular drive leading out of the park is confusing, “and looks as though you are driving through someone’s back yard,” Cochran-Davis said. Visibility onto Gran Ellen Drive isn’t good either. And the circulation of both people and cars through the park is problematic.

Cochran-Davis wondered about the feasibility of building a two-story parking deck near the entrance, with green space on top and maybe a basketball court to hide the cars underneath.

“Memorial Park has a lot of good elements, but it’s a bit discombobulated,” she said. “We just need to see what people want.”