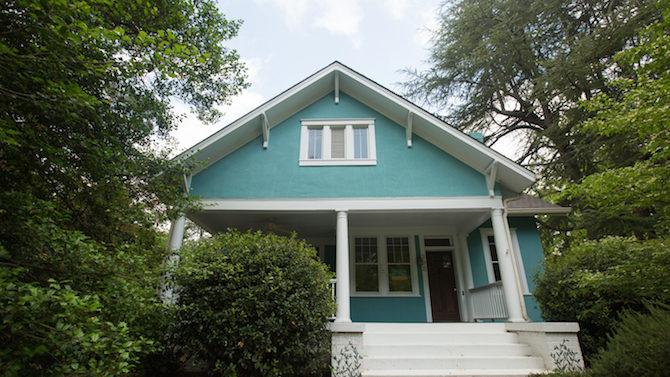 Five Points residents are enraged at their commissioner, Diane Bell, for “pulling the rug out from under,” as another commissioner put it, efforts to save a house on Milledge Circle from demolition and make the neighborhood a historic district at a time when residents are incensed at the recent trend of tearing down perfectly good houses to build McMansions in their place.

In March, Travis Elrod, who had purchased 398 Milledge Circle for $667,000 in February, applied to demolish the house, which was built in 1920 and is listed on the National Register of Historic Places, according to county records. It has been restored, but apparently unbeknownst to the sellers, James and Jennifer Hauver, the Elrod-DeVore family planned to tear it down anyway. (The same family built a 9,500 square-foot “monstrosity,” as one neighbor described it, on West Cloverhurst Avenue in 2012.)

As allowed by Athens-Clarke County’s demolition delay ordinance, Bell placed a 90-day hold on the permit, set to expire June 11. Neighbors have been using that time to plan for a development moratorium that they’d ask the ACC Commission to approve at their June 6 meeting to buy more time for a Milledge Circle historic district.

Residents held a meeting last week to discuss those plans. Bell did not attend. ACC Senior Planner Bruce Lonnee announced that Bell had removed the hold on 398 Milledge Circle’s demolition permit. This came as a shock to residents and even her fellow commissioners. “She has betrayed her constituents, and Athens has lost another historic house,” said Milledge Circle resident Claudio Saunt.

Bell did not return a call from Flagpole seeking comment Friday. Drew Dekle, a constituent and chairman of the ACC Historic Preservation Commission, said he has spoken to her once briefly, but she has otherwise been “completely unresponsive.” Nor had Bell informed fellow commissioners, including Mike Hamby, whose district is divided from Bell’s by Milledge Circle.

“I can also assure you that we are going to move forward with this new Milledge [Circle] Historic District and probably additional [Five Points] districts to follow,” Dekle wrote to Bell in an email copied to Flagpole. “If this demo is allowed, it will only further galvanize support. This IS what the majority of our neighbors want, despite some vocal developers and Realtors and a tiny and rapidly shrinking group of uninformed neighbors may profess.”

Half of the 40 or so homeowners on Milledge Circle have signed a petition in favor of a historic district, and Hamby, who has also been involved in the talks, urged supporters to keep going. The historic district is still “very much in play,” he said, and commissioners will “strongly consider it” if it’s brought forward.

There’s nothing anyone can do about 398 Milledge Circle at this point, though. “I’ve already looked into this, and once that’s done [removing the hold], the moratorium is no longer in play for this particular piece of property,” Hamby said.

Hamby, like many of Bell’s constituents, criticized the way she handled the situation. “Regardless of whether you think a historic district or a moratorium is a good idea or not, this is not good representation,” he said. “This is not the way to handle it, pulling the rug out from under people.

“Sometimes you have to work with people you don’t agree with,” he said. “It’s not just who you know or who you’re friends with. You represent everybody.”

It’s not the first time Bell has been in trouble with constituents over a demolition permit. Last year, she signed off on one for a Highland Avenue house so quickly that neighbors hadn’t even received notification yet. But placing a hold and then lifting it is even worse, Athens-Clarke Heritage Foundation Executive Director Amy Kissane said. “If that was her viewpoint, that’s the time to take that stand [when the application is submitted], not now,” she said.

Kissane confirmed that work on the historic district will move forward, but now that supporters know Bell can’t be relied upon, “until we can get the Mayor and Commission to vote on a moratorium, it’s open season” in District 7, she said.