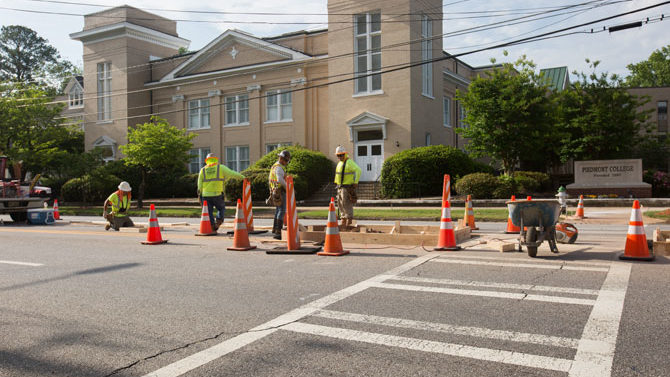 Praise hands emoji! Athens-Clarke County added two pedestrian refuge islands to Prince Avenue crosswalks last week, and similar improvements will be coming to other parts of the city within the next couple of months.

The Transportation and Public Works Department installed the islands at mid-block crosswalks at Pope Street and Piedmont College. They give pedestrians a place to pause safely after crossing two lanes of traffic before crossing the other two.

“They’re small, but they do provide some protection for the pedestrian,” TPW Traffic Engineer Steve Decker said.

In addition to the islands, TPW gave the crosswalks a fresh coat of paint and installed solar-powered rectangular rapid flash beacons similar to those at the Newton Street crosswalk on Prince. That crosswalk is scheduled to be moved to a safer location on the other side of Newton once the 100 Prince project at the former St. Joseph Catholic Church gets underway.

The islands will be similar to those TPW installed on Milledge Avenue near Clarke Central High School last year, except not in a turn lane (that stretch of Prince doesn’t have one). Instead, TPW restriped the lanes to leave a few feet in the middle for the islands.

Next, Decker said the department will move on to Cedar Shoals Drive, North Avenue and Baxter Street. Crosswalks with islands and RRFBs will be installed on Cedar Shoals at the Barrington Drive and East Paces Drive intersections, and on North Avenue near the Department of Labor building. (“That one really scares me,” Decker said.) He expects them to be completed by the end of May.

The projects are part of a slate of pedestrian and bike improvements the ACC commission approved in November. The $265,000 list also includes the Dougherty Street road diet and crosswalk beacons completed last year, as well as a pedestrian island and beacons on Lumpkin Street and Cedar Street, reprogramming traffic signals on Barnett Shoals and Gaines School Road, moving a Hawthorne Avenue bus stop to a safer location, reflective markings on Baxter Street and more visible red-brick crosswalks on Baxter and Oglethorpe Avenue.

Those projects came from a list compiled by TPW of the most dangerous stretches of local streets for pedestrians, based on crash data.