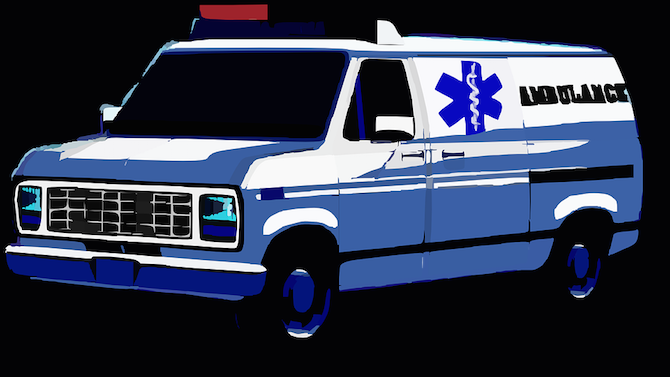 Public Enemy’s classic song about pokey ambulances could be coming true in Athens.

St. Mary’s and Athens Regional privatized ambulance service in 2009, contracting with Conyers-based National EMS. Two former National EMS EMTs, Bob Gadd and Sam Rafal, have been bringing up concerns about response times to the Mayor and Commission in recent months, prompting them to schedule a work session with the ambulance service. “For several years, we’ve been receiving complaints about response times and services from National,” Commissioner Jared Bailey said.

Chief Operating Officer Benny Atkins accused the former employees of sour grapes and pointed to high customer satisfaction marks. “The people complaining are not riding in our ambulances,” he said. But one survey that showed 97 percent satisfaction was conducted by National itself.

Atkins told commissioners Apr. 11 that the average response time is 7 minutes and 32 seconds—4 seconds slower than Rockdale County and faster than the 9 or so minutes in the metro Atlanta counties where National provides service. Anything over 12 minutes is cause for concern, Atkins said—which Gadd disputed, saying the standard used to be 15 minutes.

Bailey noted that ACC is the smallest county in Georgia. “It should be easier to get a quick response time than in, say, Atlanta,” he said. Commissioner Andy Herod asked for the median response time, which he said could be more accurate than the mean.

According to Atkins, eight to 12 ambulance crews are on duty at any given time: one at each of three Oconee County locations on the Oconee Connector and Macon Highway, and two at Clarke County locations on Old Epps Bridge and Gaines School roads, plus five that are moved around depending on need. (Calls tend to peak around midday and drop off at night.) “We’re very careful not to leave posts uncovered,” Atkins said.

Critics, though, have accused National of leaving posts uncovered to concentrate on more financially lucrative non-emergency runs. Atkins denied it. Only about a fifth of ambulance runs are non-emergency, he said, mostly transporting patients between hospitals or from hospitals to nursing homes. When emergency calls start pouring in, those runs are called off, he said.

The ACC Fire Department is training 100 firefighters as EMTs to help with the more serious calls, Fire Chief Jeff Scarbrough told commissioners. They responded to about 1,500–1,800 medical calls last year, he said. (National responded to 18,000.)

Although National is overseen by a committee made up of county, UGA and hospital officials, Gadd noted the “complete lack of transparency” in a letter to the Mayor and Commission, because all of the data comes from National itself. He suggested asking the ACC 911 center to compile the raw data itself and taking an anonymous survey of “street-level” police and firefighters.