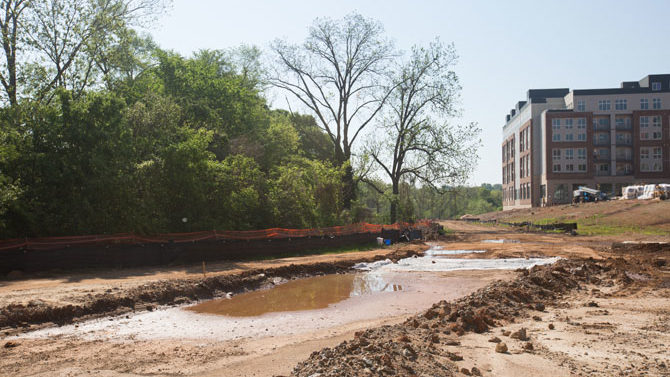 It’s been almost 20 years since CSX started tearing down trestles along the unused Georgia Railroad running roughly parallel to Oconee/Oak Street in East Athens, prompting worldwide outrage among R.E.M. fans clamoring to save the bridge made iconic and something of a tourist attraction by its appearance on the back cover of the band’s debut album, Murmur.

After then-Mayor Doc Eldridge halted the demolition, talk turned to what to do with Athens-Clarke County’s newly owned railbed. The answer was, turn it into a flat, easy-to-pedal-and-walk trail connecting downtown and Winterville. Years later, a private group popped up seeking to extend that trail from Winterville through Oglethorpe and Greene counties, and the whole effort came to be known as Firefly Trail, named for an early engine on the line from which sparks flew like lightning bugs.

Many readers probably know the background, but it bears repeating, given that it’s been more than 12 years since voters approved a sales-tax referendum to fund the rails-to-trails project. Then ACC received a federal grant, and waited, and waited, and waited for the feds to approve plans. A trailhead was built on East Broad Street in 2010, but construction is getting underway in earnest just in the past couple of months.

“It provides another way downtown without people necessarily getting into their cars,” Commissioner Andy Herod, who represents the Eastside, said at an Apr. 10 Federation of Neighborhoods meeting. The trail will bring safety, health and economic benefits, boosting property values and drawing businesses, as Atlanta has seen with the Beltline.

Plus, “trails are fun,” said Firefly Trail Inc. board member Mark Ralston. He was sold on the idea when retired ACC Environmental Coordinator Dick Field took him on the Silver Comet rail-trail, which runs from Smyrna to Alabama. “There was no worry, no fear of the overtaking car—’Whoa! What are they doing?’ It was so freeing,” he said.

The $12 million allocated so far will only pay to build the trail from East Broad to Old Winterville Road. That doesn’t include repairing or replacing the Murmur trestle. Instead, for now, cyclists will have to leave Firefly Trail and ride down and up switchbacks through Dudley Park.

Herod said an application has been submitted for $17 million to complete the trail to the county line. That funding would come from T-SPLOST, a 1 percent sales tax for transportation that will be on the ballot in November. A citizen committee is vetting those projects now, and commissioners will make a final list this summer. Competition will be stiff, with more than $200 million in projects under consideration and about $100 million in expected revenue over five years.

Winterville is already seeing bicycle and pedestrian tourism, Mayor Dodd Ferrelle said. “Every morning, we have cyclists,” he said. “We have people who come from Athens to walk with their children or grandchildren.” But he sees Firefly Trail doing for Winterville what the Silver Comet has done for towns along its 61-mile route, in addition to the safety benefits for residents of providing an off-street trail between the city’s two main intersections.

Farther down the future trail, Maxeys and Union Point are prepared to invest in “model miles” through those small towns, which Ralston thinks will convince other communities like Crawford and Arnoldsville to build their portions. “There are some pockets of opposition,” mainly based on unfounded concerns about privacy and crime, Ralston said. “That’s standard when you’re building a long trail.” Once people see it, though, they’ll realize “people aren’t coming bent on carrying away big-screen TVs from people’s houses while they’re on their bikes,” he said.

In Athens, Firefly Trail will become part of a network that one day will make it possible to get from Winterville or the Eastside to downtown and out to the State Botanical Garden or Ben Burton Park without ever setting a tire on a street. ACC will soon be extending the North Oconee River Greenway down to College Station Road, and that will tie into Firefly Trail at the park-and-ride lot on Oconee Street at the Loop. Future plans call for another greenway along the Middle Oconee, with paths through Boulevard and Normaltown connecting the two.

But if all that happens in the next 12 years, it’ll be a miracle.