Activists Discuss How to Trump-Proof Athens 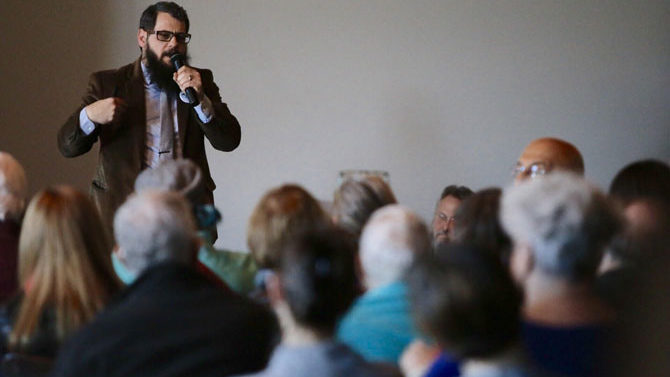 As Athens progressives slowly emerge from their mourning period and come to grips with the reality of four years of President Trump and all-Republican rule, thoughts are turning away from the failed mission of defeating him at the ballot box and toward obstructing his agenda on a local level.

Local activists shared their fears for what a Trump administration will mean for Athens’ vulnerable minority groups during a meeting Sunday, Nov. 20 that drew an estimated 500 people. It was part fired-up-ready-to-go rally, part Activism 101 and part infomercial for Athens for Everyone, the progressive group that organized it.

“During the election, there was a lot of hate speech, a lot of the old language we used to hear in the ’50s and ’60s in the South,” said Greg Wagstaff of the Athens Anti-Discrimination Movement (filling in for co-founder Mokah Jasmine Johnson). Athens’ racial problems run deeper than the ordinance the Athens-Clarke County Commission recently passed banning discrimination at bars, he said, and Trump could impede progress on issues like segregated housing, extreme poverty and police violence.

Beto Mendoza, an immigrants’ rights activist, is likewise pessimistic about what the Wall-Builder-in-Chief will do to undocumented immigrants. “It’s going to be harsh,” he said. “We’re going to see human rights violations.”

Evelyn, an Athens high-school student, described what President Obama’s Deferred Action for Childhood Arrivals program has meant for her. Trump “could take away deferred action and make us undocumented again—without work permits, without driver’s licenses and in fear of deportation,” she said.

April Greene, co-founder of the Magnolia Fund, an Athens-based group that helps women who are seeking abortions, said she’s “terrified” of the next four years, especially considering Vice President-elect Mike Pence’s anti-abortion rights record as governor of Indiana. Even if Roe v. Wade escapes intact, Greene said she expects further federal restrictions, such as a ban on abortions after 20 weeks and laws targeting clinics. “We’re already living in an incredibly hostile climate for abortion services,” she said. “Of course, I think that hostility is going to grow… We are going to see our right to access incredibly eroded over the next few years.”

Environmental activist Kate Blane worried that Trump would pull out of the Paris climate accords, approve the Keystone XL pipeline and roll back fuel-efficiency regulations for cars and trucks. “It’s pretty devastating for us who are working for a climate change solution,” she said.

Russell Edwards, chairman of the Clarke County Democratic Committee, sounded the most optimistic note, reminding the crowd that ACC voted against Amendment 1 (the state school takeover) by the largest margin in the state, and was the only county where a majority opposed Amendment 3 (doing away with an agency that investigations charges against judges). And Watkinsville elected a progressive, Dan Matthews, to the city council.

“This is a tremendous opportunity for folks to step up, throw their hat in the ring and run for office,” Edwards said. Mayor Nancy Denson’s term in office ends in 2018, and “it’s time for a mayor who represents the values of the people in this room,” he said.

“We deserve to have true progressive leadership in this community,” A4E President Tim Denson said. Beyond the mayor’s office, five commission seats will be up for grabs in 2018, along with four GOP-held seats in the state legislature and Republican U.S. Rep. Jody Hice.

Although the state House districts held by Reps. Regina Quick (R-Athens) and Chuck Williams (R-Watkinsville) were drawn to be safe for Republicans, Denson believes they can be flipped. Both went for Trump by just 800 votes, he said. And while Hice’s district is even more red, Denson noted that the fast-growing Atlanta suburb of Henry County, which is in the 10th, turned blue this election cycle.

No progressives ran for any of those seats this year. But even if it’s a long shot now, Denson contends that running candidates will help the movement in the long run. “When you run people, you’re building the infrastructure needed to win,” he said.

Of course, people have more options for activism besides running for office. A new A4E legislative action committee is meeting at 3 p.m. Dec. 3 to discussing pushing the ACC Commission to create a civil rights committee. In response to Trump’s rhetoric regarding sexual assault potentially emboldening rapists, A4E has also restarted a dormant sexual-assault prevention initiative, now led by Kate Dahlstrand. Its first meeting is Dec. 5. The group is also canvassing neighborhoods next month, looking for hosts for “resistance dinners” on Dec. 20 and planning a “day of resistance” on Inauguration Day, Jan. 20.

“We need to—and I’m pretty confident we can—have the biggest action in the history of Athens in opposition to Trump and Republican control,” said Adam Lasilla. That action could include UGA and high-school walkouts, and something else Lasilla wouldn’t reveal, except to say “we’ll have to have lawyers on hand for” it.