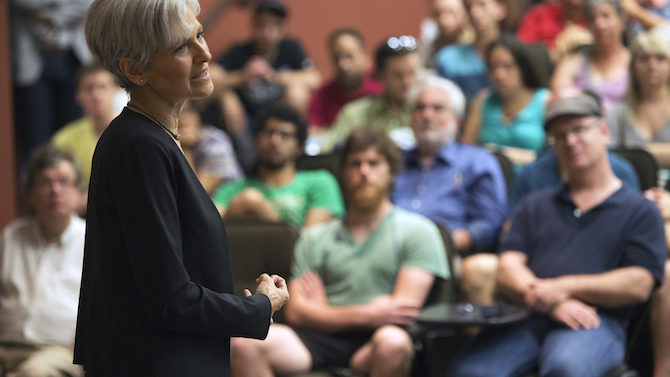 Stein, speaking to a crowd of about 300 at the Miller Learning Center for an hour, told students and graduates with student loans that they shouldn’t feel guilty about not being able to pay them back—the economy is still bad, and most of the jobs that have been created are part-time and low-wage, she said.

“They bailed out the [Wall Street] crooks who crashed the economy,” she said. “Isn’t it about time we bail out the young people who were victims of that waste, fraud and abuse?”

Everything else in Stein’s platform—correcting climate change, ending inequality and racism, and peace in the Middle East—is dependent on debt forgiveness, she said. It would free up recent graduates from having to work multiple jobs to pay off their loans, giving them time to engage in activism and to work on her “Green New Deal,” she said.

“This is essential if we are to survive as a society,” she said.

The Green New Deal would create 20 million jobs converting the nation’s power grid into an all-wind, solar and and hydroelectric system by 2030. She didn’t put a price tag on the program, but said costs would be covered by health-care savings.

Stein also proposed a “Medicare for all” single-payer, government-run health care system. In addition, she said reduction in pollution from the Green New Deal, investment in infrastructure for bikes and pedestrians and regulations on industrial food production would all make Americans healthier.

The Green New Deal would also stop conflicts over oil, she said. Her other anti-terrorism proposals included “persuad[ing] Turkey to close its borders to jihadist militias” and freezing the bank accounts of states that fund terrorism, such as Saudi Arabia.

In the end, though, Stein believes the greatest threat is climate change. Citing a recent National Oceanic and Atmospheric Administration report for the insurance industry, she predicted that sea levels could rise 9 feet by 2050, flooding coastal cities and creating hundreds of millions of refugees. She called the threat greater than the one posed by World War II: “We’re not talking about one harbor [Pearl Harbor]. We’re talking about all harbors.”

Stein’s platform is in many ways to the left even of Sanders, the socialist senator from Vermont who unsuccessfully challenged Hillary Clinton for the Democratic nomination, winning support from millions of millennials in the process.

Stein accused Democrats of “sabotaging” Sanders’ campaign. “They used Super Tuesday and this superdelegate thing to make sure the grassroots could not win the day,” she said. “There are things the party did to suppress the revolution.”

And she discouraged Sanders supporters from trying to change the party from within. Left-wing candidates like Jesse Jackson, Dennis Kucinich and Al Sharpton tried that, and they were “sabotaged” as well, she said.

She urged progressives to vote for what they believe in, rather than voting out of fear. “People ask me, ‘Aren’t you afraid of Donald Trump?’” she said. “I say, ‘Well, no, I’m really afraid of climate change, thank you very much.’”

Clinton and other centrist Democrats aren’t strong enough on environmental issues—for example, Clinton supports fracking, Stein said. She also laid responsibility for Trump’s rise at President Bill Clinton’s feet. His support for free-trade agreements led to the economic anxiety that led voters to Trump, she said. (Hillary Clinton supported the Trans-Pacific Partnership as secretary of state but now opposes it.)

Stein had harsh words for President Barack Obama, too, calling him “the deporter in chief” for deporting more undocumented immigrants than every other presidential administration combined. Stein said she would welcome immigrants.

Stein’s campaign is working to collect 7,500 signatures (reduced from 54,000 by a recent court ruling) by July 12 to get on the ballot in Georgia.

Stein was introduced by Athens-Clarke County Commissioner Melissa Link, a staunch Sanders supporter. “You don’t have the choice of the lesser of two evils. This is still a democracy, dammit,” Link said. “Vote with your hearts, voter with your soul and change the system by challenging it.”

Stein is currently polling at about 6 percent, although third-party candidates tend to fade as Election Day approaches. But she told the audience that they are more powerful than the know—if all 43 million Americans who owe student debt voted for, she’d win a plurality and be president, she said.

It remains to be seen how many former Sanders supporters Stein can attract, though. One local Sanders organizer, Jeff Hannan, estimated perhaps 10 percent; many are planning on writing in Sanders’ name as a protest, he said.