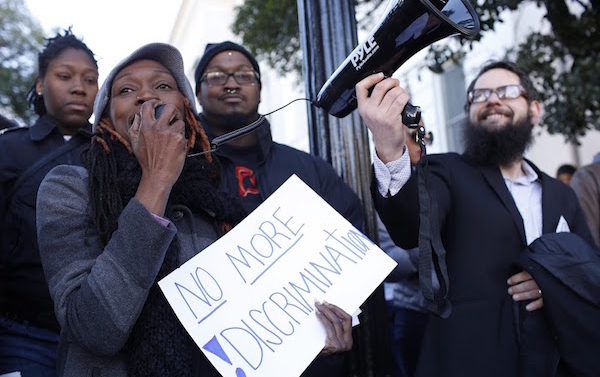 Eight months after a racist drink name at a Confederate-themed downtown bar sparked widespread outrage locally and nationwide, an anti-discrimination ordinance is finally about to appear. Without going into detail, Mayor Nancy Denson said at the Athens-Clarke County Commission’s June 21 agenda-setting meeting that county Attorney Bill Berryman “has come up with some suggestions.” She assigned the issue to the commission’s Government Operations Committee, which next meets on Thursday, July 21, and instructed the committee to bring forward a recommendation for a Sept. 6 vote.

Flagpole has not yet obtained a copy of the proposed ordinance. “I know in very general terms [Berryman] was looking at requirements for any bar that might post a dress code,” said Kelly Girtz, one of the commissioners who started pushing for the ordinance back in December. “Another area was a formal complaint process that the police would be involved in, where people could file a complaint about a downtown business.”

The ordinance would address reports by black UGA students (and their white friends) that came to light last fall that many downtown student bars ban fashions popular among African Americans, then selectively apply those dress codes, as well as the broader perception among people of color that downtown is unwelcoming.

The federal Civil Rights Act already outlaws discrimination by “public accommodations,” but to enforce it, victims or the Department of Justice generally must file a lawsuit. A local ordinance would create a much easier path to resolving instances of discrimination.

Greenways: ACC also continues to make slow progress on the East Athens rails-to-trails project and a $6.3 million extension of the North Oconee River Greenway. At its July 5 meeting, the commission is set to approve concept plans for a segment of the Greenway roughly from the Loop to the Research Drive-College Station Road intersection, with spurs connecting it to Barnett Shoals Road and student housing off Bailey Street. (Plans to extend the Greenway from Carr’s Hill just south of downtown to the Loop have already been approved.)

In addition, through the Athens Land Trust, landowners have agreed to provide ACC with easements along the Firefly Trail (16 years in the making and counting) that will follow the old Georgia Railroad from Dudley Park out to Winterville, tying in with the greenway at the Lexington Road park-and-ride lot.