Why You Should Support 100 Prince, the Development at St. Joe 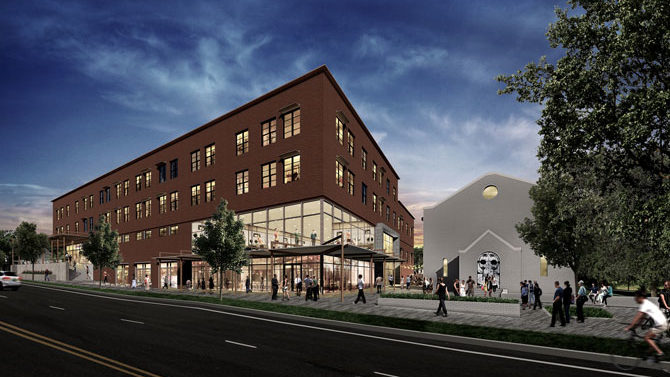 Russ Davis and Greenville, SC-based Homes Urban will be back before the Athens-Clarke County Planning Commission this Thursday, Apr. 7, seeking approval to redevelop St. Joseph Catholic Church, which has (mostly) moved out to Epps Bridge Road.

You can view the plans for yourself at the public-relations masterpiece that is 100princeathens.com, but here are a few reasons to support the project formerly known as the Village at Prince:

• It’s the type of development we say we want: True mixed use with a small grocery store (rumored to be the Daily, which is looking for a larger space) and other small retail spaces. Architecturally, it’ll blend in with the Bottleworks across the street and provide a nice transition from downtown to the Prince Avenue corridor.

• It preserves the historic church sanctuary as a restaurant.

• It’s not maxed out. The plans include 126 one- and two-bedroom apartments in three- and four-story buildings. A developer who wanted to play hardball could’ve applied for a rezone to commercial-downtown and put up a seven-story building with 900 student apartments—and if they didn’t get it, they’d have a pretty good case if they sued. Or it could be a monolithic medical office like those on West Broad Street. The Selig situation—where the community fought a development only to see something that incorporated even fewer of their ideas take its place—is instructive here.

• The developer has committed to requiring lease-holders to be 21 and up. The layout of the apartments isn’t geared toward the luxury student market, and it lacks the infinity pools and lazy rivers and golf simulators and such that kids want.

• Some portion of the units will be set aside as affordable.

• The development will include a pedestrian plaza, bike racks and a bus stop, and the developer is advocating for a Complete Streets policy on Prince Avenue.

• The developer worked with the neighborhoods, and opposing it after he listened to our input would discourage future developers from doing the same.

Of course, there are still issues: Some people feel the “townhouses” (really small apartment buildings) on Childs Street don’t blend in with the neighborhood. Davis could go back on his word regarding affordable units or leasing to students, or sell the development to someone who will discard those promises (but that’s a chance I think we have to take). The development will bring traffic, although a little more congestion on Prince isn’t necessarily a bad thing, especially if you’re on foot or a bike.

No development is ever going to be perfect. But this is apt to be as good as we’re ever going to get. It’ll make Athens denser in a good way—more like a real city—so that we can improve transit and lure more amenities to the downtown area, but without drastically changing downtown’s character the way some other downtown developments have done. It’s the type of development we need and deserve.

More Fun Times: Also Thursday, the Clarke County Board of Education, spurred on by the Cedar Shoals High School sexual assault controversy, will host a public forum on school discipline from 6–8 p.m. in the cafeteria at the Athens Community Career Academy. The forum will be in a roundtable format moderated by Joe Whorton, a retired UGA Fanning Institute faculty member. Participants are urged to familiarize themselves with discipline policies (available at clarke.k12.ga.us/codeofconduct) and to RSVP at clarke.k12.ga.us/BoardRSVP so officials know how much seating to provide. Child care will be provided.

Charter District: Last week, the Clarke County School District heard the good news that its charter-district application was approved by the state school board. CCSD will retain control of the career academy, which was the main issue holding up the application.

To recap, a charter district isn’t the same thing as a charter school (a school run with tax dollars by a nonprofit or for-profit entity). By becoming a charter district, CCSD will gain about $1 million in additional funding, as well as flexibility regarding some state regulations, as long as it follows a plan laid out in the application. The biggest change that parents will notice is that many school-level decisions will now be made by school governance teams made up of principals, parents, teachers, police officers and other community members.

Your Tax Dollars at Work: Last week, some jerk working on a construction project downtown poured a bunch of a cement- or grout-like substance into the sewer. It hardened up, forcing Athens-Clarke County workers to dig up 150 feet of sewer line in the middle of Broad Street. It’s been patched up temporarily, but workers will likely be out there again this week fixing the line permanently, as well as looking for clues as to who might have done this. Hug a Public Utilities worker if you see one, because he’s likely been standing knee-deep in sewage at some point.

So Much for Transparency: One bill we left out in our wrap-up of the General Assembly session last week gives the UGA Athletic Association an exemption from the state’s open-records law. Rather than having three days to respond to open-records requests, college athletic associations in Georgia could take up to 90 days. Supporters said the bill will help athletic associations deal with a high volume of requests and limit rival teams’ access to recruiting information. But it would also shield important records about spending and construction projects (like UGA’s new indoor practice field) from the public.