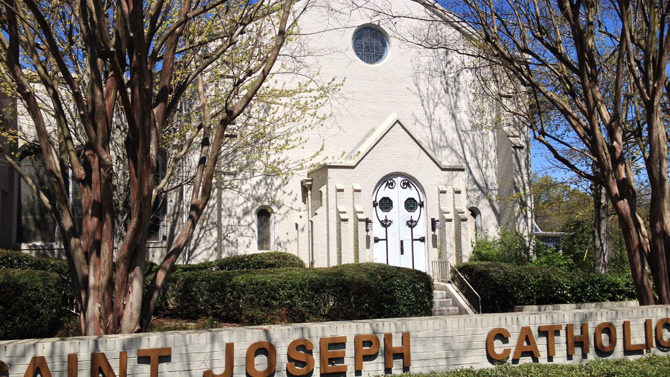 What, you didn’t think it was just going to sail through, did you? This is Athens.

Greenville, SC-based Homes Urban’s plans for a mixed-use development at the former St. Joseph Catholic Church at Prince Avenue and Pulaski Street—the church has mostly completed its move to Epps Bridge Parkway—drew rave reviews prior to being submitted last month, and still enjoy strong support from intown neighborhood groups. But adjacent homeowners are now raising concerns about the development.

Homes Urban owner Russ Davis, who is seeking a rezoning, formally presented the plans to the Athens-Clarke County Planning Commission on Thursday, Nov. 5. They include a small grocery store and other retail space and apartments fronting Prince, another large apartment building with a parking deck behind it and six smaller apartment buildings near Childs Street, for a total of 146 one- and two-bedroom units. The historic chapel on the property will be converted into a restaurant.

“I think this is a very exciting proposal,” Cobbham resident Clint McCrory told the planning commission. “It’s very appropriate for this location.” The Boulevard Neighborhood Association also supports it. (Correction: Eric Vaughn, not McCrory, is president of the Historic Cobbham Foundation.)

Not everyone in Boulevard is fully supportive, though—including influential activist Tony Eubanks, the driving force behind efforts to remold Prince Avenue as a complete street for 14 years. “I’m very nervous about this plan,” he said. “I understand people have a lot of reservations about this plan.” In particular, he said, he wants to know how the developer plans to deal with traffic and moving people around without cars.

Pulaski Heights residents who live immediately adjacent to the property and will be most affected by it are wary, too. “I’ve lived here for 19 years now and seen all manner of bad development try to come into our neighborhood,” Lauren O’Grady said.

The apartment buildings accessible from Childs Street are out of scale with the modest homes nearby and could dump traffic onto residential streets, critics said. A trash compactor on the property is another concern. So is shade. One nearby homeowner used observations of the sun to calculate that a 51-foot-tall apartment building backing up to Pulaski Heights would blot out the sun for more than two months a year, according to Pulaski Heights resident Angela Steedley.

The meeting Thursday was merely an initial hearing, and planning commissioners told Davis they need to see more detail—including elevations and a traffic study—before making a decision.

Davis also said that the apartments will be marketed to professionals rather than students, pointing out that there has been little to no non-student-oriented rental development in Athens. He has said he will go so far as to bar anyone under 21 from signing a lease, and he won’t accept parents as co-signers. Pulaski residents, though, raised the question of what will happen if Davis is wrong about the market, and he can’t fill up the development with grownups? Other intown developments—Georgia Heights and the condos near the tracks on College Avenue come to mind—were originally built for young professionals but filled up with students anyway.

Another selling point for a community where housing costs are quickly spiraling out of reach for many working people is that Davis said he will set aside “some portion” of units that will be affordable for those making 80 percent of the local median income (about $27,000 a year). But how many? And what will the market-rate units rent for?

There is no timetable for Davis to bring back answers to these questions and more detailed plans, but planners said the earliest we’re likely to see them is January.

Food Trucks: Thank God, you will soon be able to buy a hamburger out of a truck window in downtown Athens and plop down on a curb to eat it while listening to the sweet sounds of a gas-powered generator.

The ACC Commission passed a compromise food-truck ordinance on Tuesday, Nov. 3 meant to assuage restaurant owners’ concerns about unfair competition. The ordinance raises the fees food trucks will pay to park around City Hall by several hundred dollars (more if they’re from out of town). It also moves several first-come, first-serve spots from Washington Street to Hancock Avenue—where they’ll be farther away from brick-and-mortar competitors—in addition to College Avenue. Hours will remain the same: 7:30 a.m. on Thursdays to 2:30 a.m. Fridays. In a further effort to appease opposition, the ordinance will sunset in one year and will have to be re-approved.

About 30 angry restaurant owners met last month with the commission’s Government Operations Committee, which had been working on the ordinance since March. It should be noted, however, that only one restaurant owner—Last Resort’s Jaamy Zarnegar—spoke about food trucks Tuesday, and he supports them.

Commish Dish: The commission did lots of other stuff Tuesday, too, including:

• approving, after much parliamentary weirdness that inspired a GIF-y blog post, a 20-year water and sewer plan that precludes any possibility of sewer lines in the environmentally sensitive Sandy Creek and Lower Shoal Creek basins.

• approving plans for the long-shuttered Southern Mill off Chase Street, which will be converted into lofts and retail space. In related news, the state has approved an Opportunity Zone around the project, which will give businesses tax breaks for creating jobs there and could spur more development in the Bryan/Miles/Oneta Street area.

Living Wage: Athens-Clarke County set a policy under Mayor Heidi Davison that all full-time ACC employees are paid a “living wage” of at least $10.50 an hour. Athens for Everyone, the progressive group that grew out of Tim Denson’s 2014 mayoral campaign, is pushing ACC officials to extend that policy to part-time and seasonal workers as well. While only 11 employees would be affected, it’d also be inexpensive to implement: less than $38,000 a year, according to A4E. A petition is up at athensforeveryone.com.

Commissioners Andy Herod, Melissa Link and Kelly Girtz said they support the effort. “I think it’s a very important thing for us to set an example,” Herod said.