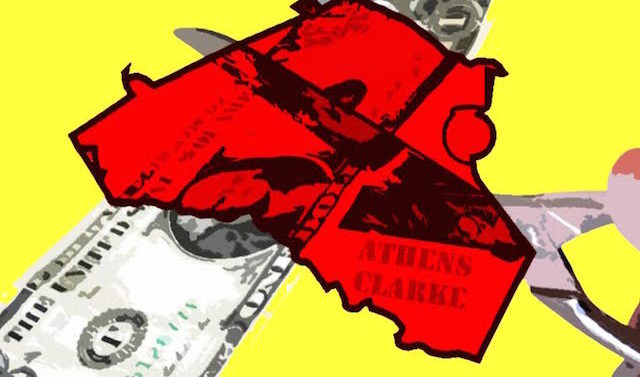 After years of cuts, Athens-Clarke County is once again, if not flush with cash, at least not searching in between the couch cushions to make a Taco Stand run. ACC’s proposed 2016 budget is about $4 million higher than last year’s, which is enough to chip away at a long list of wants and needs that have piled up since 2008, but not nearly enough to do everything. And sometimes deciding what to give more money to is just as tough as deciding what to cut.

After Mayor Nancy Denson released her proposed budget late last month, ACC commissioners found themselves with an extra $600,000 to play with because tax revenue projections are a bit more optimistic now than they were a few months ago, when officials started working on the budget. Here’s what they’ve decided to spend the money on:

• $150,000 for an additional 0.25 percent raise for county employees, on top of the 2 percent Denson already proposed.

• $42,500 to hire an outside consultant to look at the structure of the Leisure Services Department. (Some commissioners want to split it into separate athletics/recreation, arts and nature departments.)

• $6,000 for the Athens Area Arts Council and $1,500 for the Oconee Rivers Greenway Commission to cover administrative costs.

• $65,000 for tuition assistance for county employees who want to go back to school.

• $60,000 to replace a Planning Department position that was cut in 2010. (The department has a backlog of several years’ worth of special projects.) 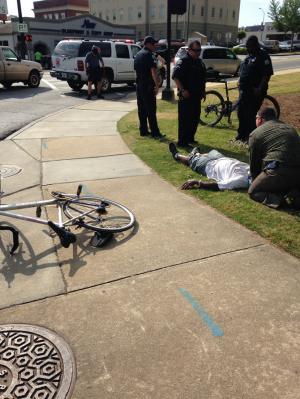 A cyclist was clipped by a car at the intersection of Prince Avenue and Pulaski Street last week. Police on the scene said his injuries did not appear life-threatening.

What remains on the cutting-room floor is funding to support a fourth Superior Court judge that was approved by the legislature during the last session and is expected to be appointed by Gov. Nathan Deal in April. The Clarke County Courthouse is already overcrowded, which has left court officials wondering where they’re going to stash this guy.

“We’ve got judges in Magistrate Court who are working in closets,” Chief Judge David Sweat told commissioners at a May 14 work session. It’s a safety issue because accused criminals, courthouse staff and the public are in too-close proximity, he said.

Currently, several non-criminal-justice-related offices are housed in the courthouse, including tax assessors, tax commissioner staff, IT workers and part of Central Services, a sort of catch-all department. They could be moved, but where?

One option would be the Costa Building, the vacant yellow building just down Washington Street from City Hall where the downtown police precinct used to be. Commissioners allocated $3.6 million in SPLOST money to renovate it in 2010, but pushed the funding out to the end of the current eight- or nine-year SPLOST against Reddish’s advice, which prompted an “I told you so” from the manager.

“We will try to get the Costa Building wrapped up, finished for you by the time we get the fourth judge,” Commissioner Harry Sims said.

The commission will approve the budget June 2—with Sunday bus service intact.

Historic District: Commissioner Mike Hamby exercised his power to temporarily halt the demolition of a West Rutherford Street house, and is pushing his colleagues to pass a six-month moratorium June 2 on tearing down houses in the area because residents want to explore a historic district.

The one-story brick house in question dates back to 1935, and while it’s not any kind of architectural landmark, it’s exactly the type of modest (by Five Points standards) home that has been falling like a Georgia fan’s championship hopes to make way for (for lack of a better term) McMansions. Meanwhile, neighbors and planners alike are skeptical of Jared York’s proposed 14-unit subdivision for seniors on three acres at the corner of Springdale and Rocksprings, which is scheduled to come back to the ACC Planning Commission in July.

Just like Prince Avenue, various studies on infill housing—at least one specific to Five Points—have been lying around for years. Perhaps it’s time to dust them off and start taking a holistic look at what is perpetually one of the hottest real estate markets in Athens.

What the Cluck?: Mayor Nancy Denson refused to sign an ordinance the commission passed May 5 legalizing backyard chickens. That’s not a surprise—she was staunchly opposed all along—but the ordinance took effect May 20 anyway, so go whole hog on those hens.

Tuition Plan: The Board of Regents hiked tuition at the University of Georgia 9 percent (again) for this coming school year, but hey, at least you can pay in installments without taking out a title loan. The board voted last week to extend a payment plan pilot project at Georgia Tech to all public colleges and universities. Under the plan, half of tuition—about $2,500—is due at the beginning of the semester, with a quarter due after the fourth week of classes and the rest at mid-term. About 1,400 students paid in installments at Georgia Tech, according to the BOR.

CopsList: The University of Georgia Police Department has set up an “e-commerce safety zone” in the parking lot of its headquarters in the Hodgson Oil building on Oconee Street for people to complete online transactions. “It is clearly marked, well lit and has video surveillance,” according to police, so hopefully that will be a deterrent to the next Craigslist Killer. Now you know, and knowing is half the battle.