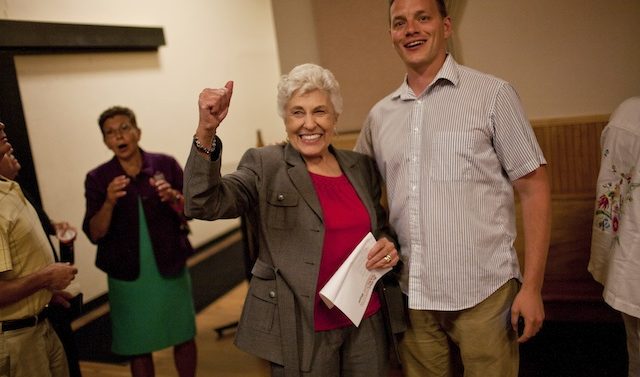 I think we can all agree that 2014 was a pretty crappy year. Maybe 2015 will be different. While last year will be remembered locally as The Year Nothing Happened in Athens Politics—actually, it probably won’t be remembered at all—some wheels were set in motion that could lead to, well, things actually happening in 2015. Here’s a sneak preview.

New Leadership: Mayor Nancy Denson will be sworn in for her second term Tuesday, Jan. 6, as will three new commissioners. The commission is losing its lone (relatively) conservative voice in Doug Lowry, who was ousted by the more progressive Sharyn Dickerson in the May election. The African American community also is losing a voice in George Maxwell, who is being replaced by Melissa Link. Whether the outspoken Link can be effective after most of the commission supported her opponent will be one of the most interesting story lines in the coming year, although it’s clear she’ll at least keep the heat on the mayor and commission to address some of the pressing issues they’ve been dodging. It also remains to be seen how Diane Bell, who’s replacing Kathy Hoard, will fit into the equation—she ran unopposed, so not much is known about her views.

New Development: It’s always a big issue, and 2015 will be no different. Landmark Properties will soon break ground on another student apartment complex at the former Armstrong & Dobbs property off Oconee Street. Another student apartment building will be coming up at Lumpkin and Dougherty streets, and at Lumpkin and Broad, Georgia Heights, a mixed-use building aimed at young professionals, is nearing completion. The Athens Downtown Development Authority is accepting proposals for an office building on a city-owned parking lot near Hotel Indigo in an effort to diversify the mix of uses downtown. Meanwhile, the downtown master plan is gathering dust, as Denson has yet to appoint a promised implementation committee six months after Jack Crowley formally submitted the plan.

Growth isn’t limited downtown, though. Prince Avenue is booming, as well. A big new medical office building in Normaltown, where Allen’s used to be, could happen this year, and the Atlanta Catholic archdiocese is quietly listening to pitches for the St. Joseph’s property, although the church’s new sanctuary off Epps Bridge Road won’t be ready for some time.

Getting Around: Speaking of Prince Avenue, a Georgia Department of Transportation safety audit of the corridor could be released any day now. A draft report that’s been circulating for a few weeks is encouraging. It recommends installing traffic-calming medians and pedestrian islands; bump-outs at crosswalks to improve visibility; bike lanes; additional sidewalks; improved lighting; closing excessive driveways; and a road diet along part or all of the corridor—all things neighborhood residents have been advocating for more than a decade. Not all of these things are cheap, though, and some will take several years.

How will we pay for them? Maybe with money raised by the state. A joint House and Senate study committee report released late last month says the state needs $1 billion–$1.5 billion in new transportation funding and recommends, among other things, raising gas taxes to pay for much-needed projects. While most of that money will undoubtably be earmarked for metro Atlanta, surely GDOT could spare a couple million for little old Prince Avenue. (That’s assuming, though, that Republicans summon the political will to buck the tea party and do what needs to be done.)

The report even gives at least a passing nod to mass transit, as the state’s business and Republican leadership are increasingly recognizing that millennials don’t like driving and want to live and work where they don’t need a car. This new attitude dovetails nicely with an upcoming Athens-Clarke County study of the city’s various transit systems, including Athens Transit and University of Georgia buses, and how they might function more efficiently and effectively. If T-SPLOST had passed in 2012, ACC would have gotten money to run buses at least every half-hour on every Athens Transit route, and if the legislature succeeds in boosting transportation funding this year, that should be the second thing we ask for.

The third thing should be funding for Crowley’s choo-choo through campus—UGA is accepting its last shipment of coal this month before switching to an electrode boiler. The fourth thing should be money to fix up Atlanta Highway, which is a hot mess. Thanks to Commissioner Mike Hamby’s committee, we know what to do—an access road connecting parking lots would be a great start—we just can’t afford it.

And how about a Brain Train while we’re at it? OK, that’s probably taking things too far. But while we’re in la-la land here, how about a cool streetcar like the one that just opened in Atlanta? Streetcars used to run down Boulevard, Lumpkin and Milledge Avenue, powered by a hydroelectric plant on the Middle Oconee River. (You can still see the ruins at Ben Burton Park.) But bus and tire manufacturers and oil companies bought up streetcar systems, which were mostly privately run at the time, and shut them down. Now they’re making a comeback.

Frye Graduates: A belated congratulations to state Rep. Spencer Frye, who earned a psychology degree from UGA last month at the age of 46, 26 years after he dropped out to do mission work in Haiti. He’s had a successful career as an entrepreneur and head of Athens Area Habitat for Humanity, but decided to return to school two years ago to set an example for his kids.