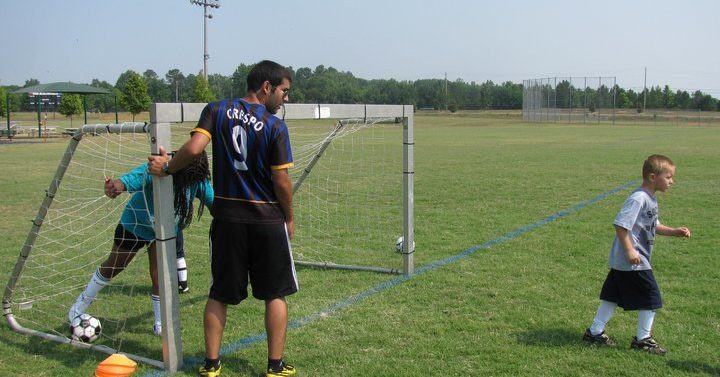 Bishop Park is popular. But like the jock who just wants to dance, man, it’s having an identity crisis.

UGA College of Environment and Design students took input from 1,200 people, both online and in person, for a master plan for Bishop Park. What they found is a somewhat schizophrenic group of patrons—”overwhelmingly” women who drive to the park, with a smaller set of people who live within one mile and walk or bike. Some go for “passive” activities like taking a walk or shopping at the farmers’ market; others for “active” things like organized softball or gymnastics. “We knew we were looking at two groups of people,” Pratt Cassity, director of public service and outreach for the CED, said at a recent public forum.

The data shows that Bishop Park “lacks a unified identity,” Cassity said. “We really thought about the process of branding and giving the park an identity,” he said.

So… what should that identity be? The CED team prepared three options. The “passive” option, focusing on individuals and small groups, would include new trails on the park’s southern end, swings and hammocks for adults, a labyrinth garden and additional greenspace. The “active” option, focusing on team sports, would include a new vehicular entrance off Hawthorne Avenue, redesigned basketball courts, workout stations and a new multipurpose field in the park’s northwest corner. It also calls for replacing the gymnasium with a “wellness/fitness center” with indoor swimming and tennis as well as other gym sports. A “community” option would include the new gym, a bike and pedestrian loop around the park, a clubhouse, a horticulture center, teaching gardens, a splash pad and clearly marked entrances to weave the park into the fabric of the community.

It’s not an either/or/or choice. The eventual master plan will include elements of all three. Some of the best-liked proposals included new indoor and outdoor pools, gathering spaces like a plaza, amphitheater and lawn where movies could be shown, multi-use paths with distance markers and a playground for older kids. People didn’t like the splash pad, horticulture center, labyrinth or hammocks.

One think that won’t be in the plan is a dog park. It would need at least four acres to avoid becoming a mud hole, which is bigger than a ballfield, according to CED’s Jennifer Martin Lewis. Buying an undeveloped tract owned by the VFW next door is a possibility one day, but not one students were allowed to consider, she said.

CED will compile a final report in the coming months and turn it over to City Hall, Cassity said. Then the question becomes, where will we find the money?

Firehall Furor: Is another fight over the Classic Center brewing? The Athens Convention and Visitors Bureau is planning on converting the first floor of the old firehall—saved by historic preservationists in the early 1990s, when city officials were considering a monstrous, modernist design for the Classic Center—into office space.

Rumor has it that the agreement that saved the firehall and incorporated it into the Classic Center’s current design also stipulated that it would remain a public space. However, that’s not the case, according to Smith Wilson, a former Classic Center Authority member, and current authority member and former Mayor Gwen O’Looney, both of whom were instrumental in saving the firehall.

Wilson said in an email and O’Looney confirmed that the space was always intended for administrative uses. Wilson also noted that the design, with partial walls separating seven small offices and a large open hallway, is easily reversible and leaves the pressed metal ceiling (one of the room’s prominent features) exposed. The building’s exterior will not change.

The CVB is moving downstairs from its cramped offices upstairs in to order to be more accessible for walk-in traffic from visitors. “If you go in there any day of the week, it’s empty, there’s nothing in there,” O’Looney said. “I think they’re going to make it a major welcoming center.”

Graduation Rates: After several years of progress under Superintendent Philip Lanoue, graduation rates at Clarke County schools, alarmingly, fell quite a bit in 2014. The percentage of high school students who graduated within four years dropped from 69.5 percent to 63.2 percent. At the same time, the state graduation rate rose from 71.5 percent to 72.5 percent.

Lanoue attributed the decline to students dropping out to take jobs, and said he expects the district’s five-year graduation rate to be better. “Our ultimate goal is for students to graduate, and our five-year rate will demonstrate our commitment to this goal,” he said. “That being said, we are disappointed with our four-year rate, and we will begin looking at needed adjustments over this next week.”