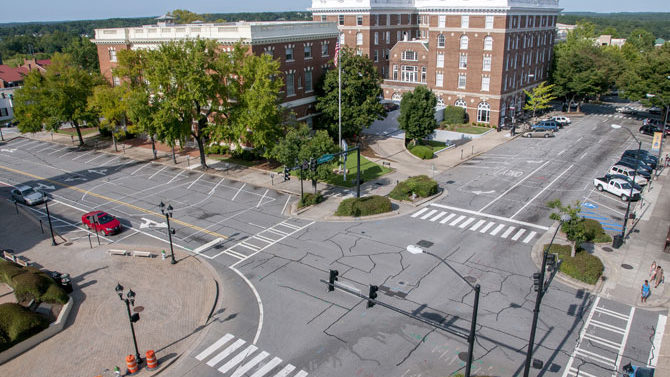 Last Tuesday, Oct. 14 was a marathon slog of meetings—all related to downtown—that turned your humble scribe into a wet, tired, rained-on, spaghetti-stained wretch. I stayed awake for most of them. For journalism. You’re welcome.

First stop: The Athens Downtown Development Authority, which has come up with a plan to keep at least some of the food and beer delivery trucks out of the center lanes of Clayton and Washington streets at least some of the time. “It’s an obstacle course, and it shouldn’t be,” ADDA member Regina Quick said. “We’ve got to find a way to get it fixed. It doesn’t work.”

The ADDA’s plan would allow trucks to keep parking in the Washington Street center lane all day but restrict them to 3 a.m.–12 p.m. on Clayton while also converting 16 parking spaces on Jackson and Lumpkin streets into into loading zones. The plan, of course, pleased hardly anyone, and the ADDA punted it to the Athens-Clarke County Mayor and Commission.

Deliverers worry about competing for loading zones and having to push dollies long distances. Bar and restaurant owners think it’s dangerous to take deliveries in the middle of the night and don’t want to wake up early after long, late workdays. Retail shop owners think trucks are an eyesore and block traffic. Then there are the car drivers who think that, because a truck is parked in the middle of the street, they can, too, which creates an enforcement issue.

“These trucks are killing retail in this town,” said Irvin Alhadeff, who owns Masada Leather as well as a number of other buildings downtown. “It’ll only be a bar scene.”

Alhadeff went on to say that “42-year-old ladies from Oconee County” are scared to drive downtown, which kind of offended ADDA board member Erica Cascio, who informed him that 42 is the new 18. “I don’t know any women in their 40s who are particularly afraid of driving through a town,” she said.

She knows one now—Janey Cooley, a banker who may be a bit older than Cascio. “I’ll never forget the first time I turned on Clayton and thought, ‘My gosh, I’ve gotten into a convoy.’ And it was scary,” she said.

The ADDA also talked about maybe getting rid of some of the (often empty) newspaper boxes downtown. “We’re down to Flagpole, and does the Banner-Herald still print?” Chairman Bill Overend wondered, forgetting momentarily about the Red & Black. Commissioner Mike Hamby called the papers “clutter,” later apologizing for referring that way to Flagpole. (It’s OK—we know you just meant the one with you as a parrot on the cover.)

Then, on to a commission work session, where county officials had a discussion about sidewalk cafés and sidewalk signs.

Bars and restaurants downtown can lease sidewalk space, within certain parameters, from ACC for cafés, but they’re not allowed elsewhere. (Yes, technically, the tables in front of The Grit are illegal, although ACC Manager Alan Reddish said officials are not confident enough in their interpretation of the sidewalk café ordinance to enforce it.)

Central Services Director David Fluck proposed legalizing sidewalk cafés in Five Points and Normaltown. “We’re trying to make it legal for them to use that sidewalk,” Reddish said. “Right now, it’s being done illegally, and we think we’re going to see more of that” as restaurants continue to pop up along Prince Avenue.

On the issue of sandwich-board signs on the sidewalk, there’s no ambiguity—they’re illegal, but a handful of businesses put them out, anyway, although the “vast majority” comply with the law, said Doug Hansford, who oversees the Community Protection Division, ACC’s code-enforcement arm. Hamby said he has no problem with sandwich boards, but county Attorney Bill Berryman warned him that allowing them could set a bad precedent. The commission can’t allow commercial speech (menus and such) without also allowing potentially offensive messages or letting political candidates line the right-of-way with yard signs, he said.

Discussions on those issues have been going on for decades, and they’ll continue. Mayor Nancy Denson said she’s assigning them to committee.

Wrapping up the fun-filled evening was a Federation of Neighborhoods panel on downtown. The thing on everyone’s minds, as usual, was the student apartment complexes that are popping up faster than a Georgia fan after a Todd Gurley touchdown.

Real estate consultant David S. Dwyer said he considers the trend over. “We’re almost fresh out of sites to build downtown,” he said. “I think as far as the big ones are concerned, we’re done.” Great, perfect time on that master plan!

Commissioner Kelly Girtz (who has pushed, unsuccessfully so far, to review our downtown design guidelines in light of the student housing boom) called for more diversity—young professionals, families and retirees, or as Dwyer put it, “FOTS,” Folks Other Than Students.

“The private sector’s been great at providing you 150 places to drink downtown,” said Girtz, who’s only visited 148 of them. “But we know we want a downtown that’s more diverse than that.”

Just wait, said Dwyer, echoing UGA College of Environment and Design professor Jack Crowley’s theory that students are the “pioneers” who draw the retail and services that draw other types of people. Dwyer is helping build Georgia Heights (near SunTrust), which will primarily be one-bedroom apartments aimed at professionals, and he remains hopeful about drawing a small grocery store to the development. “Then we really start to look like a grown-up downtown,” he said.

Setting the Agenda: This won’t happen, but Commissioner Jerry NeSmith wants to make it easier for commissioners to bypass the mayor and put things on the agenda themselves. Currently, five commissioners can call a special meeting, but that’s a huge hassle, and it’s only ever been done once or twice. At the work session last week, NeSmith proposed asking Athens’ state legislators to change the city-county charter to allow five commissioners to simply override the mayor’s agenda-setting power. Denson is opposed, of course, and given disagreement among commissioners and our legislative delegation’s utter inability or unwillingness to do anything for our local government, NeSmith’s proposal is DOA.

But it does highlight a key point, one he alluded to later at the Federation of Neighborhoods meeting—nothing is happening: specifically, the Prince Avenue and Oak/Oconee corridor studies, the aforementioned design guidelines and, he fears, the downtown master plan. The citizens have to put pressure on elected officials to take action, NeSmith said. “You’ve got to make the commissioners make the mayor make the staff do the planning,” he said.