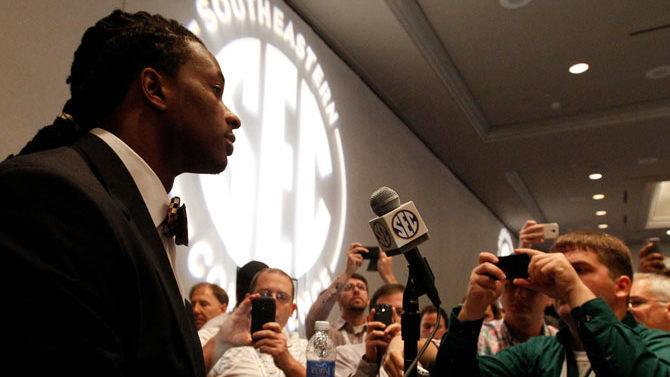 After then-senior UGA quarterback Aaron Murray suffered a season-ending knee injury last year, one of the first things he did was start selling autographs. He lost his eligibility, but his career was over anyway, so who cares?

Murray comes from a well-off family. Not so the Bulldogs’ current star, Todd Gurley, who grew up in a North Carolina trailer park. Gurley (allegedly) did the same thing Murray did, yet now his potential Heisman Trophy campaign is in jeopardy. The reaction from Dawg Nation? It’s as if millions of voices cried out in terror and were suddenly silenced.

According to several sources, one Bryan Allen, a Florida fan from Rome, paid Gurley to autograph items to sell online, then turned around and ratted him out to the media and UGA’s compliance office. Don’t blame Gurley for taking the money. He earned it. And don’t blame UGA for suspending him indefinitely—NCAA rules require it while an investigation is underway. Blame the NCAA for instituting and defending, as Pete referred to it last week, a plantation system where everyone profits except the players.

As Flagpole reported in August, football brings in 85 percent of the UGA Athletic Association’s nearly $100 million budget. Yes, the players get a free education, room and board. But the coaches all make six or seven figures, and no one ever bought a ticket to cheer on a coach. And while UGA and the NCAA can and do profit off Gurley’s likeness, the man himself cannot. Nor, unlike most any other occupation, can he turn pro, because the NFL has decided not to allow 20-year-old grown men to ply their trade professionally. That’s good for universities and the NCAA, of course, because it keeps their stars on TV longer. Not so much for the players.

As of press time, we don’t know yet how Gurley will be punished for violating the NCAA rule prohibiting athletes from profiting off their labor or likenesses, while the NCAA, SEC and UGA rake in the dough. Punishments vary widely—Coach Mark Richt threw Zack Mettenberger off the team for groping a waitress, but last year’s Heisman Trophy winner, Jameis Winston of Florida State, was accused of raping someone and never punished at all. Winston was suspended from the baseball team only when he stole a bunch of seafood from Publix and sat out one game for shouting a vulgar phrase in the dining hall. The previous Heisman winner, Johnny Manziel, was suspended a half-game (against lowly Rice, to boot) over autographs. In 2010, Heisman winner Cam Newton faced similar allegations and was suspended for one day (and not a game day, either). That same year, star UGA receiver A.J. Green missed four games after selling a jersey. All of which serves to further highlight the absurdity of the system.

The “Power Five” conferences, including the SEC, are in the midst of partially breaking away from the NCAA so they can institute a new set of rules that make more sense, given the sheer, stunning amount of money this “amateur” game produces. (UGA is getting $20 million this year from the new SEC Network alone!) Within the next year or two, players will start receiving a larger stipend, as well as residuals from TV and video-game profits held in trust until they leave school, thanks to the O’Bannon ruling. Reform can’t come soon enough.

Leisure Services Fees: For years, the ACC Mayor and Commission has reacted to the Great Recession by slashing Leisure Services Department’s budget and pressuring the department to support itself through fees. Director Pam Reidy, in a June work session, said that she is introducing a new formula for determining fees. Programs will be put into tiers based on how much of the cost to provide them Leisure Services wants to recover. For example, a for-profit business that wants to rent a facility would be charged the market rate. But arts and recreation programs for children and seniors would be heavily subsidized by taxpayers. Overall, though, the department will be looking to raise more revenue from fees, so a lot of things will be getting more expensive, even as a few may get cheaper.

Five Points Parking: Last week, the Georgia Supreme Court ruled in favor of former Five Points property owner Barry Stiles, who sued ACC in 2010 seeking control of 22 parking spaces on Lumpkin Street that are partially on private and partially on public property. (He has since sold the building to Parker Management.) All the appeals are exhausted, and unless you’re going to J. Christopher’s, you’ll have to continue to pray to the based parking god to find an open space in Five Points for the foreseeable future.

Caliente Cab: As pretty much anyone who’s ever tried to hail a cab in Athens knows, the taxi system here is pretty jacked up. I hear frequent reports of price-gouging, drivers refusing to pick people up from or drop them off in certain neighborhoods, even drivers putting people out on the side of the road in order to pick up a more lucrative fare. (All of which, is illegal, by the way, so if it happens to you, call the police and report it.)

The problem is simply supply and demand—a huge demand when the bars close that cab companies simply can’t meet, and very little demand at other times. Uber was supposed to fix this, but the ride-sharing service apparently can’t put enough cars on the road at peak times, either. People periodically ask for late-night “drunk buses,” too, which is a great idea in theory, but Athens Transit tried it in 2002, and it didn’t work (although maybe it’s time to try again).

The ACC Commission has tried to tackle our taxi troubles from time to time, most recently in 2010. Now, Commissioner Kelly Girtz wants to take another crack at it, asking Mayor Nancy Denson to assign a review of the local taxi ordinance to the Legislative Review Committee.

“I think, as a city, we’ve reached a size where taxi services should provide a level of service that’s not always present,” Girtz said.

Bus Challenge: Last month, Tim Denson challenged ACC commissioners to ride the bus to their Tuesday, Oct. 7 voting meeting. Six—Girtz, Allison Wright, Jerry NeSmith, Kathy Hoard, Andy Herod and Mike Hamby—took him up on it, as did commissioners-elect Melissa Link and Diane Bell. “Was it too inconvenient?” Denson asked those who didn’t ride. “Not accessible? Do you not care?”

As the meeting stretched on unexpectedly into its second hour NeSmith said, “I hope I didn’t miss my bus, but if I do, I’ll probably take Uber.”