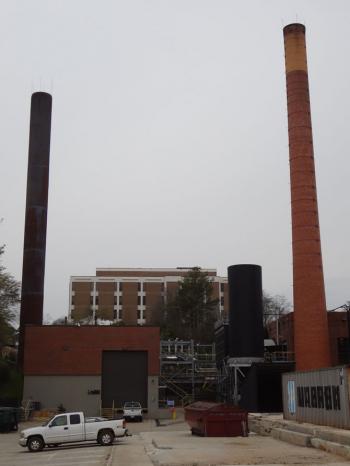 At long last, after years of protests, the University of Georgia is finally getting rid of its coal-fired boiler, President Jere Morehead announced last week.

The decision came after a study by consultant Jacobs Engineering, initiated in 2013, examined options for replacing the 50-year-old boiler, which is the single largest source of pollution in Athens. The most economical solution is an electrode boiler that UGA officials said would cost $4.5 million to install but save $19 million in operating costs over 30 years.

The electrode boiler creates steam to heat campus buildings using electricity, which in Georgia is mainly produced by—you guessed it—burning coal. Although administrators couldn’t say at a media briefing how much less pollution the new boiler will generate, Vice President for Finance and Administration Ryan Nesbit said it will “generate savings that can be invested to enhance the university’s teaching research and service activities” and “reduce our overall energy consumption on campus.” The decision on a replacement came down to cost and energy efficiency, not pollution, Morehead said.

Give Morehead credit for moving quickly, making a decision eight days after receiving the Jacobs report. The old boiler would shut down in February 2015, and the new one would come on-line in November 2015. Three natural gas-fired boilers will remain in operation.

Other options Jacobs examined included natural gas- and fuel oil-powered boilers, which are cleaner than coal but have more fluctuation in price. (The coal boiler is something of a bulwark against rapidly spiking gas prices.) Jacobs said those alternatives would never recoup their costs. A combined heat and power plant, as it’s known, is not a viable economic option; if it were, that would have been the obvious choice, said David Spradley, director of energy services for the UGA Facilities Management Division.

Consultants also considered a biomass-burning boiler, but the report raises questions about whether biomass is truly carbon neutral. It would take a lot of trucks to bring all those wood scraps on campus.

Beyond Coal, a group formed by the Sierra Club Student Coalition to pressure the administration into shutting down the coal boiler, didn’t return an email seeking comment.

The electrode boiler still needs approval from the Board of Regents, which meets Oct. 14–15 in Valdosta.

Assuming it’s approved, the new boiler will bring an end to coal deliveries on a 3.8-mile rail spur running through campus. Could that pave the way, so to speak, for downtown master planner Jack Crowley’s dream of passenger rail and a multi-use path between the Multimodal Center and the State Botanical Garden? Not anytime soon. “We’d be happy to see those developments take place in the future, but it’s a long way off,” Morehead said.

Thinking of a Master Plan: Speaking of Crowley, the downtown master plan is the topic of a Federation of Neighborhoods meeting Tuesday, Oct. 14 at 7:30 p.m. at Cine. Note the change from the usual first-Monday date.

And the ACC Leisure Services Department is master-planning Bishop Park. Fill out a survey here and/or go to a kickoff meeting from 6–7:30 p.m. Monday, Oct. 6 at Oglethorpe Avenue Elementary School.

More Morehead: At the Wednesday, Sept. 24 media briefing when Morehead announced the boiler replacement, he also tackled a number of other issues, including sexual assault on campus (see p. 6).

One was growth. UGA’s incoming freshman class is one of the largest in school history, but Morehead said he doesn’t anticipate much undergraduate growth, although he’s trying to beef up graduate programs. “What I anticipate seeing is small, incremental growth that might vary from year to year,” he said.

Another was football money. As Flagpole reported in August, Bulldog football is an $85 million industry, and that number will spike sharply soon. The SEC Network, launched two months ago, was the most successful new cable channel in history, and as a result, the UGA Athletic Association is expecting a $20 million influx. Augmenting players’ scholarships will be a new (and as yet unknown) cost, Morehead said. He also said he expects athletics—which spent $4 million on endowed professorships and need-based scholarships last year—to continue to contribute to academics.

Lexington Road: “Disaster” is a word Athens-Clarke County traffic engineer Steve Decker kept using when talking about the Lexington Road-Barnett Shoals-Loop intersection. You know, the one that backs up practically all the way to downtown during afternoon rush hour.

But there’s very little he can do about it, Decker told a committee Mayor Nancy Denson appointed to look for ways to spruce up the Lexington Road corridor Monday, Sept 22. He’s tried to adjust the traffic signals’ timing every which way, he said.

“I can sit there and watch it back up, but I can’t do anything about it,” Decker said.

Relief will come in 2016, when the Georgia Department of Transportation will start on a two-and-a-half year project to realign the Loop’s on- and off-ramps. The project will involve moving the Outer Loop ramps to the other side of Lexington Road, where they’ll line up with Barnett Shoals, eliminating a traffic light and easing the bottleneck at that intersection. Old Winterville Road will be realigned with the Inner Loop ramps. Longer left-turn lanes will help, too.

Lane closings will be required, so construction will make the situation worse before it gets better, Decker warned, but once it’s done, traffic will flow much more smoothly.

Prince Avenue: GDOT and ACC officials conducted a long-awaited safety audit on Prince Avenue Sept. 30, according to Commissioner Kelly Girtz. A team that included Complete Streets: Prince Avenue mastermind Tony Eubanks, UGA planner Lara Mathes, BikeAthens Executive Director Tyler Dewey and ACC Transportation and Public Works Director David Clark walked the corridor (both the locally and state-owned portions) looking for ways to improve vehicle and pedestrian safety. Look for a report on their findings in about six weeks, at which time the mayor and commission will kill it with fire and bury it right next to CAPPA and the corridor study, never to be seen again.

Vote or Die: Just a reminder that the last day to register to vote in the November elections is Monday, Oct. 6. So go do it, if you haven’t already.