A New Downtown Hotel Is Asking for a Sweetheart Deal 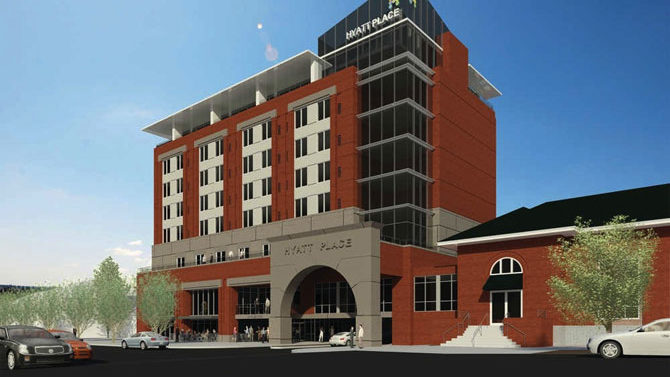 The state of Georgia and Athens-Clarke and Oconee counties gave that manufacturer a package of tax breaks and infrastructure worth more than $70 million to build a plant in Bogart. While it’s unfortunate, these giveaways are par for the course for industries that employ hundreds and thousands of people, as companies pit state against state to see who’ll give them the best deal.

Now, apparently such largesse extends even to more mundane businesses. After offering property tax breaks to the Eastside Publix and the giant new Kroger under construction off Highway 72, the ACC Industrial Development Authority was prepared to grant $30 million in low-interest bonds and millions of dollars’ worth of property tax abatements for a new Hyatt Place adjacent to the Classic Center. The tax breaks would have saved the Hyatt (and cost the county) about $2.5 million over a 10-year period.

The agreement—negotiated in secret starting in 2008—came to light last week when the IDA met to vote on it Thursday, June 12. These things are generally done deals by the time they become public, but surprisingly enough, the authority reversed course and did the right thing, failing to approve it by a 3–2 vote. The seven-member board requires four votes for passage, and two members, Mike Morris and Jinx Patel, were absent. For the record, Chairman Gus Burnum, ACC Commissioner Mike Hamby and Jeanne Westbrook voted in favor of the sweetheart deal; Charlie Barron and David Hamilton voted against it.

Not to pick on Hamby, because dozens of people were involved in the negotiations, but he did take the lead in arguing in favor of the deal, along with Ryan Moore, director of the ACC Economic Development Department.

The Classic Center is missing out on 10 conventions a year that would bring $5 million into the local economy because it doesn’t have an attached hotel, according to Moore. The Hyatt would also create 60 construction jobs and 75 permanent full-time jobs, he said—figures questioned by David Dukes, vice president of Benson’s Hospitality Group, which owns four local hotels.

Hamby recalled meeting a couple at the Welcome Center who were staying in Commerce because the Methodists’ conference at the Classic Center had taken up all the hotel rooms in Athens. “In my mind, that’s money leaving this community,” he said.

Which doesn’t answer the questions raised by Regina Quick, a lawyer, state representative and Athens Downtown Development Authority board member: Why are these incentives needed? Is the project a risk? Can’t the developers find private financing? If not, is there really a need for another downtown hotel?

“If they think it’s so great to have a connecting hotel, that’s a business decision on their part to raise the money to do it,” Barron said.

Hamby raised the specter of businesses leaving Atlanta Highway and moving to Epps Bridge Parkway. Tax breaks are a tool to keep that from happening, he said. “A lot of it’s going to go Oconee County, and it’s going to fall back on all of our property taxes,” he said.

But that dynamic doesn’t apply here. A hotel with a business model contingent upon being attached to the Classic Center can’t be in Oconee County. Eventually, Hamby fell back on the argument that it’s too late to turn the ship around, noting that the IDA had already unanimously approved the agreement in preliminary form—and, it should be noted, negotiated the package down from $4 million. “I can’t imagine anything worse, more business-unfriendly” than backing out at the 11th hour, he said. Our government is too scared of being called “anti-business” to ponder the difference between being friendly to business and bending over for it.

Besides, existing hotel operators certainly didn’t consider the Hyatt giveaways business-friendly. “To my knowledge, no hotel has ever gotten this kind of deal,” said Mike Waldrip, president of the Athens Area Hotel Association.

The Hilton Garden Inn downtown and the Best Western on Milledge Avenue are expanding, a new Fairfield Inn is planned, and the Foundry Inn is undergoing a multimillion renovation, Waldrip noted in a letter to the IDA. “None of these owners has asked for the preferential treatment that is being proposed for the Hyatt,” he wrote. “However, if the revenue bonds and tax abatements are granted, you can rest assured that these projects and any others in the future will certainly consider that a viable option.”

In other words, this deal is an invitation to every business owner in Athens to blackmail the ACC government. Just threaten to move to Oconee County and get half off your tax bill!

It is “unknown at this time” what the vote means for the project, Moore said.

Athens for Everyone: The political organization that is growing out of Tim Denson’s mayoral campaign met for the first time Saturday, June 14. While turnout was good—about 80 or 90 people—the event seemed to lack the energy of the campaign. Agree or disagree, this city sorely needs a loyal opposition. Let’s hope Athens for Everyone is it.