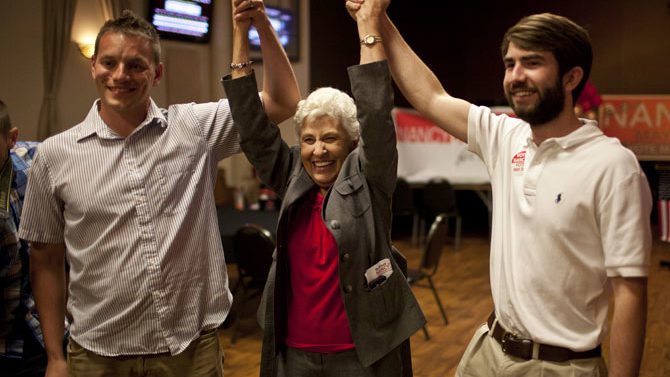 The people have spoken—at least, 8 percent of them.

Athens’ voting-age population is 101,650. Of those, 54,683 are registered to vote locally. Of those, 13,952 bothered to show up. Of those, 8,174 cast their ballots for Mayor Nancy Denson. Those numbers are embarrassing—especially in a community that prides itself on being involved.

“Low turnout is always a concern for me, because it’s not healthy to have a few people making decisions for the whole country,” Nancy said on Election Night.

The low turnout probably was due to the state legislature moving Athens-Clarke County’s local nonpartisan elections—against our will—from the November general election to the July primaries, and then a federal judge moving those primaries up to May 20, the earliest they’ve ever been. But with all the newspaper, radio and TV coverage, the social media chatter, the yard signs, the billboards and the mailers, who could have possibly not known?

Anyway, upstart challenger Tim Denson did as well as could be expected, organizing a terrific ground game, but he was saddled with limited funds and, because of the compressed schedule, had just 10 weeks to introduce himself to an electorate that had mostly never heard of him before. He wound up with 40 percent of the vote but won just four of 24 precincts: Lay Park in Pulaski Heights/Newtown, Memorial Park in Five Points, Chase Street School in Boulevard/Cobbham and the Multimodal Center downtown (by a mere 60–58 margin in what is one of the smallest, most student-heavy and lowest-turnout precincts).

It was the same old tale of two cities: inside the Loop versus outside the Loop. Nancy summed up her platform as “more of the same,” and this may be hard for people in the intown bubble to understand, but plenty of folks think things are just peachy. A lot of people don’t go downtown much, so any development that adds to the tax base is fine with them. A lot of people drive everywhere, so who gives a fig if the bus system is inconvenient, cyclists get run over or it’s dangerous to cross Prince? And so Nancy, as she did in 2010, rode a wave of suburban support to victory. (Of course, give her credit for running hard, too.)

Now that the election is over, Nancy has an opportunity to unite the community. She can start by bringing forward a solution to the Prince Avenue pedestrian safety conundrum after a June 10 work session to discuss the issue, assigning downtown design guidelines to committee and working to implement the transit study she has included in her budget for the coming year. In other words, get the wheels of government turning again.

Tim and his supporters—jubilant in defeat at their Election Night party—declared victory because of the issues they brought to the table and promised to continue fighting for a living wage, child care and better transit. “It doesn’t matter that I had fewer votes,” Tim said in a defiant concession speech. “It doesn’t matter that Nancy has four more years. Because she’ll have to deal with me and the thousands of voters who want an Athens for everyone.”

To that end, Tim’s campaign is transitioning into a new activist organization called Athens for Everyone. Its first meeting is at 2 p.m. Saturday, June 14 at the library. Let’s hope it sticks—this town could use a loyal opposition.

Commission Races: It’s rare that an incumbent loses, so the shocker of the evening was Sharyn Dickerson’s 60–40 victory over District 1 Commissioner Doug Lowry. Though he often brought a valuable perspective to a commission that can at times march in lock-step, Lowry is an iconoclast with a disdain for county staff, and apparently the voters had enough.

District 5 Commissioner Jared Bailey retained his seat by a 54–46 margin over another of Nancy’s choices, Dave Hudgins. That’s in spite of a redrawn district that removed his base in Cobbham and Boulevard, leaving him with more rural areas that favored Hudgins in 2010.

Some readers will recall that former state Rep. Doug McKillip (R-Athens) virtually unilaterally redrew ACC Commission districts two years ago with the stated goal of improving minority representation (though the real goal was getting closet Republicans elected). Well, surprise! It didn’t really work out that way.

Bolstered by the Cobbham and Boulevard voters who shifted from District 5 to District 3, progressives Melissa Link and Rachel Watkins made it to the July 22 runoff. In part because Link ran hard in black neighborhoods like Rocksprings and Broadacres, Herb Gilmore finished third, so District 3 will have a white commissioner for the first time since unification in 1990. In a county that’s 27 percent black, Harry Sims will be the lone African American on the 10-member commission come January.

Bye, Broun: Read more about the U.S. Senate and congressional primaries in Capitol Impact, but let me note here that U.S. Rep. Paul Broun’s political career is most likely over. He left his House seat to run for Senate and finished a distant fifth with 9.6 percent of the vote. The idea that he could be a senator turned out to be a lie straight from the pit of Hell.