Mayor Nancy Denson and Tim Denson Face Off at Forum 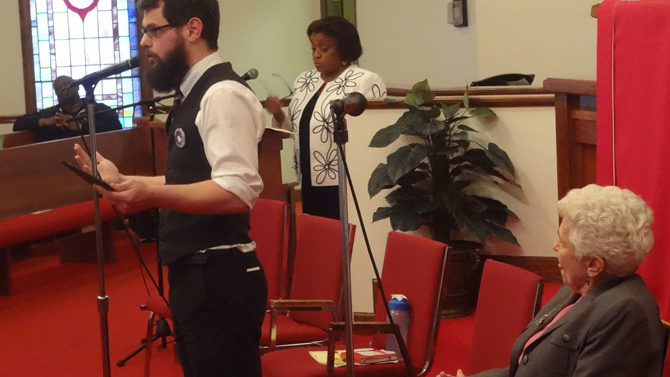 Mayor Nancy Denson came out swinging in Round 3 against challenger Tim “No Relation” Denson. (Yes, I’m going to wring this lame boxing metaphor for everything it’s worth.)

Refereed by Janice Mathis, the Densons debated for the penultimate time Monday, Apr. 21 at East Friendship Baptist Church. Tim started off by jabbing Nancy over Athens’ 38 percent poverty rate. Families can’t afford healthy food and can’t take second jobs to make ends meet, because they can’t afford child care, he said. “That’s not a choice people in this community should be making.”

Considering the oddsmakers overwhelmingly have their money on Nancy, she was surprisingly aggressive. After East Friendship deacon and Athens-Clarke County Commissioner Harry Sims joked that candidates who visit the church usually do very well at the polls, Nancy taunted Tim like he was Joe Frazier, telling him “you better quit now,” because she’s been visiting there for 30 years.

Nancy said she would knock out poverty with education and jobs and attacked Tim again for fuzzy math on his anti-poverty proposals like free child care and bus service. “You’ve got to balance the budget,” she said. “You’ve got to live within the means you have. A lot of things would be wonderful if we had the dollars to afford them.”

They exchanged blows on the bus, with Tim again pointing to Clemson, SC, as an example of a free combined town-gown transit service. “It’s like comparing tigers and dogs (dawgs?),” Nancy replied. “They both have four legs, but they’re very different,” because Clemson has more students than “regular citizens.”

Health Sciences Bus: We were the first to raise the alarm about an ACC-UGA transit agreement that would require the UGA Health Sciences Campus bus to quit stopping to pick people up or drop them off on Prince Avenue. The process worked like it’s supposed to for once—readers got bent out of shape and bent their commissioners’ ears, and they reversed course.

When discussion at the East Friendship forum turned to transit, Nancy announced that she supports delaying a decision on the Health Sciences bus until after a comprehensive transit study is done later this year. She blamed commissioners Jerry NeSmith and Kelly Girtz for wanting to kill the Health Sciences bus because it is taking revenue away from Athens Transit (although Girtz and NeSmith were the ones who suggested waiting until after the study).

The following day, Nancy released a commission-defined option (i.e. something other than approving or rejecting what staff has proposed) to that effect. Oddly enough, the option was released through her campaign rather than the mayor’s office. It bore the names of commissioners George Maxwell, Andy Herod, Kathy Hoard and Mike Hamby—all of whom have endorsed her. NeSmith, Girtz and Commissioner Jared Bailey (the latter two represent parts of Prince) were for some reason left out of the loop.

Give Nancy credit for finally being responsive to people on Prince, many of whom are UGA students and employees who value the free and frequent Health Sciences bus. But this smells like a political ploy.

Back in the Ring: The candidates tussled over other issues, too. Tim questioned why the position of ACC auditor, which is required by the county charter, has been vacant for nearly a year since Nancy and the commission canned John Wolfe under dubious circumstances last June. (Nancy reportedly wanted to fire the director of the Athens Downtown Development Authority because she didn’t like the way she dressed, and Wolfe didn’t provide the political cover to do so.) Appointing an auditor would be an “extremely high priority” for him, Tim said. “Mr. Denson, you’ll never get the chance to fill that job, because it will be filled by July 1,” Nancy said. Tim accused Nancy of “dragging [her] feet. Things not happening. Lack of action. I’ve even heard people use the word ‘obstruction.'”

Student apartments downtown were another hot topic. People might think they’re “messing up our beautiful downtown,” Nancy said, but the zoning code was written with citizen input, and people wanted it at the time. Tim said the code needs to be updated to promote more sustainable development. “I don’t want to see apartment buildings built up that are going to be here for 10 years before falling into disrepair,” he said.

District 1: Commissioner Doug “Lone Wolf” Lowry traded on his harsh treatment of ACC staff (for example, trying to get the Solid Waste director and county manager fired). “I’m very well known… for taking action against the positions the staff has taken,” he said. Challenger Sharyn Dickerson—who was on the other side of the rail as recycling coordinator for 14 years—said she understands how staff operates and what questions to ask.

The only other point of contention was that Dickerson favors backyard chickens and Lowry doesn’t.

District 3: In local races, anything but relentless boosterism, lip service to our problems and vague platitudes (Jobs good! Poverty bad!) tend to be punished by voters. Candidates often are afraid to disagree on policy for fear of being labeled as mean, and it’s difficult to find one molecule of air between the four candidates to replace Commissioner George Maxwell on the issues; not to mention that forums often give candidates precious little time to respond to questions. It’s all about style.

Link displayed the best grasp of the issues and offered the most specifics. Her aggressive tactics rub some folks the wrong way, though, and Watkins plays nice with others. “To be a commissioner, you have to listen to your constituents and work in a respectful tone with people you disagree with,” Watkins said, pointedly.

Herb Gilmore, who used to be a planning commissioner and knows his stuff, said nothing really noteworthy. We need plans and jobs and education. His yard signs seem to have a symbiotic relationship with Nancy’s, which is probably all you need to know.

Criminal defense lawyer and political newcomer Dustin Kirby had one intriguing idea: passing a “parallel ordinance” on marijuana possession. If you were caught with pot, basically you’d be given a ticket under the local ordinance rather than charged with a crime under state law.

District 5: Lawyer and planning commissioner Dave Hudgins, who’s once again challenging Commissioner Jared Bailey in this northwest district, kept talking about “smart growth.” I think he meant the other thing.

Calling the Health Sciences Campus an “economic boon,” Hudgins said he is not necessarily opposed to zoning restrictions called for in the long-dormant Prince Avenue corridor study, but he is concerned about going too far. Dense development, especially health-care-related development, would relieve the tax burden on homeowners, he said.

“We should have respect for the neighborhoods and not just put any project on the Prince Avenue corridor,” Bailey said.

Hudgins spent a lot of time talking about how long he’s lived in Athens (almost his whole life). “I’m your local candidate,” he said. “My heart is in the 5th District. It always has been.” The unspoken subtext is that Bailey, in spite of owning a house on Sunset Drive Marsha Court, spends an awful lot of time with his wife in Oconee County.

“Although I’ve lived here for 37 years, it’s not just how long you’ve lived in the community, but what you’ve done for the community,” said Bailey, who founded Flagpole, AthFest and the Athens Arts Council.

More Forums: The final (as far as I know) candidate forum, sponsored by the Federation of Neighborhoods, is scheduled for 7 p.m. Monday, May 5 at The Melting Point. Tune in on WGAU 1340 AM if you can’t make it.

Incidentally, Flagpole tried to organize a forum with the University of Georgia GPB and NPR affiliate WUGA-FM, but UGA Vice President for Public Affairs Tom Jackson pulled the plug because Mayor Nancy Denson declined to participate.

Another forum to put on your radar is at 7 p.m. Wednesday, May 7 at the library. The Cedar Shoals and Clarke Central PTOs have invited the roughly 37,000 candidates for state school superintendent to participate. (Seriously, there’s like 15 people running. It’s ridiculous.)

Sexual Assault: If you haven’t already, read Alex Laughlin’s harrowing tale of sexual assaults on the UGA campus that too often go unpunished. In that light, it’s worth noting that this is a political issue in the mayor’s race. Tim Denson has proposed forming a Sexual Assault Prevention Task Force. When questioned at a Young Democrats forum last month, Nancy said that the city and organizations like the Cottage and Project Safe already are doing everything in their power to prevent it.