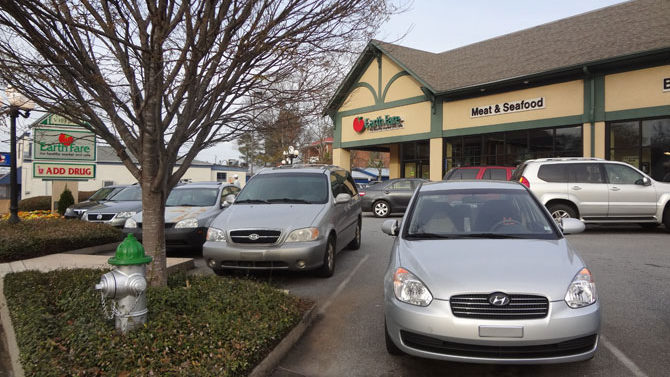 Reversing her earlier position that she would support temporarily reconfiguring Prince Avenue this fall, Mayor Nancy Denson said last week that she’s now in no rush to schedule a vote on the pilot project. “I don’t feel a sense of urgency,” she said. “It needs to be very well thought out. We need to have a lot of questions answered.”

Denson said as much in an email obtained by Flagpole. Any permanent changes to Prince Avenue would be made during repaving in four or five years, she said, so there’s no rush to test out a road diet with pedestrian refuges at dangerous mid-block crossings on the locally owned portion of Prince between Pulaski Street and Milledge Avenue.

Denson said she has asked Athens-Clarke County Manager Alan Reddish to schedule a work session on the issue June 10 and is unlikely to call a July vote on conducting the test in October, as Commissioner Kelly Girtz had wanted. “I just have not committed to a time frame for it,” she said.

Girtz expressed frustration and disappointment. There is a time element involved, he said—the Georgia Department of Transportation is doing a Complete Streets study of the state-owned part of Prince west of Milledge, which could put ACC in the embarrassing position of being somehow less progressive than the state. He said he wants to see some action coming out of the work session, not yet another committee or study. “I’m in an action-oriented mood,” he said. “Talk is cheap.”

Area residents, Girtz said, have been waiting a long time for something to be done about pedestrian safety on Prince. Denson, though, said she’s heard little public outcry. “I’m not getting many inquiries from people asking for that,” she said. “Maybe six at the most.”

That email address is nancy.denson@athensclarkecounty.com, in case you’re inclined to share your opinion.

Tim characterized himself as a fresh face bursting with new ideas on issues ranging from economic development to sexual assault, using the word “ambitious” over and over again. “I want to shoot for big goals that will help our entire community,” he said.

Nancy, as one would expect from the incumbent, ran on her record: primarily Caterpillar and all of the development that’s been happening around town lately. The Athens Banner-Herald’s Jim Thompson reported that her tone was “decidedly conservative.” She generally criticized Tim’s ideas—free public transit and expanded child care programs, for example—as too idealistic. “Many of the things he would love to do, I would love to do, but you have to prioritize scarce resources,” she said.

While neither candidate was particularly impressive—Tim seemed a bit jittery and still has not explained how he’d pay for some of his proposals—even some Nancy supporters were dismayed by her performance. She rambled at times and completely lost her train of thought on at least one occasion.

Then there was Earthfaregate. Tim proposed requiring stores to charge a fee to shoppers to use plastic bags, an environmental measure that was proposed here in 2009 and went nowhere, but it’s been done in Washington, D.C.

Nancy, though, said such a fee would drive grocery stores out of Clarke County and primarily affect the poor, not “the little yuppies who get in their SUVs and go to Earth Fare.” The comment drew some outrage on social media. Journalist and Five Points resident Rebecca McCarthy joked about forming a group called “Earth Fare Shopping Yuppies for Tim.”

Tim responded to Nancy by saying that businesses would keep part of the fee to offset any additional costs, and shoppers could avoid it by bringing their own bags or asking for paper. The point is not to charge people extra, but to get them to stop using plastic bags.

A few days later, a tipster spotted Nancy awkwardly photographing a confused-looking woman holding a bunch of plastic bags at a bus stop on Chase Street, so expect this issue to turn into kind of a thing.

Combined with the Prince Avenue controversy, could Nancy (mildly) insulting a wide swath of largely overlapping voters give Tim an opening? As one keen political observer told me, “This one might get interesting.”

Then there was the revelation that Nancy, like Tim, favors reducing the penalty for marijuana possession. “I would like to see small amounts of marijuana decriminalized,” she said. “This is the first time I’ve said that publicly.”

The comment may have caused the mayor’s campaign some heartburn. She released a statement the next day clarifying her stance, saying that she supports a state-level bill to legalize medical marijuana, as well as decriminalizing marijuana possession on the state or national level, but plans to take no action locally.

“While I do not support legalizing marijuana, I find it unconscionable that we ruin the lives of young people by creating criminal records for possession of small amounts of marijuana that follow them for the rest of their lives,” she said.

Sine Die: When state legislators convened in January, they promised a quick session and planned to pass a budget and not much else so they could go home and raise money in advance of the earlier-than-ever May 20 primary. It’s an election year, so we should have known better—they at least took a hard look at a host of measures appealing to the Republican base, including a sweeping gun bill, an attempt to nullify the Affordable Care Act and further restrictions on abortions. Tom Crawford ably covers the session’s end in Capitol Impact on p. 6, but here’s a look at some bills of local interest.

The aforementioned gun bill did pass, but without a clause that would have reduced the penalty for carrying a gun onto a college campus to a measly $100 ticket. Gov. Nathan Deal stopped that provision on the last day of the session Thursday, Mar. 20 by expressing his opposition. However, going downtown will get a lot more dangerous—assuming Deal signs the bill, guns will be allowed in bars unless the owner specifically bans them. The bill originally did the same for churches, but now it’s an opt-in, so congregations will have to vote if they want to allow guns.

A watered-down version of a bill that would have scuttled the federally funded University of Georgia health care navigator program also passed. The bill bars government employees from pressing for Medicaid expansion, rather than the Affordable Care Act as a whole, so UGA navigators can continue to help people sign up for insurance through the federal exchange (which, of course, was never the same as advocating for or against the law, no matter what the tea party might think).

Other bills would allow the state Department of Human Resources to drug-test people who get Supplemental Nutrition Assistance Program benefits, aka food stamps; declare 60,000 contract workers at public schools ineligible for unemployment; and take away abortion coverage for people on state insurance plans, such as K-12 teachers and UGA employees.

Better news for Athens residents: The aforementioned $21 billion budget does include $44 million for a new UGA science learning center on College Station Road South Campus, as well as additional funding for HOPE grants for students at Athens Tech and other technical colleges.

The medical marijuana bill, however, has died. Sorry, Tim and Nancy!