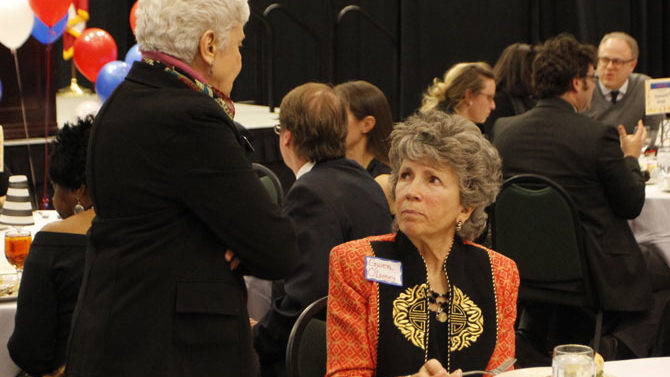 As the clock ticked toward noon on Friday, Mar. 7, Mayor Nancy Denson and a handful of others gathered at the Athens-Clarke County Board of Elections to see who might walk through the door. Heidi Davison? Jim Ponsoldt? Kathryn Lookofsky, who teased her Facebook friends with a post asking for help with the qualifying fee?

As it turned out, no one. The qualifying period ended with just the two Densons, Nancy and Tim, on the ballot for mayor. The long-rumored surprise progressive candidate never materialized. So all the progressives who don’t like what Nancy’s done but had been poo-pooing Tim Denson’s chances (and they are slim) had better jump on the bandwagon fast. Sit it out and slim dwindles to none.

Commissioner Jared Bailey, who had wavered for months about whether to challenge the elder Denson, opted instead to run for re-election. “I feel like I’ve got a commitment to District 5,” he said. “Being a commissioner, our work is critical to the success of the community… The commissioners are the ones who really make the decisions.”

Bailey is in a rematch with lawyer and planning commissioner Dave Hudgins—this time in a new district that no longer includes Bailey’s base of support in Cobbham and Boulevard. But Bailey said he has worked hard to build relationships in the neighborhoods that are new to his district and is confident he will win.

Next door, in District 3, Boulevard residents Melissa Link and Rachel Watkins are competing for support on Bailey’s old turf. A surprise candidate, lawyer Dustin Kirby, who lives in University Tower downtown, jumped in as well. Herb Gilmore qualified, as expected, making it a four-person race.

Gilmore qualified Friday morning with a small entourage that included the Rev. Ben Willis, formerly of Billups Grove Baptist Church, the Rev. Abraham Mosely of Mt. Pleasant Baptist Church and the retiring Commissioner George Maxwell, whom Gilmore is seeking to replace and who is endorsing Gilmore.

“I’ve known Herb for a while,” Maxwell said. “He’s in the neighborhood. [Gilmore lives on Old West Broad Street.] He’s been in government before, on the planning commission. And he supported me when I ran, so I’m returning the favor.”

In District 1, Sharyn Dickerson is challenging Commissioner Doug Lowry. Dickerson was the first head of Athens-Clarke County’s recycling program, so presumably she is running in response to the bee in Lowry’s bonnet about the Solid Waste Department. She couldn’t be reached for comment by press time, though, and neither could Kirby.

Only one candidate is running for each of the five Clarke County Board of Education seats up for grabs this year—incumbents Linda Davis, Sarah Ellis, Carol Williams and Ovita Thornton, and newcomer Gregory Davis in District 1, where Denise Spangler declined to seek re-election.

Broun Rowndup: A six-year-old piece of opposition research delving into Broun’s divorces, bankruptcy, subsequent court battles and loss of admitting privileges at Georgia hospitals made the rounds on the Internet last week. No one seemed to know where it came from, so I’ll solve the mystery: Barry Fleming’s campaign put it together when Fleming ran against Broun in the 2008 GOP primary. I wrote about it for the Athens Banner-Herald. So it’s old news. I’m not sure who has dredged it up again, though signs point to one of Broun’s Republican opponents in the Senate race. In politics, when everyone’s coming after you, that’s how you know you’re winning.

Red Barn: The University of Georgia finally has found a permanent home for its iconic Red Barn, which has been falling into disrepair and threatened with demolition since UGA moved it from College Station Road to university-owned property near the State Botanical Gardens on South Milledge Avenue in 1997 to make way for a never-built alumni center.

Tony Townley, executive vice president of the chicken-finger chain Zaxby’s, is moving the 100-year-old barn to the former UGA Plant Sciences Farm in Oconee County he bought last year (Townley’s great-grandfather once owned part of the farm). The move is pending approval from the University System Board of Regents.

“I just think the Red Barn will be neat out here on the farm that the university once owned,” Townley said in a news release Friday, Mar. 7. “It is such an iconic red barn, probably one of the older barns in this part of the state still intact.”

About 75 people came to a Federation of Neighborhoods meeting Monday, Mar. 3 to hear Eubanks and ACC Commissioner Kelly Girtz discuss their plans to put the intown part of Prince on a road diet, temporarily shrinking it down to two travel lanes and a center turn lane with pedestrian islands to see if that configuration will make it safer for both cars and people on foot without impeding traffic too much or pushing it off onto side streets.

Moderator Wendy Moore opened the meeting by asking the audience what they liked about Prince Avenue. Several people mentioned the locally owned businesses, the Health Sciences Campus bus and people who care about the community.

One gentleman piped up to say, “I like that you have two lanes going each way, and I can get in and out of town.” Oh, boy. Here we go.

Which has always been the argument over Prince: Is it a highway to speedily bring cars from the suburbs to downtown, or is it an urban neighborhood street where people walk to pick up a loaf of bread or take their kids to school? It’s both, of course. The challenge is getting people to see it both ways.

“It’s a change,” Eubanks said. “It scares people. But we have thought this throughout.”

As Girtz pointed out, the configuration of Prince Avenue is the same where it funnels cars onto the Loop as where it passes through neighborhoods filled with churchgoers walking to brunch and parents walking their children to school.

Girtz and Eubanks reluctantly agreed to push back the experiment from April until October, well after the May 20 election, at Mayor Nancy Denson’s request. She thought it would be an “entanglement” due to the long history of fights over the road, Girtz said. There is a six-week period this fall without a Bulldogs home game to skew the results. Girtz said he is pushing Denson to schedule a July commission vote.

Concerns remain about how drivers who are new to Athens will react to the reconfiguration if it’s done near the start of school in the fall. Eubanks quoted Police Chief Jack Lumpkin as saying, “We’ve got the worst drivers in the world, and every fall, we import 6,000 more.”

Even if the pilot project really does take place and is successful, Girtz warned that it could be several years before it’s made permanent. ACC policy requires the commission to consider road diets whenever a four-lane road is up for repaving. In Prince Avenue’s case, that’ll be three or four years from now, he said.

Road-diet proponents are trying to keep costs to a minimum, and it’s cheaper to restripe and add new crosswalks and pedestrian refuges during repaving than it would be to build them on their own. Even the pilot project will be bare-bones: essentially burlap coffee-bean sacks donated by Jittery Joe’s and tires salvaged from the landfill with plantings in them, mostly done with volunteer labor and requiring only about 40 hours of ACC staff time, Girtz said.

Several attendees advocated overruling Denson and forcing the issue onto the agenda, but Girtz and Eubanks said they are taking a diplomatic approach to avoid inflamed passions. “The whole thing hinges on keeping the conversation civil,” Eubanks said.

And civil it was, for the most part. By the end, even Bob Shields, the Jefferson Road resident who wanted to go fast at the beginning of the meeting, was starting to come around. “I’m glad to see this presentation,” he said. “It has opened my mind up a lot.”