Jason Carter Gets Democrats Fired Up and Ready to Go 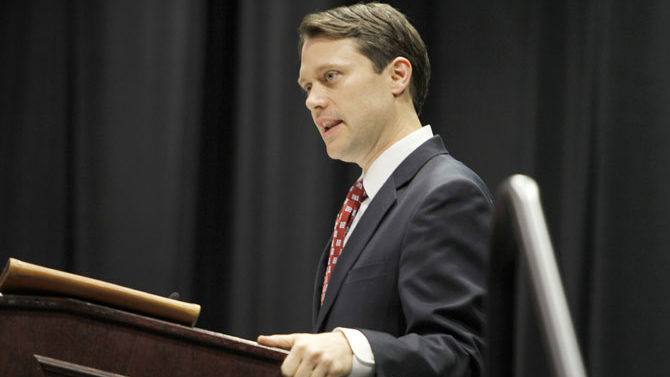 An estimated 400 people turned out to hear a speech by state Sen. Jason Carter (D-Decatur), the party’s likely nominee for governor, at a Clarke County Democratic Committee fundraiser Thursday, Feb. 27 at the Classic Center. Local Democrats called it one of the largest crowds in memory for a party event, second only to a 2012 victory bash for President Barack Obama at the Georgia Theatre. Past fundraisers have drawn about 250 people.

Democrats called the turnout a sign that, after 12 years of defeats at the polls in Georgia, Democrats have the momentum going into the November election. A recent poll showed that Carter is essentially tied with Republican Gov. Nathan Deal. “Anybody who thinks Democrats are dead needs to look around this room,” Mayor Nancy Denson said.

The crowd at the $75-a-head fundraiser included 50 teachers who were sold discounted tickets subsidized by an anonymous donation. They heard Carter and local party chairman Joe Wisenbaker hammer on Republicans for cutting a cumulative $7 billion from the state K-12 education budget over the past decade. Class sizes have increased in 95 percent of school districts, and three-quarters now have fewer than the 180 school days once mandated by law, Carter said.

“They have dismantled our education system,” he said. “They are trading tomorrow for today.”

The education cuts are draining the state economy, Carter said. He accused Republicans of pursuing low-wage jobs as the middle class tanks. The state’s median income, adjusted for inflation, has fallen by $6,000 since the recession hit in 2007, dropping Georgia’s ranking from 15th to 33rd, he said. Without educated entrepreneurs and consumers with spending money, the economy will never recover, he said.

Carter proposed separating education from the rest of the state budget and voting on it before everything else. “That’s what it means to have priorities,” he said.

Heard Runs: While pointing out other political candidates in the room, Carter mentioned former Athens state Rep. Keith Heard, who later confirmed that he will run for state insurance commissioner. “Georgia has a lot of opportunities, and we’re missing those opportunities playing politics with the lives of the citizens of Georgia,” Heard said.

Incumbent Ralph Hudgens—who has proudly claimed to be “obstructing” the Affordable Care Act—is doing constituents a disservice by not helping them navigate the law or answering their questions about it, Heard said. “We don’t get to choose which laws we abide by and which ones we don’t,” he said.

Heard has been in the insurance business for 36 years and served 20 years in the legislature until Spencer Frye ousted him in 2012.

But Denson’s support may not be as strong as she’d like you to believe. For instance, Commissioner Jerry NeSmith said he felt like he had to make a choice, but if someone better comes along, he’d consider switching his allegiance.

The list is at least one name shorter than it was a few days ago, too. It initially included Clarke County School Superintendent Philip Lanoue, which I thought was odd, since ACC has a policy limiting employees’ involvement in local campaigns, and I assumed CCSD had one as well. District spokeswoman Anisa Sullivan Jimenez said that Lanoue had merely provided a statement about Denson’s support for local schools, not an endorsement, and the quote was removed from the website.

Incidentally, Denson, who has reportedly been soliciting support from county employees, thinks any restrictions on ACC employees’ political activities violates the First Amendment. “You can’t take people’s constitutional rights away from them,” she said.

Fair point, but the rules are there for a reason. Although the mayor doesn’t have hiring and firing power, county employees could easily feel intimidated into supporting the incumbent.

Cyclist Killed: Tobias Smith, 19, was hit by a car and killed as he rode his bike on Winterville Road the evening of Feb. 22. It’s tragic when anyone that young loses his life, but even more so when it happens in a manner that could have been avoided and elicits so much public debate. (Please see the Comment on p. 7 for more.)

Police said that Smith’s bike had no lights and no reflectors, so the car’s driver (who has not been charged with crime) could not swerve in time to keep from hitting him—something that people in the biking community who knew Smith well dispute. A manager for the BikeAthens bike recycling program inspected Smith’s bike after the wreck, and it did have reflectors on the pedals, reflective stickers, a front light and a mount for a rear light, according to Executive Director Tyler Dewey.

For years, local cyclists have been pushing to make Athens roads safer. Winterville Road has no bike lanes—not even a shoulder that could have allowed Smith to avoid the car bearing down on him. To their credit, both Athens-Clarke County and the state Department of Transportation have Complete Streets policies. Let’s use them.

In the meantime, Sunshine Cycles, where Smith worked, is accepting donations for his family and a scholarship fund in his name. Email Jimmy Marbut at marbut4@msn.com for details.