Stonewalled on the Future of the Lyndon House 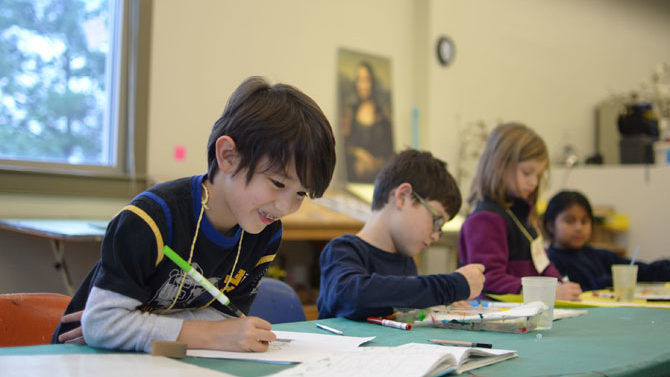 Dozens of people crowded into the lab at Ciné to press Athens-Clarke County officials on the future of the Lyndon House Arts Center at a Federation of Neighborhoods forum Monday, Feb. 3. They left with scarcely more answers than they brought.

Lots of rumors have been going around about Reidy’s plans for the Lyndon House, but she and ACC Manager Alan Reddish did little to dispel most of them. “We will be moving forward in answering those four questions,” Reidy said in response to one question from the audience.

Will artists be involved in decision-making? “When we get to the point where we answer those four questions, their opinions will be asked” at public forums, on social media and through mail and telephone surveys, she said.

Will art groups still be able to use the Lyndon House for free if it’s being rented out for weddings and meetings? “The fact of the matter is, I don’t have those answers for you because we haven’t answered those four questions for the Lyndon House,” she said.

The department is dealing with budget cuts by trying to recoup more of the costs of providing programming for adults while preserving programs for children, Reddish said. $240,000 in fees went uncollected last year because of the scholarship program for low-income families, he said. “I point that out, because many times that’s a clientele that doesn’t have a very loud voice in this community, but it is a clientele that needs to be served,” he said.

Reddish did specifically deny that officials are considering moving any government employees other than the Leisure Services facilities supervisor into the Lyndon House. “Some rumor that we’re bringing in someone from public works or wherever is absolutely unfounded,” he said.

Reddish and Reidy ended the forum by chiding attendees for focusing on the negative and believing rumors they hear rather than seeking answers directly from the source. “Build a relationship with me,” Reidy said. “Pick up the phone. Call me. Email me. Take me out for coffee. Take me out for lunch.”

Dan Hope—a longtime parks and recreation official who is critical of the department—said he’s been asking questions for years and gotten no answers. The local government’s attitude is: “Pretend you’re listening to citizens but ignore them, because they’ll get tired and stop bothering us,” he said.

Another community meeting on the Lyndon House is scheduled for 5:30 p.m. Tuesday, Feb. 18, also at Ciné.

Mayor McMoneybags: Mayor Nancy Denson raised $28,356 last month for her re-election campaign, bringing her total to $45,971. She had $35,055 cash on hand as of Jan. 31, according to a report filed Feb. 7 with the Athens-Clarke County Board of Elections.

Nancy Denson’s only opponent, Tim Denson, reported raising $1,620 in January and has $1,975 on hand. He received $250 each from retired lawyer and author Grady Thrasher, artist Kathy Prescott and homebuilder Michael Songster and $150 from University of Georgia professor and immigration activist Pamela Voekel.

Campus Carry: The guns-on-campus bill is back and loaded for bear. House Bill 875, which sailed through committee last week, wouldn’t let permit-holders holster their concealed handguns in study hall—but it would reduce the penalty to a mere $100 ticket. Not only that, the bill would legalize guns in bars, churches and government buildings like libraries and city halls (though not the state capitol). Zoning spats might get a lot more interesting.

Aussie Aussie Aussie! Oi Oi Oi!: The Athens-Clarke County Commission approved an agreement Tuesday, Feb. 4 with the Australian city of Geelong that could bring down-under biotech companies to Athens. Geelong, located in southeastern Australia, is similar in size to Athens and also has a university, manufacturing plants and a growing life sciences industry. “They are trying to reinvent themselves as a life sciences/biotech community,” Commissioner Andy Herod said.

The memorandum of understanding will open the door for Australia-based biotech companies to expand to the U.S., Herod said. “I feel like if we have a relationship with Geelong, they might choose Athens to get their feet wet,” he said.

Officials are concerned about spotty broadband downtown and believe it could be an impediment to enticing tech companies. The Athens Downtown Development Authority met with local Internet service providers a few months ago, but apparently none of them are interested in upgrading, even though ACC is leaving space for new fiber optics underground as part of the Clayton Street streetscape project and tried to get companies to lay new lines while the street is torn up.

Girtz also said he’s interested in a municipal electric utility that would focus on sustainable energy sources like solar and clean-burning methane from the county landfill. Customer-owned EMCs are nothing new; Jackson and Walton counties both have one, as do many other cities and counties throughout the state.

New Laws: The commission also gave final approval to a law allowing community gardens in residential neighborhoods, where they were previously banned because they were considered agriculture. Neighborhood residents can now cooperatively start gardens up to one acre in size on vacant land with the property owner’s permission and a permit from the ACC Planning Department.

Another law passed last week requires planners to hold a public hearing early on in the process of creating a new historic district, in response to all the misinformation floating around during the Buena Vista debate last year. And neighbors within 400 feet will be notified by letter whenever a historic building is about to be torn down.

UGA Hazing: Eleven members of UGA’s Kappa Alpha Psi fraternity were charged with hazing Thursday, Feb. 6 stemming from a pledge event Jan. 27 and 28, according to University of Georgia police. According to their arrest warrants, members lined up pledges shoulder-to-shoulder against a wall and punched and slapped them in the stomach or allowed others to punch and slap the pledges.

Say What?: Tenth District U.S. Rep. Paul Broun, from Athens, is only the 196th most conservative House member out of 435, according to the political magazine National Journal. That’s the lowest ranking of any Republican member of Georgia’s delegation. Ninth District Rep. Doug Collins, from Gainesville, is the most conservative, ranking 16th. First District Rep. Jack Kingston, Savannah, is 17th and Eleventh District Rep. Phil Gingrey, Marietta, is 23rd. Like Broun, Gingrey and Kingston are running for Senate.

Something seems fishy about these rankings. One theory is that the magazine filed under “liberal” all the things Broun voted against because he thought they weren’t conservative enough.

Oconee County Observations: With the OC woefully underserved by the news media—the Enterprise barely has a website, the Banner-Herald rarely covers it anymore and Oconee Patch is now managed out of Atlanta—it’s time for Flagpole to start paying more attention to the OC. We’re joined at the hip. Stories like the current debate over legalizing liquor by the drink and Atlanta Highway retailers moving to Epps Bridge Centre affect Athens residents, too.

And so we are proud to welcome Lee Becker into the fold. The University of Georgia professor has four decades of experience as a journalist and academic and covers Oconee civic affairs in greater depth than anyone else. Starting this week, we’ll be running excerpts from his blog, Oconee County Observations, in print and online. Check it out.