The Next Mayor Has His or Her Work Cut Out 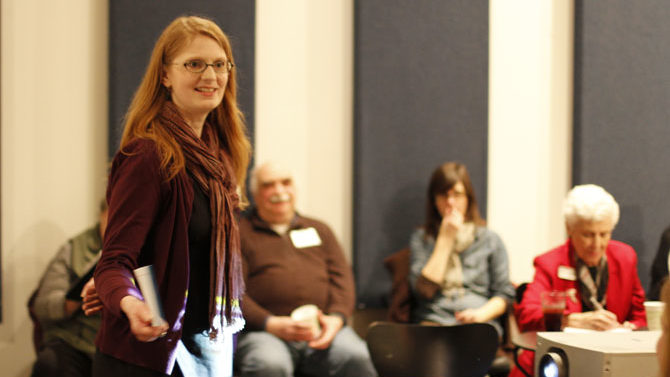 Once upon a time, neighborhoods had power. Neighborhood associations served as farm teams for the Athens-Clarke County Commission, and neighborhood activists would come out to meetings in droves to lobby on the issues that affected them, primarily development and smart growth. They used to be “a political force,” said Commissioner Doug Lowry, himself a former Federation of Neighborhoods president. “I liked that. The neighborhoods need a voice.”

Those days have been waning. FON meetings now draw maybe a dozen people, mainly from still-active Cobbham and Boulevard. East Athens, the Eastside and the subdivisions on the west side are missing in action. But the FON is reorganizing and committing to become a powerful voice in local politics again.

The FON’s Monday, Jan. 13 meeting drew more than 100 people, a much larger and more diverse crowd than usual. “This is usually an all-Boulevard meeting, and it ain’t tonight,” board member Rick Kopp said.

Wendy Moore, the new head of the federation’s government committee, opened up the floor for griping about the local government. Much of it was things we’ve been talking about as a community for years or even decades, which just goes to show how difficult it’s been for the mayor and commissioners to wrap their arms around our problems. Some of the complaints:

• Codes aren’t enforced against fraternities, students living in rental houses or the “slumlords” who own them.

• Overdevelopment, especially downtown, and too much student housing. The government is reacting to developments, not going out and attracting what we want.

• Not enough sidewalks or crosswalks, and students who don’t know how to use them.

• The University of Georgia’s tax-free status, low wages and use of temporary workers to avoid paying full-time benefits.

• The Prince Avenue corridor study seems to have vanished into the ether.

• Crime and congestion in the gentrifying Hancock Corridor area.

• People who aren’t affiliated with UGA are afraid to go on campus.

• Lack of affordable housing—working-class people are being priced out of intown neighborhoods.

• Slow progress on the greenway.

• No bike access from the outskirts of town to downtown, and the need for bike safety initiatives.

Mayor Nancy Denson, several commissioners and all the candidates were there taking notes. Maybe, someday, some of them will follow through.

“Athens deserves a bold vision for progress that benefits the entire community, not just the well-connected and well-off,” he said.

Link’s platform—like Denson, she worked with Occupy Athens to oppose the Selig development—has a similar 99 percent-ish tone. “[I]t’s not secret that I am very unhappy with the direction our government is heading as of late,” she said. “I feel we’ve sacrificed our progressive principles for a nod-and-smile, go-along-get-along form of government that favors outside interests and the whims of a wealthy few over the needs and wants of the diverse, everyday people who define our community.”

Mosey on over to melissalinkathens.com to click through the whole thing. Also, FYI, she’s holding a fundraiser from 4–7 p.m. Sunday, Jan. 26 at The World Famous.

The Mayor’s Moolah: Speaking of fundraising, last week, Tim Denson supporters flocked to the flagpole.com comments to lambast me for saying he couldn’t beat Mayor Nancy Denson. To paraphrase briefly: We are changing politics, and money doesn’t matter.

That would be nice, but in the system we have now, money does matters. We’re not talking Citizens United money here—Karl Rove isn’t going to swoop down and write Nancy a $10 million check—but the $50,000 it takes to run a credible mayoral campaign in a city of 120,000 people. (Tim had raised $504 as of Dec. 31.) Progressive former mayors Heidi Davison and Gwen O’Looney both raised that much without morphing into corporate stooges. Like it or not, candidates need money for ads and bumper stickers and such. Volunteers are essential, but as far as grassroots goes, Nancy  is out there shaking hands at community events every day, and no one works harder at retail politics than she does.

If not, that’s OK—politics is a long con, and even if Tim doesn’t win, he can get his ideas out there, possibly push Nancy to the left and run again someday. Hey, in all likelihood, my previous column will boost donations to Tim, in which case, forget I said anything. If a bigger name doesn’t step up to run and progressives who are sitting on the sideline coalesce behind Tim, maybe he has a chance. Who knows? After all, reporters (including me) initially dismissed Paul Broun. My comment that “Tim ain’t going to beat Nancy” was a smart-alecky way of saying he’s a longshot.

Media Matters: Athens Banner-Herald publisher Scot Morrissey buried the lede, as we say in the business.

A column in Sunday’s ABH under Morrissey’s byline detailed plans for a listing-filled Monday edition (translation: We don’t have enough staff to produce enough content to fill up the paper anymore), a section dedicated to law enforcement and an online deals program (translation: We know people only read us for the police blotter and the coupons). It wasn’t until the ninth paragraph that he mentioned: “Among the changes is the end of free and unfettered access to OnlineAthens.com and our apps.”

In other words, a paywall.

Daily newspapers made a huge mistake, in retrospect, by putting their stories on the web for free, never realizing 15–20 years ago that they’d be competing with their own print editions for eyeballs and with Facebook and Google for advertising revenue. But in recent years, many papers, from the New York Times to the Atlanta Journal Constitution to the ABH‘s Morris-owned sister papers like the Augusta Chronicle, have begun charging for online access with varying degrees of success. The question is whether the greatly diminished ABH is worth paying for—my guess is many online readers will say no.

Minority Teachers: The Athens chapter of the NAACP is threatening a lawsuit if the Clarke County School District doesn’t hire more minority teachers. Education committee chairwoman Tommie Farmer says that less than 25 percent of the district’s teachers are African American, while 52 percent of students are African American and 80 percent are non-white. Those students “should see more teachers representative of their culture and ethnicity,” Farmer says.

Ciné Director: The Athens Film Arts Institute (the nonprofit that runs Ciné) has hired Pamela Kohn as its new executive director, replacing Gabe Wardell, who left last month. Kohn was previously in charge of the Robert Osborne Classic Film Festival and worked as an independent film and television producer and and a fundraiser at UGA.

“Pam Kohn has an impressive background and set of skills that allow her build on Ciné’s successful history and its vital mission of bringing the best in world cinema to Athens,” AFAI board co-president Richard Neupert said in a news release. “She also plans to engage fully with various groups across the Athens community and sponsor an important array of special film premieres and mini-festivals.” 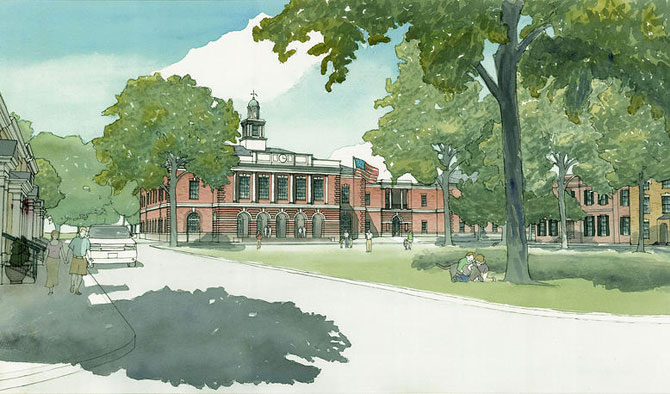 A proposed new City Hall and village green in Watkinsville.

Watkinsville Plan: Athens is closing in on a downtown master plan, and Watkinsville might have one, too. Robert Smith wants to bring New Urbanism to auto-centric Oconee County.

Smith (an Atlanta architect, Watkinsville native and the son of former state Rep. Bob Smith, not the Cure singer) has a plan to redevelop downtown Watkinsville to include a civic green between the county courthouse and a new municipal building. The green, which would function as an elongated town square, will spur infill development on the surrounding streets, he says, and ensure Watkinsville remains a traditional small town, pedestrian friendly, with a mix of uses in a continuous stretch of small buildings close to the street—in contrast to the uninviting sprawl of Epps Bridge Parkway.

Intrigued? Smith will give a presentation at 6 p.m. Wednesday, Jan. 22 at the Watkinsville Community Center on VFW Drive. Or check out watkinsvilleplan.wix.com/home.