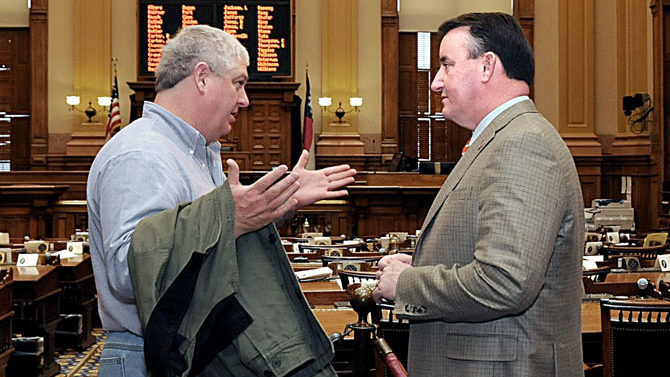 Well, so much for that idea.

Athens-Clarke commissioners were hoping for permission from our overlords in Atlanta to hold a referendum on a fraction-of-a-penny sales tax hike to fund transportation improvements and Athens Transit, which is facing the prospect of more service cuts and/or another fare increase.

“I guess I’ll be the one crazy enough to ask a table full of Republicans to look at this,” Commissioner Mike Hamby said at a meeting between legislators and commissioners Tuesday, Nov. 12

State Sen. Bill Cowsert (R-Athens) wasted no time in shutting them down, doing his best George H.W. Bush impression. “I can answer you in three words,” he said. “No new taxes.”

Cowsert said he would not support a bill specific to Clarke County, effectively killing the idea, since local legislation requires unanimity among our legislative delegation. And he predicted that a statewide bill would go nowhere.

As Hamby and Commissioner Andy Herod pointed out, Cowsert and other Republican legislators put T-SPLOST on the ballot last year—a very similar proposal except on a regional level. Voters in Athens supported T-SPLOST, although it failed because other counties in the region rejected it.

Cowsert was unswayed. “I cannot be any simpler,” he said. “I will not support any tax increase.”

State law caps sales taxes at 7 percent. Of course, commissioners could always raise property taxes, but they’d prefer if visitors and tax-exempt entities share the burden. It’s ridiculous that we can’t decide for ourselves how and how much we want to be taxed because Republicans are scared of their own right-wing base.

There were other examples of how lawmakers in Atlanta control us on the local level. After pushing through a new commission district map last year that we didn’t want, the delegation expressed a willingness to put the old structure (eight districts and two superdistricts) up for a vote, but they would not put local officials’ preferred map on the ballot.

They also wouldn’t push to move nonpartisan local elections from the primary in May to November, when more people vote. It’s too hard—the Augusta delegation is blocking it, they said.

Commissioners asked that police be allowed to run radar on neighborhood streets. “We’re having a very hard time enforcing speed limits in residential neighborhoods, and there is a lot of concern,” Commissioner Jared Bailey said.

Legislators balked at that, too. Sen. Frank Ginn (R-Danielsville) said he’d only heard about the issue of neighborhood speeding in Athens and wouldn’t back such a bill unless he heard from other communities.

Then Ginn argued with ACC officials about whether the state should pay local governments more to house state prisoners in local jails. Currently it only pays $20 a day, less than half the cost of housing them; commissioners want it raised to $25. Calling those prisoners “prize fish” (what?) who have skills like carpentry (really?), Ginn said that ACC should recoup its costs by putting them to work.

While the county does send some prisoners out on work detail—painting, cleaning, mowing grass, etc.—ACC Manager Alan Reddish replied that many of them are hardened criminals who don’t belong out in public, and they don’t have many skills, besides. After all, they became criminals for a reason.

HUD Lays Down the Hammer: A recent presentation to the commission by new ACC Housing and Community Development interim director Rob Trevena may have shed some light on why former director Keith McNeely abruptly turned in his resignation last month.

A routine review in June by the U.S. Department of Housing and Urban Development—whose grants provide the funding for HCD’s affordable housing and social services programs—turned up six “findings,” or instances where HCD did not follow HUD rules. As ACC Manager Alan Reddish pointed out, “you’re always going to have findings,” but it would certainly explain what happened with the change in leadership at the department.

Four of the findings have been corrected, and one is expected to be resolved shortly, according to Trevena, but one is still outstanding. That one is related to the East Athens Community Development Corp., a nonprofit that had its funding pulled by the commission for poor performance, but was inexplicably recommended for funding under McNeely in subsequent years. EADC built a subsidized house on Vine Street but did not sell it to a qualified buyer within 120 days and now owes the federal government $25,906.40, and there is a chance ACC taxpayers may have to pick up the tab.

Get That Dirt Off Your Sidewalks: Last week’s City Dope included an item about ACC testing a new sidewalk-cleaning system that sucks up the grimy water so it doesn’t run off into the river. Athens Downtown Development Authority Executive Director Pamela Thompson has applied for an environmental grant from Wells Fargo to cover the “low six figure” cost of buying the equipment.

In other downtown news, most of the new parking meters purchased with SPLOST money earlier this have been installed, Thompson told the ADDA board Tuesday, Nov. 12. The new individual meters are replacing many of the much-loathed pay-and-display meters, as well as older, broken meters, and accept bills and credit and debit cards as well as coins.

And one more thing: UGA College of Environment and Design professor Jack Crowley will present the final draft of the downtown master plan to the ADDA at its Tuesday, Dec. 10 meeting.

Broun Roundup: Everyone’s favorite congressman, Paul Broun (R-Athens), is holding his first town hall meeting in Athens in several years at 9 a.m. Friday, Nov. 22 at the Athens Area Chamber of Commerce. He promises “a free cup of coffee and an open discussion about national politics and current events.”

Rail-Trail: The long-awaited Georgia Railroad rails-to-trails project from downtown to Old Winterville Road is making progress, albeit about as quickly as one of those old-fashioned handcars. ACC Greenway Coordinator Mel Cochran told commissioners last week that she anticipates construction starting next fall. And, yes, the county is still planning on using a series of switchbacks down into Dudley Park and back up to bypass the crumbling Murmur Trestle.