Fewer Sidewalks, But At Least They’ll Be Clean 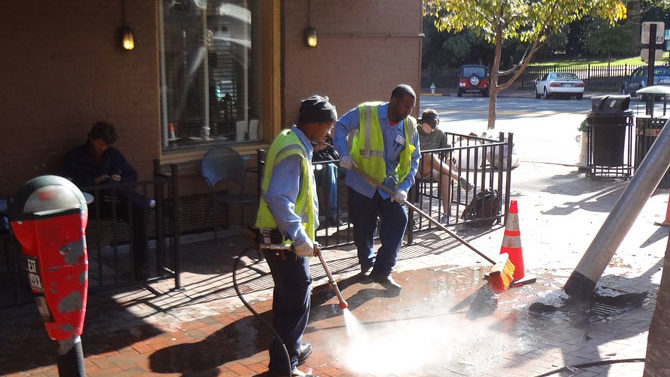 Rather than run off into the gutter and then to the river, though, all the filth was sucked up by a vacuum truck waiting by a storm drain. ACC and the Athens Downtown Development Authority are experimenting with new equipment that could finally be a solution to downtown’s notoriously noxious sidewalks.

“It’s definitely an improvement,” ADDA Executive Director Pamela Thompson said. “The water coming off it is super icky. It may take more than one swipe to get it super clean.”

There may be fewer sidewalks to keep clean in the future, though. Curiously, our supposedly progressive commission voted 9-1, with Jared Bailey dissenting, to lift a requirement that developers build sidewalks in front of new factories in industrial zones, a decision that was based on a recommendation from the businesspeople on Mayor Nancy Denson’s economic development task force. They did not see the logic in forcing Caterpillar to build a sidewalk along the long access road through its site, according to Commissioner Andy Herod.

Alternative transportation advocates told the commission that the decision could make it harder for employees to walk to work or from their homes through industrial areas. “We want to make Athens a more bike- and walk-friendly place,” BikeAthens Chairman Elliott Caldwell said. “Lifting this requirement and allowing businesses not to put in sidewalks takes us further away from that goal.”

For years, developers have been trying to avoid building sidewalks, Bailey said. “I think we’d be losing ground in our attempt to be a more walkable city,” he said.

Sidewalks will still be required in industrial zones that are within 500 yards of residential neighborhoods, including most of the Newton Bridge Road area and part of Olympic Drive, Commissioner Kelly Girtz said.

“I think this is a reasonable balance,” Herod said.

Magnet for the Poor: Denson bragged on Caterpillar, wept over losing Selig and said she will run for re-election on bringing business to Athens at a Federation of Neighborhoods meeting Monday, Nov. 4.

Several people asked about Athens’ high poverty rate. Denson said “Athens is a magnet” for poor people who come here “because they know they can get help.”

“We bring people out of poverty all the time” she said, but more come to fill their places. And the new Caterpillar plant will be “life-changing for families” who can “buy homes to have a life they never dreamed of having.”

“It’s very sad for all of us” to lose Selig, she said, but “I have high hopes that we’re going to get something as good or better” and we have “already gone through most of the pain” of vetting the requirements, so that should make it easier next time. [John Huie]

Maxwell quoted (believe it or not) Kenny Rogers before announcing at the end of the Tuesday, Nov. 5 commission meeting that he won’t seek a fourth term. “I have been asked by many people,” he said. “I thought about it. I prayed about it. My prayers were answered—‘no.’”

Maxwell, 75, has been a preacher, mailman and the third black police officer in Athens. He ousted Alvin Sheats in 2002, primarily because Sheats never met a rezoning he didn’t like, and became an eloquent and respected spokesman for the Hancock Corridor and the poor across Athens, on the rare occasions that he chimed in.

His politics shifted somewhat after Republicans’ 2012 redistricting handed him the largely white, progressive neighborhoods along Prince Avenue. By and large, his new constituents are happy with his representation, but he still cited redistricting as a factor in his decision, along with age. “It’s not the same as when the district was like it was,” he said.

As Maxwell himself would put it, many of his constituents are (baritone voice) “deeply disturbed.” No one had stepped up to run at press time, but undoubtably there will be great interest in the seat.

After 18 years in office—three terms on the Athens City Council and three on the Athens-Clarke County Commission—Kathy Hoard also has decided not to seek re-election next year.

“It has been a tremendous honor to serve our community in this manner, but I am looking forward to other engaged individuals stepping forward expressing interest in the post I currently hold,” Hoard said via email.

Lo and behold, just a few days later, a message from a representative of Diane Bell popped up in the ol’ inbox announcing her candidacy for Hoard’s District 7 seat. Bell is a very well qualified candidate: She has served on SPLOST committees for 15 years, owns A Flair With Hair and is president of the Five Points Business Association. But don’t expect her to be a shoo-in. Others will be eyeing this seat as well.

In a statement to Flagpole, posted in full here, Hoard reflected on her time in public service. She has worked to preserve our city’s water supply and historic resources, chairing a water conservation committee during the recent horrific droughts and leading efforts to protect South Milledge Avenue and reform the historic district designation process. Just last week, she and Commissioner Mike Hamby pushed through a moratorium on demolitions on West Cloverhurst. Still left undone, though, is strengthening the demolition delay ordinance, which, as Hoard noted, has yet to save one historic building.

But most of all, I’ll miss Hoard’s quick wit. Anytime anyone goes on too long in a meeting or just isn’t making any sense—which is a lot—Hoard has been there to cut them down with a dose of sarcastic Southern sweetness. Bless her heart.