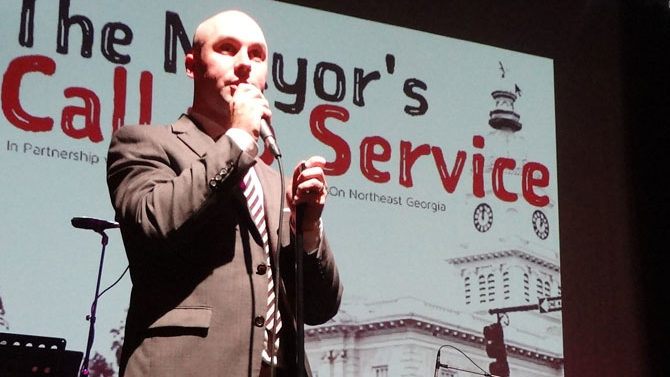 Mayor Nancy Denson recently launched the Mayor’s Call to Service, an effort to recruit volunteers for local nonprofits that could also end up boosting her chances of re-election.

Denson tapped Tommy Valentine to lead the effort after a breakfast meeting. Best known as a rapper, Valentine managed Bobby Saxon’s losing 2008 congressional campaign and is now enrolled in the Masters of Public Administration program at the University of Georgia.

Denson was inspired by, of all things, conversations with Occupy Athens, according to Valentine. “Who knew?” said occupier Chris Dowd, who was passing out leaflets that listed accomplishments like calling attention to Denson’s “illegal meetings that nearly brought a Walmart to our downtown” and stopping her proposed curfew law that “would have restricted freedom of assembly and potentially the rights of the homeless,” as well as advertising a Nov. 15 “unity march.”

The Monday, Oct. 11 kickoff event was held at the Georgia Theatre for a reason. A recent volunteer fair at UGA drew 1,000 people, “which is amazing, it’s great, but there are some people who won’t go on campus, whether it’s [because of] parking or whatever else,” said Fenwick Broyard, executive director of Community Connection. That organization’s Hands on Northeast Georgia program, a clearinghouse that matches up volunteers and nonprofits, is the entry point for people who answer the call to service.

More than 30 nonprofits set up tables at the fair. A few hundred people showed up, although it’s hard to say how many were looking for volunteer opportunities and how many were representing an agency. There were more unfamiliar faces than usual at a charity event, and that’s what organizers are shooting for.

Each week, Denson will tape two videos, one highlighting an agency and the other a volunteer, that will be distributed through social media. (To be fair, Habitat for Humanity director, one-time mayoral candidate and now state Rep. Spencer Frye had the idea first.)

Denson’s nearly three-year tenure as mayor has been almost completely devoid of new ideas. Her one big policy initiative, a property tax freeze for seniors, fell flat on its face once commissioners realized how much revenue the government would lose in an era of cuts, cuts and more cuts. While it doesn’t really qualify as new—or a policy initiative, for that matter—at least the call to service is doing something.

Denson has operated behind the scenes, but now she’s ready to step to the front of the stage, Valentine said. “This was really her way of using the bully pulpit for the first time,” he said.

Not to be overly cynical (OK, I’m cynical about things like this), but it’s worth noting that Denson also formally launched her re-election bid earlier this month. Although one thing has nothing to do with the other, of course, with all the social workers in this town—many of whom undoubtedly supported one of their own, Gwen O’Looney, in 2010—getting them on her side can’t hurt her campaign.

That said, there’s never anything wrong with encouraging volunteerism. I remember Mayor Heidi Davison getting mad at me for suggesting the OneAthens anti-poverty initiative was good politics and would help her win a second term. It did, and that doesn’t change the fact that it also did a lot of good by focusing the public and our local institutions, like UGA and the school district, on the issue. We’ll see if the same applies to the Mayor’s Call to Service.

Roller Derby: It looks like the Athens-Clarke County Commission’s recent decision to let Paul Cramer spend $5.4 million on bleachers, a scoreboard, etc. to temporarily turn the Classic Center’s exhibit hall into an arena is paying off. The Classic City Rollergirls will move from Athens Arena to the Classic Center when their new season starts in January.

“We are excited to offer our fans the comforts of the Classic Center and all of the attractions of downtown on bout day,” Rollergirls skater and league president Stevie Hretz said.

Millworks: In saying that he will vote to approve plans to convert the abandoned Southern Mill into a complex of apartments and artists’ studios called Millworks, Commissioner George Maxwell expressed surprise that the majority of Boulevard residents are in favor of it.

“Usually, people in the Boulevard district don’t want this kind of thing, so if they’re in favor of it, it must turn out to be something good,” he said.

The vote is scheduled for Tuesday, Nov. 5

Flagpole Frat House: Commissioners also indicated at the agenda-setting meeting that they will approve a special use permit for Sigma Chi to take over the Sniff family-owned Foundry Street building that houses your favorite newspaper’s office.

The site, they said, is far better than one on North Milledge Avenue that drew opposition from Cobbhamites (Cobbhamians? Cobbhamese?) because it’s close to campus and not near a residential neighborhood. “This, to me, is the greatest thing that could possibly happen to the Milledge Avenue site, as well as this particular piece of property,” Commissioner Harry Sims said. (Thanks, Harry!)

“It has always been my preference that fraternities remain on campus, but really, this is the next best thing,” Commissioner Kelly Girtz said.

Not that they’re wrong—it’s objectively a much better place for a frat house than the middle of Cobbham—but isn’t it kind of symbolic? Affluent students taking over downtown from the townies, and a fraternity displacing the colorbearer of Athens in the process. Just sayin’.

See Athens Rising for more info. Oh, and before you ask, no, we don’t know where we’re moving yet.

Media Matters: The Athens Banner-Herald, where a number of key employees are leaving for the nth time, isn’t the only struggling local media outlet. AOL’s hyperlocal news division Patch laid off 300 editors nationwide, including all Patch sites in South Carolina, effective last week. Many of the remaining editors are pulling double duty, while some sites are completely unstaffed (leading to some hilarity, like a posted photo of a pumpkin carved into the shape of two people, um, trick-or-treating, let’s call it, on the hood of a car). Locally, Patch Editor Rebecca McCarthy was spared, although she’s now in charge of the Oconee Patch site as well as Athens’.