Who Will Run Against Mayor Nancy Denson? 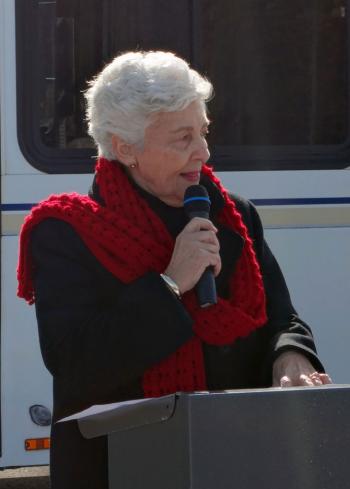 Mayor Nancy Denson bundles up to kick off her re-election campaign by performing in Broadway on Ice at the Classic Center.

No one, so far, and it’s getting late.

Mayor Nancy Denson officially launched her re-election bid Sunday, Sept. 29 with a reception at her house in Forest Heights. The media was not invited to this event, so I have nothing to report, other than people who were there say attendance was good.

With the election only seven months away—remember, it’s likely to be moved up to May 20 due to a court order—no one has publicly stepped forward to run against Denson. Commissioners Kelly Girtz and Mike Hamby, two oft-mentioned potential candidates who backed Gwen O’Looney in 2010, have opted to get along with Denson rather than try to oust her. Another 2010 candidate, Spencer Frye, is now a promising state legislator. Former congressional candidate and Walmart crusader Russell Edwards isn’t running. Some folks have been trying to recruit former mayor Heidi Davison, but she hasn’t committed. Other than that, the rumor mill isn’t really spinning much.

Denson would be tough to beat. She won in a landslide three years ago, she’s running on a jobs platform, and now she has Caterpillar under her belt, though it’s arguable how much credit she actually deserves. Unlike Doc Eldridge when Heidi beat him in 2002, Nancy has managed to avoid a mass uprising, although she’s done lots of little things to irk progressives.

Still, it can be done. Somebody needs to step up, if only to raise issues and give people a choice. No politician should ever run unopposed.

Plus, it’ll be fun! Come on, people. Help me out here. Don’t make this job any more boring than it already is.

A month after voting against bleachers, a scoreboard, ice-making equipment and additional parking at the Classic Center, NeSmith and commissioners Jared Bailey and Allison Wright last week tried to cut a $5.4 million bond issue for the project. Will it ever stop? Yo, I don’t know.

NeSmith said the Classic Center has a raised floor that may not be able to hold the weight of the ice. Commissioner Andy Herod ran a quick Google search and waxed a chump like a candle, informing everyone that it is possible to turn a raised floor into an ice rink. “I’m no engineer, but I do know how to use the Internet,” he said.

Then Cramer rocked the mic like a vandal, telling the commission that the floor isn’t raised, it’s a slab of poured concrete.

NeSmith also said he doubts that the Classic Center can draw big-time ice shows. To which Cramer replied, “We have got an excellent track record of attracting major shows to this community that no one thought we could.” Anything less than the best is a felony.

“It’s our vision that this will not only be a workforce housing development, but something that can serve as a center for the arts and the procurement of arts in this area,” said Scott Haines of Williams and Associates, the project’s architects.

A few residents worried that Millworks would clash with industries in the area, but Boulevard Neighborhood Association President Dan Lorentz and others pointed out that this is exactly the type of development many of us want in Athens. The planning commission agreed, unanimously recommending approval.

Office Search: Pete will keep you posted on our new digs, but Sigma Chi cleared a key hurdle last week when it won planning commission approval to turn Flagpole‘s office and the apartments upstairs, and the vacant building next door into a fraternity house. Sigma Chi still needs approval from the Historic Preservation Commission Wednesday, Oct. 16 and the county commission Tuesday, Nov. 5.

Four under 40: Georgia Trend released its 2013 “Forty Under Forty” list last week, and Athens is well represented. (They missed a certain alternative weekly editor, though.) The list includes Matt Bishop, 38, the director of UGA’s Fanning Institute; April Ingle, 39, the executive director of the Georgia River Network; and Eric NeSmith, 33, a vice president at his father Dink’s company, Community Newspapers Inc.

Another name might be familiar to local political junkies with long memories: Blake Tillery. As a UGA undergraduate, he ran against Alice Kinman for an open commission seat in 2004 and narrowly lost. He is now a lawyer and chairman of the Toombs County Commission. Looks like Kinman taught him a thing or two, in addition to English.

Hogwash: Speaking of Ingle, the Georgia Water Coalition sent out an alert calling new state Department of Natural Resources regulations, literally, hogwash. DNR is considering raising the threshold where safeguards kick in from 7,500 to 12,500 hogs.

If that doesn’t sound like much of a problem—we all poop, after all—consider that a hog produces up to four times the No. 2 of a person, and that it’s collected in lagoons rather than treated, as human waste is. In North Carolina, where industrial-style hog farming is legal, flooding from a 1999 hurricane dumped millions of gallons of liquid manure into the state’s water supply.

The Georgia Environmental Protection Division is only taking public comment at one meeting, in Atlanta, on a weekday, but comments can still be emailed to EPDComments@dnr.state.ga.us through Monday, Oct. 28. Email ingle@garivers.org for a sample letter.

More Water News: State and local officials, including Gov. Nathan Deal, officially broke ground Friday, Oct. 4, on the Hard Labor Creek reservoir on the Walton-Oconee County line. Flagpole ran a story in August 2012, based on a report by the environmental group American Rivers, on the ballooning $350 million price tag for the reservoir and the environmental risk involved. It also showed that the reservoir may not be needed, because population growth estimates were far too optimistic.