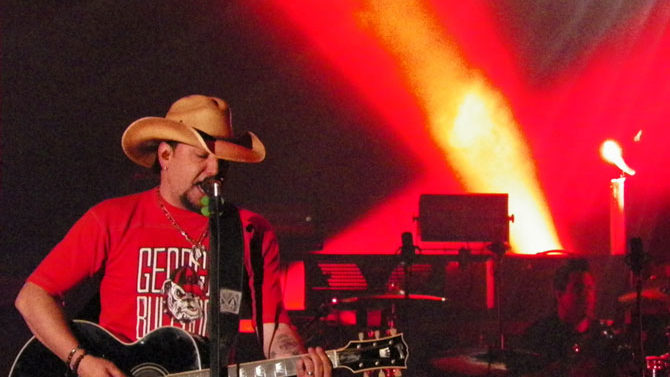 The Aldeanocalypse: On Apr. 13, Athens residents cowered in their homes, fearful of the giant, radioactive, Canadian tuxedo-clad cowboy who was coming to stomp all over our football stadium, clog up our roads and take all our parking spaces. There was much rending of garments and posting of Facebook statuses. Who is this guy? Why didn’t they get R.E.M.? (Hint: because they’re broken up.)

Jason Aldean isn’t my particular cup of Coors Light. To me, “Night Train” is a James Brown song, and country music ceased to exist after Gram Parsons died. But there is a time and a place for judging people by their taste in music, and it’s called high school.

Aldean and pals sold out Sanford Stadium in an hour. How many acts can move 66,000 tickets, let alone that fast? Somebody out there must like them. Even Flagpole‘s (other) resident curmudgeon, Threats & Promises writer Gordon Lamb, had a good time.

Dire predictions of rednecks overrunning West Washington Street didn’t come to pass. Sunday’s police blotter told the story of nothing more than a run-of-the-mill classy Athens weekend. An overindulging gentleman taken to the hospital. A couple of fistfights. Two teenagers peeing in a parking deck.

“I have to say, it was wonderfully behaved crowd,” said University of Georgia President Michael Adams, who attended the concert. “Probably better behaved than a typical football crowd.”

Parking and traffic weren’t great, of course, but not any worse and probably better than a football game. Assistant Athletic Director Josh Brooks, who organized the event, said he didn’t field any complaints. Nor did Athens Downtown Development Director Kathryn Lookofsky.

“The bars and restaurants had a gangbusters weekend,” Lookofsky said, a welcome shot in the arm during the slow time between football season and Twilight, graduation and AthFest.

When I spoke to Brooks last week, he was too exhausted to even contemplate putting on another concert at Sanford. A few days later, incoming UGA President Jere Morehead wasn’t ready to commit to one—planning it would take a year or two, he said—but nothing happened that would rule one out. “I am certainly open to replicating this in the future,” Morehead said.

To me, it’s a no-brainer. We have a taxpayer-funded facility that sits empty 357 days out of the year. Tourism is one of the backbones of our local economy. And if twangy Metallica covers are what the kids want to pay money to hear these days, so be it.

But Wait! There’s More: Adams had a lot to say during his monthly press conference last Thursday, weighing in on coal, a recent tuition hike, next year’s budget, security in the wake of the Boston Marathon bombing and rumors that the UGA-Georgia Tech football game would be canceled. Read it here.

Landmark Tree: The owners of one of Athens’ most famous trees cut it down earlier this week after the Athens-Clarke County community forester noticed it was dying.

The white oak on Old Jefferson Road, once owned by longtime tree advocate Mary Anne Hodgson, was at least 200-250 years old and was believed to be the second-largest white oak in the state.

ACC Community Forester and Environmental Coordinator Andrew Saunders said he rode by the tree recently and saw vertical cracks in the trunk. The tree had simply grown too big. “That is a sign of the tree literally pulling itself apart,” he said.

On further inspection, Saunders found that the tree had been wounded somehow about 30 or 40 years ago and hadn’t been able to compartmentalize the damage. Two-thirds of the tree had decayed, leaving it hollow inside with only the new growth since the injury remaining.

Saunders said he “agonized” over the decision, but after consulting with three other arborists, all four recommended that the Hodgson family cut the tree down so it didn’t fall over and hurt someone.

Occupy Ordinance: Athens-Clarke commissioners continue to consider an ordinance once aimed at last year’s Occupy Athens protest at City Hall, but the debate has shifted to keeping homeless people out from under bridges.

A February fire in a homeless camp underneath the North Avenue bridge could have caused a gas line to explode, and local officials resurrected the moribund Occupy ordinance as a way to clear out homeless people if they pose a hazard to public safety.

Parks already have set hours, such as sunrise to sunset, but they’re not enforced on the North Oconee River Greenway, and the law doesn’t cover right-of-way that’s not part of the greenway. The commission’s Legislative Review Committee asked ACC Attorney Bill Berryman last week to draft language extending the power to set hours to other public spaces besides parks.

Conversation at the Apr. 16 meeting at times took turns toward the surreal. Girtz raised the specter of “a midnight picnic” outside that most romantic of date-night hotspots, the county planning department. “Good bottle of wine, some hummus,” Girtz said.

Lumpkin also provided this interesting tidbit: When police respond to complaints about panhandlers at intersections, they sometimes find hundreds of dollars on them. “It’s a business,” he said. “It’s not just people trying to find a means to live.”

The LRC will continue its discussions next month.

Meanwhile, the Government Operations Committee made little progress on expanding where people can start community gardens and sell produce grown in them.