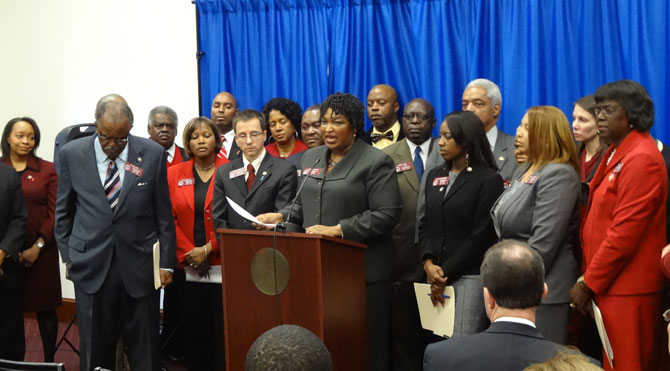 U.S. Sen. Saxby Chambliss’ decision not to seek re-election set off a chain reaction. It’s going to be an exciting year-and-a-half for local political junkies.

U.S. Rep. Paul Broun (R-Athens) has been privately telling folks that he intends to run for Senate but had made no formal announcement at press time. However, his wife, Niki, may have spilled the beans. She got up and told a gathering of Gwinnett County Republicans last week that, yes, her husband will be a candidate.

Broun did make an announcement on Monday—he’s accepting entries for a congressional art contest, which got Pete and me excited until we realized what it was. He was scheduled to make a formal announcement at the Grand Hyatt in Buckhead today, meaning Athens voters will not only have to select a new U.S. senator, but a new congressman and maybe a state senator as well. Fun for the whole family!

Former Athens-Clarke mayor Doc Eldridge, who nearly ran for Congress in 2007, is not interested in Broun’s seat. But state Sen. Bill Cowsert (R-Athens) is. “I am going to consider that congressional race if Paul Broun does run for higher office,” Cowsert said last week, pointing to the dysfunction in Washington. “I’m very, I don’t know the word, disturbed or concerned about the job the United States Congress is doing the past five or six years.”

And if Cowsert does run, that leaves an opening for everyone’s favorite ex-state representative, Doug McKillip, who is longing to return to politics after Athens-area voters kicked him to the curb last year. “It’s too early,” McKillip said. “I am considering all options, discussing those with my family, and am holding off on making any decisions right now.”

DEMOCRATS’ AGENDA: Republicans are likely to win all the races listed above, since Georgia is a conservative state, and Republicans have drawn most of the districts to all but guarantee victory. One way Democrats can claw their way back from irrelevance is to introduce popular legislation to make a political point, even if it stands no chance of passing unless the GOP majority co-opts it.

On the economy, Democrats are rolling out a bill this year to require state agencies to buy American- and Georgia-made goods whenever possible.

On education, they have proposals to let students at Athens Tech keep their HOPE grants with a 2.5 grade point average, ban cyber-bullying and ensure that wealthy parents aren’t abusing tax credits intended to send poor kids to private school.

They’re also introducing bills to repeal some of the 2011 immigration law’s more controversial provisions, like one requiring small businesses to verify new hires’ citizenship and another requiring thousands of professional license applicants from hairdressers to veterinarians to prove their citizenship year after year.

A couple of bills would protect homeowners from foreclosure. Another would help low- and middle-income families pay their energy bills.

But maybe the most popular one would bar your boss from demanding access to your social media sites. No more furiously untagging Facebook photos of last night’s party! Yay!

GUN CONTROL: Democrats also dropped a gun control bill that would close the gun-show background check loophole, institute a five-day waiting period and make it harder for people who’ve been involuntarily committed to get a concealed-carry permit.

Common sense, right? Not to state Sen. Barry Loudermilk (R-Cassville), who introduced a bill last week to lower the minimum age for a concealed-carry permit from 21 to 18. That’s in addition to bills sponsored by freshman Rep. Charles Gregory (R-Kennesaw) that would let people carry concealed weapons in churches and on college campuses. Kennesaw, by the way, has a law requiring all heads of households in the city to own a gun.

Guns are a hot-button issue due to the recent spate of tragic school shootings, but don’t expect to legislature to do anything except talk. There’s nothing to gain politically by restricting or expanding gun rights.

DUMP CHIP: Outrage is growing over the cushy new job at Georgia Public Broadcasting that Gov. Nathan Deal gave former state Senate Majority Leader Chip Rogers. Rogers resigned from the Senate to accept an ill-defined position at GPB, where he’ll draw a $150,000 salary to produce content related to economic development. His resignation paved the way for a Deal ally, Sen. Ronnie Chance (R-Tyrone) to win Rogers’ leadership position. One veteran GPB producer, Ashlie Wilson Pendley, who earned $54,000, has resigned in protest, calling Rogers’ hiring a slap in the face after years of layoffs and cutbacks.

The Athens-based progressive group Better Georgia wants you to tell Deal, GPB President Teya Ryan, the GPB board of directors and all the legislators on the House and Senate appropriations committees to fire Rogers. If you feel so inclined, go to Bettergeorgia.com to spam the whole lot of them.

YOU’RE UNDER ARREST: For talking to ACC commissioners? House Speaker David Ralston introduced legislation last week that would bar lawmakers from accepting lobbyists’ gifts under many circumstances. Sounds great—until you get to the fine print. The bill defines “lobbyist” so broadly that, according to ethics reform advocates, anyone who, for example, emailed all 10 Athens-Clarke commissioners without paying $320 to register as a lobbyist would be breaking the law. Citizens would only be allowed to talk to the elected officials who directly represent them. Members of a subcommittee that held a hearing on the bill last week said they’ll introduce a substitute that will clear up the problem.

ATLANTA HIGHWAY: Oconee County blogger Lee Becker has confirmed that, yes, a new outdoor mall off the Loop at the Oconee Connector is poaching stores from Atlanta Highway. Pier 1 Imports is leaving for greener pastures across the county line. The Gap and The Children’s Place, both with stores in Georgia Square Mall, have applied for permits at the new development, as has Old Navy, although it’s unclear if their Clarke County locations will close.

Commissioner Mike Hamby is chairing a study committee that’s looking at ways to revitalize Atlanta Highway if big-box stores start to flee. It hasn’t met since November. Better get cracking.