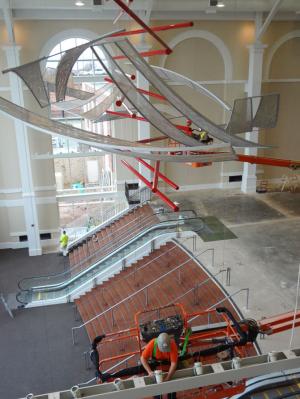 Pro tip: Birds can fly. They don’t need ladders to get to their nests.

CLASSIC CENTER ART: My (admittedly unschooled) opinion of public art is that it’s usually either bland or tacky. The Athena statues downtown and the guitars on the parking deck are a bit too obvious for my taste, and don’t get me started on those painted bulldogs. The cows in Chicago, the shrimp in Fernandina Beach, FL—pretty much all fiberglass animals should be banned, IMHO.

So, I was fully prepared to dislike “Nest,” the new public art installation in the Classic Center, and doubted that the artist, Maureen Kelly of St. Louis, MO, would have anything non-generic to say about Athens, GA. But not only does Kelly’s work, to use technical terms, look pretty cool, it does comment on the history and culture of our city.

Before submitting a proposal for the Classic Center expansion, Kelly had only visited Athens once, for a wedding, but she immediately picked up on how tightly knit we are. “The people were so nice and so warm,” she says. “It’s a fabulous community. That really comes across.”

The design Kelly came up with involves curved fabric-like stainless steel panels arranged in a nest shape meant to invoke a sense of community and remind viewers that Athens was once a textile capitol. Inside the nest is a ladder of red poles, an unintentional reference to the Classic Center’s origins as a 19th-century firehall. (Kelly, unaware of that history, chose red to add color to the beige-and-white room, along with a dash of sex appeal.) The whole thing will be lit up by the sun in the morning and LED lights in the evening, reflecting off the stainless steel and drawing people in from Foundry Street, fulfilling one of the atrium architects’ main goals: creating a front of the massive building on its now-desolate side facing the North Oconee River. It doesn’t get in the way of the view, either.

“I wanted to see something floating over the hills, but never blocking them,” Kelly says.

The SPLOST-funded installation cost $150,000 out of a total $24 million budget for the whole expansion. Kelly took a $15,600 fee for herself; the rest went toward materials and paying her team of construction workers, electricians, welders and lighting designers. Her background is in architecture, and she’s as much a foreman on a job site as an artist (expertise, by the way, that someone local may or may not possess). The Athens Cultural Affairs Commission, which selects public art, also hired a local artist, Jamie Calkin, to paint a mural.

Check out more photos in City Dope online. The public will get its first in-person glimpse of the new atrium, art installation and expanded exhibit hall from 2-6 p.m. Feb. 16. There will be circus performers and jazz bands, too. Feel free to bring a picnic, PR and marketing director Angie Estes says. It’s free, but a ticket is required because space is limited. They’re available at the Classic Center and UGA Performing Arts Center box offices starting Jan. 28.

EAU DE DOWNTOWN: Athens Downtown Development Authority board members have been pushing Executive Director Kathryn Lookofsky to find a solution for downtown’s, shall we say, odoriferous emanations, especially in the summertime, when stale beer, trash-bag leakage and vomit marinate in the heat. Short of hiring a crop duster to spray Febreze over a 20-block area, there’s not much she can do.

It’s one of several issues where the ADDA board and Lookofsky have butted heads, leading to the mutual decision last month not to renew her contract when it expires in June. A recent ACC audit absolves her of responsibility, putting the blame on business owners for not cleaning the sidewalks and the county commission for not fully funding the Solid Waste Department.

Two full-time and two part-time litter technicians clean up downtown from 5 a.m.–2 p.m. seven days a week. They pick up litter, empty trash cans, remove grease clogs and pressure-wash sidewalks. Even as the number of bars, restaurants and sidewalks has grown by half over the past 10 years, the level of service has stayed the same.

“This level of service appears to be inadequate given the high volume of usage during the evening and night hours, changes in the mix of businesses downtown and the increase in the number of authorized sidewalk cafes,” ACC Auditor John Wolfe writes in his report.

Wolfe and his staff observed “multiple violations of ACC’s litter ordinance including discarded cigarette butts, broken glass in public planters, other refuse on sidewalks and streets, and the use of glass in the sidewalk cafes. In addition, instances of what appeared to be leakage from trash bags and other refuse containers onto the sidewalks and streets were noted.”

Solid Waste has asked for money to deal with those problems in the past, but the commission has never funded those requests. Wolfe recommends “additional resources for downtown cleaning operations,” as well as laws to clarify that business owners are responsible for cleaning the areas outside their doors and require them to provide a place to dispose of cigarette butts.

Wolfe’s audit also addresses downtown parking, another vexing issue. Although total parking revenue rose from $1.8 million to $2.4 million between 2011 and 2012, he notes that net revenue dropped from $1.1 million to $431,000 due to the new West Washington Street deck’s debt service and operating costs. The increase in total revenue he attributes to raising the cost of parking and expanding the hours when ACC charges to park. Meanwhile, revenue from the College Avenue deck is flat, even though fees are higher.

In other words, more people aren’t parking downtown, they’re just parking in the Washington Street deck instead of the College Avenue deck. Why did we build that new deck again? Oh, well, at least we got a Waffle House out of the deal.

On top of that, three different branches of government—ACC, the ADDA and the Classic Center—run the four downtown decks, so ACC is essentially competing against itself. The solutions, according to Wolfe, are to adjust rates based on demand and consider putting all parking under ACC control.

BUENA VISTA: After postponing it once in November, Athens-Clarke commissioners have decided to put off a vote on the Buena Vista Heights historic district for yet another month.

Commissioner Kelly Girtz proposed reducing the size of the district from 76 to about 50 homes, removing some property owners who oppose the designation as well as some mid-century houses that aren’t part of the original neighborhood, built as a streetcar suburb in the 1890s. He said he plans to continue tweaking the borders in the coming weeks. With a Feb. 5 vote looming, several commissioners said they’re not comfortable adjusting the lines on the fly.

A moratorium on demolitions in Buena Vista, also approved in November, expires at the end of the month, but individual commissioners can put holds on demolition permits for 90 days. “Let’s not put this off [so] long that something will happen we’ll feel sorry for,” Commissioner George Maxwell said.

BLACK HISTORY: A less controversial item on the commission’s agenda last week is naming the ACC Police Department’s Baxter Street substation for Donald Moon and Archibald Killian. It’s been 50 years since what was then the Athens Police Department hired Moon and Killian, the city’s first two black officers. “They were the finest, at that time, that the police department had,” Maxwell, Athens’ third black officer, said last Thursday. Moon was killed in the line of duty, but Killian, now a reverend and radio host, is still kicking.

PARK AND RIDE: Eastside residents can say goodbye to the hassle of trying to find parking downtown. A free park-and-ride lot on Oconee Street—AKA that big mudhole you’ve surely noticed inside the Loop cloverleaf—opens at 11 a.m. Thursday. For $1.60, commuters can hop on a new shuttle that will run from the lot to Park Hall, the Arch and back every 20 minutes from roughly 7–9 a.m. and 3:30–5:30 p.m. on weekdays. Hourly buses will serve the lot during non-peak hours. If ACC ever finishes a long-awaited rails-to-trails project, suburbanites will be able to drive halfway to downtown and bike the rest of the way, too.

DOWNTOWN TRAFFIC: And when Selig Enterprises builds its mammoth mixed-use development off Oconee Street, we’ll need all the help we can get. It will generate 5,833 car trips a day, according to documents the company filed last week with the Northeast Georgia Regional Commission, a state planning agency that advises local governments on major developments.

A full traffic study hasn’t been done, but Selig will submit one to ACC as part of a variance application in the next few weeks, county planner Gavin Hassemer says. The regional commission recommendation should come around the same time, setting up the ACC Planning Commission to hear Selig’s request at its Mar. 7 meeting.