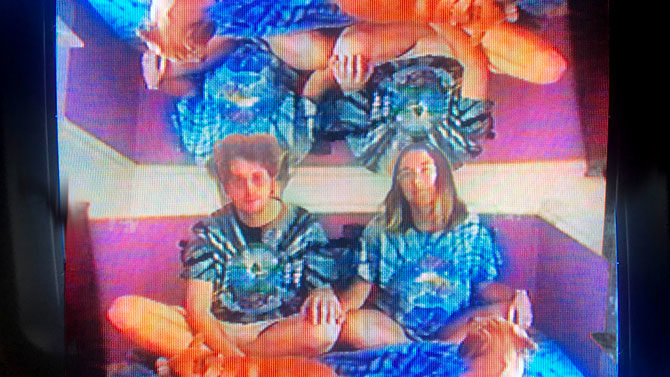 NESTING TIME: I have no idea how this slipped under my radar, but Father Werewolf released its debut album, Red Bird, back on Apr. 1. Composed of longtime Athens rockers Mandy Branch, Forrest Leffer and Christian Phily, the band strikes the tuneful three-way intersection between early punk rock, ‘90s college radio and melodic math rock. And while I wouldn’t exactly call this retro, there does seem to be a profound sense of rejection and embrace—the former being a jettisoning of the modern world, and the latter a soft but deliberate folding of oneself into patterns of nostalgia driven by muscle memory. I’m most taken by the tracks that float their melodicism as a banner, like the title track, “Please Don’t,” and “Inner Pool.” Truth be told, this is enjoyable from start to finish, and, for listeners of a certain age, this will sound—counterintuitively—both of a certain time and timeless. For everyone else, dig at your own speed. Check this out now over at fatherwerewolf.bandcamp.com.

HOME REMEDIES: Phelan LaVelle and Greg O’Connell, each of Athens’ bedrock psych-dealers Shade, just released a self-made “quarantine album” under the moniker PPP&G. The extra Ps are for Peavey and Poco, who are presumably the sweet dogs featured on the cover art. And if they’re not, well, they should be. The five-song release is self-titled and a very mellow, lightly psychedelic pop excursion. There are a couple of dips into art-rock rhythms (the bass line of “The Watch,” for example), but mostly this is really relaxing and doesn’t require a whole lot of attention. It’s almost as if PPP&G, even while in quarantine, never stopped anticipating an endless summer. All in all, not a bad project. Plan your picnic over at pppg.bandcamp.com.

AT A TIME AND PLACE: The Electric Nature roars again this month with the release of the two-track, 40-minute Forest Wisdom. Assuming its familiar position between specificity and vaguery, all we know about this record is that it “was recorded live to cassette sometime in the last 20 years, somewhere in the state of Georgia.” Also as usual, the core trio (Michael Pierce, Michael Potter and Thom Strickland) make ready art from improvisational sounds that are layered such that they always total more than the mere sum of their parts. The first side of this flows forward dreamily, with electronics creating illusions of wind, gull squawks, etc. This bleeds over for a moment into Side B, which quickly moves into primitive free jazz and string scraping before delivering some quick wow and flutter, and then shutting down completely. In the full scope of the vastness of The Electric Nature’s catalog, this is likely not essential, but it is a nice introduction to what’s going on if you’ve never been introduced to them before. Introductions are now happening on an ongoing basis over at theelectricnature.bandcamp.com.

HEEEEREEEE’S MICHAEL!: In related news, the aforementioned Michael Potter (Garden Portal, Null Zone) has started a cool web series named Garden Portal Presents that streams each Thursday evening at 7 p.m. It features Potter as host, talking about whatever he wants (label news, music, etc.), and then features largely pre-recorded main guest spots of featured musicians and artists. The series will be nearly a month old by the time you read this, and this week’s show features the Magic Tuber Stringband (North Carolina). Upcoming shows will feature Ariel Ackerly, Boston’s Rob Noyes and New York’s J.R. Bohannon, and some select local performers. Because YouTube links are completely unwieldy I’ve gone ahead and shortened the one for Garden Portal Presents, and here it is: bit.ly/2WHkRwF. So, enjoy!

HEY, HOW YA DOIN’?: It’s been over a year since Sean McDonald (MMM Sound) had a dedicated release from his long-running project Heat Sureens, but he’s come back into focus with the new single “Good Morning.” Largely built from vocal loops and echoes, there’s not a lot of meat on these bones, and the song is sparse even where its parts are crowded. The overall effect is that of someone whispering quickly in your ear, then dashing away before you can discern what they said. While this may not be the most compelling release in Heat Sureens’ pile of releases, it was a nice reminder to go back and visit McDonald’s prodigious output from over the years. Consider this your reminder, too, and head to mmmsound.bandcamp.com to dig in.