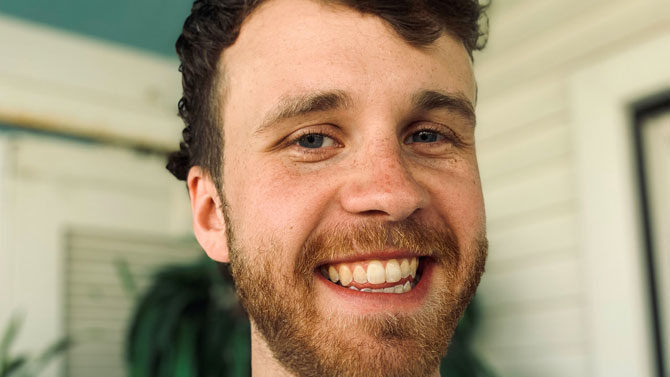 NEW CHEESE SPACE: It’s been just over two years since I had anything to say about indie project Happy Cheese, and as best I can tell, it’s been about that long since they had anything to say, as well. The first new collection of Happy Cheese songs since November 2017 appeared last week, and it’s named Bellyache. Yet again, the chief songwriter is mysterious, and the contributing musicians are basically unidentifiable. Also yet again, this is a really nicely crafted and delivered collection of tunes that are singer-songwriter oriented but arranged in different styles, from folk to lo-fi pop to even slight ragtime. This is the kind of turned-inward art that feels no need to announce itself, because the accomplishment is in the doing itself. Musical touchstones here are slight but recognizable. This is a headphone album that’s arriving just before the weather is nice enough to sit on the porch at night listening alone. So, for now, you’ll have to absorb its soft beauty and sweet/sad lyricism indoors. Highlights are “Chomper” (“There’s a hole where his head used to be/ There’s a shoulder she used to keep company”), “The First Time” and closing instrumental “Retiredman.” Go get this at happycheese.bandcamp.com.

AVAILABLE NOW: The long-awaited compilation LP Classic City Wax, Vol. 1 won’t have its official release party until Feb. 22 at the Caledonia Lounge, but you can go ahead and grab a copy now. The fresh mix features tracks by LG, Motorhead 2x, Ishues, DK, Cassie Chantel, Squalle, LB, Kxng Blanco, Caulfield, The YOD and Linqua Franqa. The project was truly a community project, with costs covered by an Arts in Community grant from the Athens Cultural Affairs Commission. Manufacturing was handled by Kindercore Vinyl, Jesse Mangum did the mastering work, and the cover art was done by local graphic designer Larry Choskey. Copies are available for purchase at Wuxtry Records downtown. Hats off and hands up for everyone involved in bringing this project to life.

THE BOYS ARE BACK IN TOWN: After a furious and successful tour up the coast, both Georgia Dish Boys and compatriots The Pink Stones are back in town. On Feb. 7, them Dish Boys will finally release their full live album, Live in Classic Town. It was recorded way back in December at the Caledonia Lounge by Sloan Simpson. Live sound was handled by Gene Woolfolk. In celebration, Georgia Dish Boys, The Pink Stones and Ohio’s Lindsay Jordan will play Flicker Theatre and Bar on Wednesday, Feb. 12. Although it’s not really billed as a release show or anything like that, we both know it’d be pretty rude of you to not give ’em all a big hug of congratulations and maybe pick up a copy while you’re there. Get up to speed at georgiadishboys.bandcamp.com, thepinkstones.bandcamp.com and lindsayjordanmusic.com.

SWEEP THE DECKS: In the liner notes for the new collection from DJ and producer Killa Cabbi, the confession comes hard. To wit, “It has gone and happened. I have went [sic] and recorded so much music I can’t even keep track of it anymore.” So, that means both the first track (“Unknown”) and last track (“Unknown 2”) are chalked up to his collaboration with a mystery guitarist whose name can’t be remembered and a recording session from 2012. In between these casually looped tunes are four tracks that are really kind of rough demo-type things recorded, for the most part, so low that it’s a struggle to try to enjoy them. The accordion-based “Coushatta” has some legs, though, and is a cool little shift from Cabbi’s usual choice of instrumentation. Hear for yourself at echobassrecords.bandcamp.com.

SING OUT!: Classic City Jazz is hosting open auditions Wednesday, Feb. 5 (5–7 p.m.) and Thursday, Feb. 6 (6–7 p.m.) at Hodgson Concert Hall. Classic City Jazz is UGA’s premier—and only—jazz vocal group, and they perform a cappella as well as accompanied. You need to sign up for a 15-minute audition slot, and if you’re interested, fill out the Google Doc here. For all other information, see facebook.com/classiccityjazz.