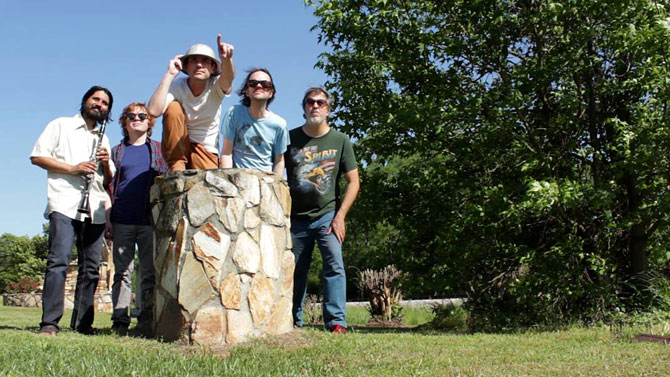 VAULT LINES: It’s been just shy of a thousand years since any new music was heard from experimental-ish and moody Americana band Old Smokey, but this grievance was redressed a few weeks ago, when the band released a full-length, Sundowners, via Athens label Cloud Recordings. Truth be told, this album has been sitting around for a while. Member Rob Lomax told me, “I think we began tracking it in December 2015 and finished it the following year.” The band as such doesn’t really exist anymore, due to member Jacob Morris moving to North Carolina a while ago. But the faithful will appreciate that this record features the band’s classic lineup of Morris, Lomax, John Fernandes, Jim Willingham and Jason Trahan, and was recorded, as per usual for Old Smokey, with Zeke Sayer at Gypsy Farm. The 12 tracks here are well chosen and sequenced just right for dusky evenings. Especially compelling are the klezmer/spaghetti Western stomp “Taut,” the slow funeral march of the title track and the pop abandon of “Faulty Thinking Lines.” Recommended if you dig backroom card games or the scent of old bookstores and have, at one time or another, really tried switching from coffee to tea, but it didn’t take. Check this out at cloudrecordings.bandcamp.com.

LOGIC PROJECT: Athens-by-way-of-Macon rapper Conscious Astro has a new seven-song record out named Wine and Circus. Notable guest appearances come courtesy of Louie Larceny and Zac Chase. Astro released this via Loud Logic Studios, which is the label he runs with producer C. Durango. Now, with the hard facts outta the way, let’s dig in. This is less an album than a collection of tracks, which is to say, it doesn’t feel deliberately sequenced or arranged in any particular way to facilitate flow. The tracks are kind of hit and miss, but when they hit, they hit hard. For example, both “Loathing the Fear” and “Movement” are pretty killer standalone tracks that would make a fine double A-side single. Go ahead and throw the proto-hardcore “God Sends” into that group, too. Lesser songs include the high-pitched “The Loop” and the meaningless filler of “Boom Bap Space Rap”. It’s difficult to wish that an already short album had been edited further, but sometimes those are the breaks. Either way, check the dude out at loudlogicstudios.com and soundcloud.com/consciousastro.

BUY YOU SOMETHIN’: Athens’ most polite and legendary record headhunter and all-around solid dude Kurt Wood is having another instance of his famous Front Porch Record Sale. As its name implies, the whole thing takes place on Wood’s front porch at 1080 Oconee St. Prices start in the super low $1 area and, of course, go higher based on all the normal things like rarity, condition, etc. There are literally thousands of items for you to dig through, and the whole thing happens Saturday, May 4 from 9 a.m.-6 p.m. and Sunday, May 5 from noon–6 p.m.

ENVELOPE, PLEASE: The finalists for the 2019 Vic Chesnutt Songwriter of the Year Award have been announced. In the interest of full disclosure, I should let you know that I was one of five judges for this year’s award. Before I mention the nominees, let it be said that everyone who submitted a song this year deserves to be recognized for their talent, organizational skills and creativity. With that, this year’s finalists are Lydia Brambila (“Sirena”), Don Chambers (“The Last Thursday”), Carly Joy King (“Just Listen”), Greg Meredith (“Mirrors”) and the late Ross Shapiro (“Possibilities”). The nominees will perform at this year’s award ceremony, with Shapiro’s song played by his bandmates in The Glands, Joe Rowe and Doug Stanley. The event takes place Thursday, May 16 at The Foundry. For more information, see classiccityrotary.org.

THIS IS THE MODERN WORLD: Nicholas Mallis released his newest album, Artificial Irrelevance, earlier this month, and it’s a total gem. Although deeply steeped in the 1980s mod revival and kitchen-sink R&B, it’s less an album out of time than it is timeless. Opening Track “Habitable World” is jittery, detached and cool; “When the Machine Stops” is deeply blue-eyed and soulful in the same vein as Paul Weller (The Jam, The Style Council); and the sweeping guitar refrain from “To Think We’d Cross the Nile” recalls mid-’70s Eric Clapton in a nice and not irritating way. Take a big ol’ bite of this at nicholasmallis.bandcamp.com.