The Fountains Get Streaming, and More Music News and Gossip 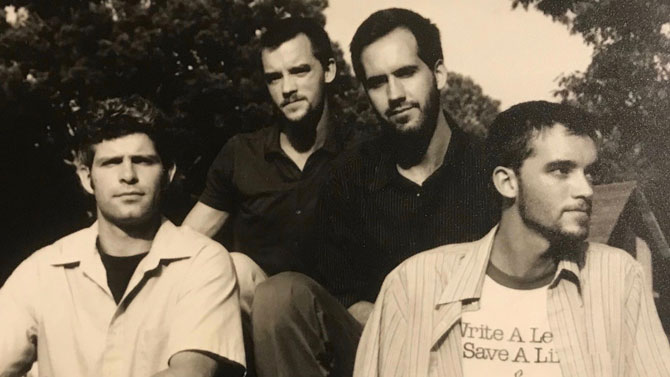 WHILE YOU WERE SLEEPING: One of the most steadily prolific Athens bands of the last 30 years has quietly released its entire catalog online. Time was, every couple of years, you’d see a new album by The Fountains pop up in local record stores. Now, everything from their beginning as an acoustic duo (1994’s Welcome) though their full-band alt-pop heyday (Stamp, 1995; Ideal Amusement, 1997; Diamond Wheel, 2000) to their final album (Roadsigns for Astronauts, 2002) is available at your fingertips. While you’re looking these up, go ahead and click on founding member Jeff Andrews’ album (credited to Jeff Andrews and Blessed Unrest), The Twoâ€‹-â€‹Part Dream of a Curio Dealer, which came out in 2008. This is all gonna take you some time, so finish reading this column and head over to thefountains.bandcamp.com.

WAITING TO EXHALE: The debut two-song release by Abby Crerie (ex-Deer Eyes) came out at the end of last month. There isn’t much to go on here, but what there is shows a lot to look forward to. The most immediate local comparison would be a slight similarity to Four Eyes. These tracks, “Inner Dialogue” and “When,” are initially deceptively simple. But Crerie’s songcraft, which is heavily melancholy in a Saddle Creek Records way, is layered and well produced. An especially bright highlight is the semi-rousing way “When” increases in intensity after the two-minute mark. Again, not a lot to go on here, but it’s a pretty good starter nonetheless. Check it out at abbycrerie.bandcamp.com.

JUST HANGING AROUND: Once upon a time, longtime Athens musicians Lauren Gregg (Soft Teeth) and Lucas Jensen (Big Gray) had this project named Woodsy Friends that wrote a bunch of songs about, well, little animal friends in the woods. If I’m not mistaken, it was the soundtrack to a book of the same title, but I’m not sure if the book came out. Anyway, the full album is now available online. It’s admittedly a little precious and, if crafted by weaker hands, it would be nearly unbearable. However, this is such a gem of a pop treat that every heart will grow two sizes hearing it after all this time. It’s also got a fairly wide-ranging assortment of Athens all-stars on various tracks. Primarily, it hikes a musical nature trail informed by new wave, some 1970s AM Gold and 1990s indie pop. I guess the thing I dig most about this is, while on its surface it seems very straightforward and childlike, there’s also a really out-there phenomenon à la Ken Nordine’s Colors happening. Check it at woodsyfriends.bandcamp.com.

NOW HEAR THIS: A very special performance by Chinese classical guitarist Xu Tuo happens Thursday, Apr. 25 at Flicker Theatre and Bar at 10 p.m. Opening the show are players who have studied with Daniel Bolshoy, a guitar lecturer at UGA’s Hugh Hodgson School of Music. A really cool aspect of this particular performance is that Xu will play selections from a recital he did at the Performing Arts Center only Tuesday. And y’all get to see it at Flicker, you lucky ducks. Choices for inclusion are works by Bach, Mauro Giuliani, Leo Brouwer and Sergio Assad. Xu is a guitar professor at China’s Central Conservatory of Music and has a list of achievements as long as my arm. And, yeah, I don’t normally write about out-of-town artists in this column, but the next time you travel from China and bring your massive amount of talent to Flicker, we’ll talk.

TICKLIN’ THE IVORIES: Musician Joseph Wallace works under the name F.L.E.D. and has released no fewer than five albums in the past year. I don’t have time or space to write about each of them, so I’ll just mention the newest, Worse. Its 15 tracks are largely keyboard-driven, but also very singsong-y in a house-party kind of way, or maybe in that way your friend who’s a college-radio DJ keeps telling you they’ve released a “mixtape” you’ve just got to hear. Lyrically, this is pretty much like diary entries, which Wallace admits is the case. It’s often barely this side of twee, but it avoids that abyss, because it’s really not all that gentle with itself, and although it’s highly personal, it’s not either particularly defensive nor self-effacing. Musically, it’s occasionally too clever by half, and Wallace often has very crowded arrangements. All that said, if this were a little shorter and had a heavier thumb on the editing scale—and led with a track like “Bike,” which is catchy as hell—I could go in for it a lot more. Your mileage may vary. Hit the gas at josephtwallace.bandcamp.com.