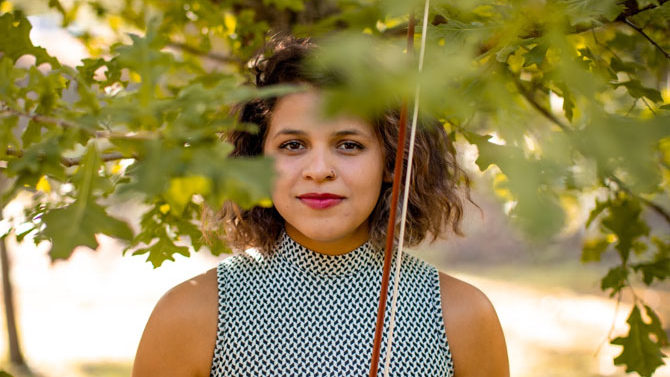 HORSE HAIR DON’T CARE: Michael Potter’s Null Zone label hits the sweet spot once again with the new album by violinist and composer Sahada Buckley, recording under the name skinned or sunburnt. This comes out officially on Feb. 22. It’s titled skinned, and it pretty much shines throughout its 12 tracks. Constructed very much like an old-school jazz record, where it’s Buckley’s showcase but relatively unimaginable without its full-combo presence, to call it tasteful would be to impart that it’s somehow easygoing. It’s not, even though it does have several instances of challenging joy. To wit: the propulsive beat behind the otherwise smooth “Ethereal Green,” the early-morning crow of “Out of Water” and the peace-interrupting shrieks, wails and howls that scare up right in the middle of “Temper Tantrum.” Buckley will play an early release show for this Thursday, Feb. 21 at 9 p.m. at Go Bar along with some special guests. Get there on time, as it’s all gonna be over by 11 p.m. Find this after it’s released at nullzone.bandcamp.com.

MAKE YOUR MARK: The nomination season for the Athens Hip Hop Awards, created and promoted by United Group of Artists (aka UGA Live), is now open and will run until Mar. 5. As is tradition with these awards, there are multiple categories that aren’t related to music per se but, rather, reflect and honor the whole hip-hop community by recognizing restaurants, hair stylists, etc. All that makes for a pretty long ballot, so be sure to set a few minutes aside when you make your nominations (and I’d suggest not trying to do it from your phone). This year, organizers have set aside the day before the awards ceremony to host the Hip Hop Awards Music Conference. This will happen from 3–7 p.m. at a location TBA on Saturday, Mar. 23. The awards ceremony and show happens Sunday, Mar. 24 at The Foundry. For more information and to make your nominations, see ugalive.com.

WAVE AND SAY HEY: Experimental composer and label owner Sean McDonald (MMM Sound) has delivered his final Heat Sureens album for the foreseeable future, as he’s planning to backpack through Southeast Asia and India for the next year or so. So, to fill the space left by his (hopefully) temporary time away from music, we’ve got this new 15-track record named Sunscribe. If McDonald’s gotta say goodbye, well, this is a fine farewell. Having operated largely under the radar here in town, he’s always produced solidly artistic records. While I haven’t loved them all, I’ve got a lot of room for this one. The whole record is an emotional mix of joy and adventure that swells to fill any room. Especially notable are “Plane Across,” “In a Locket” and “Ms. Remember.” The whole thing closes out with the glitchy yet dreamy “Wander Pieces,” which, I suppose, is just so fitting it needs no other descriptor. Click over to mmmsound.bandcamp.com and enjoy.

HOLD YOUR APPLAUSE UNTIL THE END: There’s something happening at the Dodd Galleries that looks to be pretty cool, and it’s even scheduled such that you’ve got the whole night ahead of you if it winds up not being your jam. It happens Friday, Feb. 22 from 6–9 p.m. Billed as “Congealing: A Night of Performance and Poetry,” this multi-talent event takes place inside the Dodd’s current exhibition, Congeal, which is described by Flagpole art critic Jessica Smith as one that “contemplates the comforts and discomforts experienced while living in a body.” Featured performers include AC Carter, Emily Llamazales, Liza Romanovski, Mac Balentine, Ruby Mars, SABO+Kira, Max Rabb, Penske McCormack, Ruth Anne Traynelis and more. It’s free and open to the public. Find out more via facebook.com/ldsoagalleries.

DOWNSTREAM: In semi-related news, AC Carter (aka Lambda Celsius) compiled a killer set of music a couple of months ago in advance of the upcoming Ad·Verse Fest, which happens locally Mar. 1–2. Featuring tracks from 23 artists to be featured during the two-day, three-venue event, it’s a highly digestible and well-organized point of entry for anyone who’s curious. While the whole thing is well worth any time given it, I was partial to the tracks by Sarah Swillum, RaFia, Jennifer Vanilla, Caleb Craig and Fraternity as Vanity. Dig it at soundcloud.com/lambdacelsius/sets/ad-verse-fest, and learn more about Ad·Verse at adversefest.space.