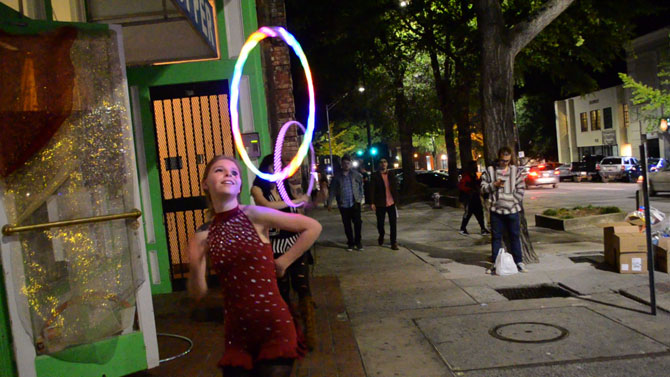 LEND ME YOUR EARS AND SHOW ME THE MONEY: The Classic City Fringe Festival is launching a very modest fundraiser via Kickstarter on Thursday to raise operating funds for its fourth annual event. The nonprofit, which is seeking a mere $500 (though of course you can continue to donate past that point), is offering up all sorts of donor rewards, from puppets to bumper stickers, posters, CCFF/Terrapin pint glasses and more. Higher-level donations will receive passes to the festival, which runs Oct. 18–21. Additionally, as the total dollar amount increases, more rewards will be released. (At $500, passes to secret events are released; at $1,000, limited edition T-shirts happen.) While in the grand scheme of things $500 isn’t an absolute boatload of money, it’s also not exactly chump change for most folks. What I like so much about CCFF’s effort is its ability to clearly identify its essential expenses—which are no doubt several multiples of this amount—its enthusiasm for bringing in artists from around the nation and overseas, and its clear willingness to create relevant rewards for its target customers. So, donate a few bucks at classiccityfringefestival.com.

CHROMATIC PIPES: A new 12-piece collection by Skinned or Sunburnt, the vehicle for the writing of composer/vocalist/violinist Sahada Buckley, is out now, and it’s titled Skinned. I’m less familiar with Buckley’s work than I should be, but I feel like this may be a good primer. She’s joined on this collection by pianist Brad Bassler, drummer John Norris and bassist Jamie Thomas, all of experimental group Thunder O(h)m! Bass clarinet (and regular clarinet) player Kathryn Koopman rounds out the bill, and also handles mixing and editing duties. Although the record is undoubtedly composed and performed by serious musical personalities—and is challenging enough to spur interest or unease within the uninitiated—there’s also a taste of the whimsical. These moments are mostly realized through the very occasional use of harmonica, but also little bursts of full-group performance and undeniably melodic and traditionally rhythmic sections. Dig it the most at skinned-or-sunburnt.bandcamp.com.

ARRGH!: Veritable Athens supergroup Cosmo Jr. just put the final touches on its newest record, Sisters in Arms, with engineer Jason NeSmith. It’s a full-length pirate opera soundtrack featuring the stories of the lives and times of real-life pirates Anne Bonny and Mary Read. The record features four songwriters, including Atlanta new-wave legend Kevin Dunn. Cosmo Jr. will celebrate the album’s release at its second annual Talk Like a Pirate Day at The World Famous Wednesday, Sept. 19 at 10 p.m. The band will perform the full opera onstage, but exact plans for staging it are yet to be determined. So, show up and let ’em surprise you. You know, like actual pirates. For more information, see facebook.com/cosmolot or cosmojr.bandcamp.com.

HERE, YOU HOLD THIS: Now-occasional Athenian Daniel Tanghal just released a whopper of a record named August, which was all written and recorded with Julia Valdes. There are 31 (!) songs that alternate between acoustic and electric instruments, and nearly each is signature Tanghal. That is, they’re wildly catchy with more than a little taste of instantaneous compositional flavor. Although I’m certain that both he and Valdes, like most songwriters, concentrated and sweated over at least a few of these, there’s an overwhelming sense that this stuff just falls from Tanghal’s mouth and hands effortlessly. I hate to make such an obvious comparison with regard to prolificacy, but Guided by Voices is a good place to start both in terms of sheer volume of work and sense of melody, brevity and urgency. Check it out at danieltanghal.bandcamp.com.

SIT OVER HERE: As detailed elsewhere this week, J&J Flea Market is presenting its first annual J&J Music Festival Saturday, Sept. 15 from 10 a.m.–6 p.m. It’s sponsored by rail and real-estate company CSX, and featured bands for this first go ’round are FredX (10 a.m.), Sound Medicine (11:15 a.m.), Magnolia Wind (12:30 p.m.), Daniel Hardin (1:45 p.m.), Foster (3 p.m.) and Universal Sigh (4:30 p.m.). Some old-timers will remember several decades ago, when the J&J Center held numerous concerts with large-scale touring acts, regular packed dance nights and more. Although this special event is not as sizable as those regularly occurring ones were, it’s pretty neat to see the name J&J associated with live music again.